CULTURE The boy who learned to dance to a different beat

The boy who learned to dance to a different beat 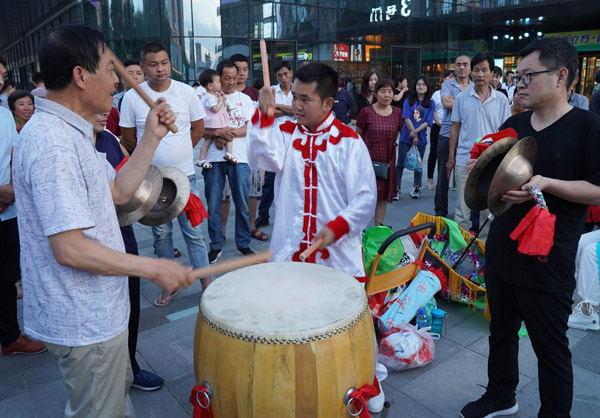 While square dancing and its omnipresent boomboxes entrance huge swathes of the Chinese population, it is an ancient form of movement and music that keeps others preoccupied

When Chen Zhichao, 23, ends his long work day at a medical college in Xi'an, Shaanxi province, he eschews the kinds of places many of his peers repair to, such as bars, cinemas and shops. Instead, he goes to a square on the southern part of Big Wild Goose Pagoda, a landmark in Xi'an built during the Tang Dynasty (618-907).

There he meets a group of elderly people who with him are members of a yangge dance troupe.

Four times a week they start dancing yangge at 8 pm with Chen as the team leader playing the main drum beat. They dance in circles, waving colorful silky fans and umbrellas in the air. With big smiles on their faces, the dancers usually draw a lot of attention, and often those taking pictures of them even join in on the dancing.

"Ninety percent of the dancers are retired, and yangge is a major entertainment in their lives," says Chen, who heads four yangge teams in Xi'an with more than 300 people." 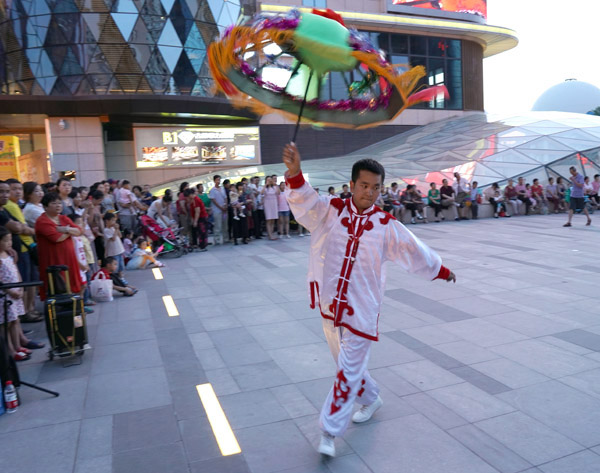 Yangge is a Chinese folk dance popular in northern China dating back to the Song Dynasty (960-1279). In 2006 it was listed as a national intangible cultural heritage.

Yangge dancers traditionally wear colorful costumes and dance to a live band, which has musical instruments, such as drum, trumpet and gong. Waist drum, silk fan and silk ribbon are used during the dance among others.

In square dancing the sound accompaniment is often thumping dance music played from a portable boom box, but yangge needs a live band, which is dominated by drum beats, Chen says.

"Yangge represents a collective aspect of Chinese culture, and it's a typical Shaanxi culture," Chen says.

Chen, born in Fuxian, Yan'an city, Shaanxi province, became interested in yangge dancing after he watched a performance at a local temple fair when he was 7 years old. 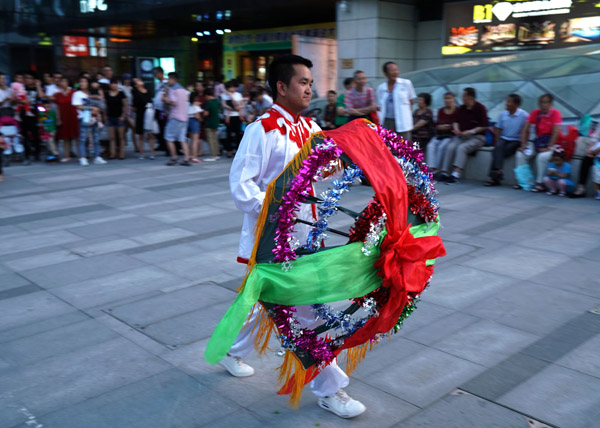 "The music was loud and I was so happy that I danced with the troupe. At first I just imitated their movements, but once I understood the drum beats I started creating my own moves.

"My parents were with me and they just laughed, like other adults there, since it was wonderful to watch a little boy dancing yangge. From then on I went to watch many yangge dance performances when troupes came to my village. I danced with them and they taught me how to play the instruments."

Yangge dancers were invited to perform on special occasions, such as weddings, funerals and the official openings of businesses, he says. It is a tradition that lingers in his village to this day.

In 2015 Chen went to Xi'an to study at Xi'an Medical University, where he now works.

He founded a yangge troupe at the school that now has more than 100 members. He spends his spare time choreographing and rehearsing programs for the troupes he leads.

The self-taught young man says he is against the idea of combing yangge with other art forms, such as contemporary music and dance moves, "because the so-called innovation will harm the tradition".

"It's important to keep yangge authentic," he says. 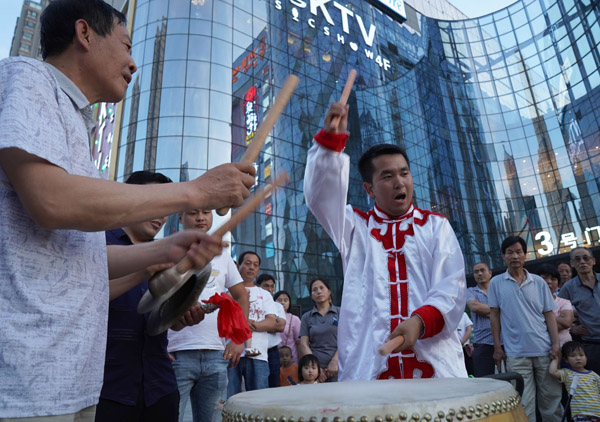 Bai Qingye, a member of the yangge dance troupe, named huangtudi (yellow earth), which dances near the Big Wild Goose Pagoda every weekend, says: "He is the main drummer as well as the conductor of the team. It's rare to have such a young man performing in a yangge dance troupe now."

"Children from Shaanxi have the talent for yangge dance because it's in our blood. It's a healthy exercise and a fun way to meet friends. Contemporary entertainment challenges yangge, but I'm glad to see that thanks to Chen young people are joining us."

One of the young members of the team is Wang Min, Chen's girlfriend. They met when Chen played drum near the Big Wild Goose Pagoda about a year ago.

"It was love at first sight, and she shares my passion for yangge," Chen says.