CULTURE The 'cinema for the blind' that will never close

The 'cinema for the blind' that will never close 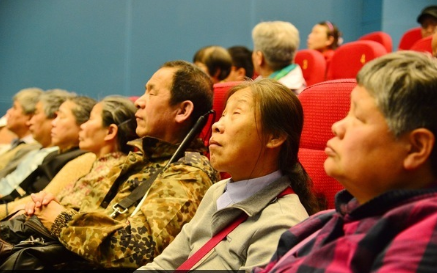 While many Chinese watched movies at cinemas during the weeklong Spring Festival holiday, Zheng Wei explained the film The Spring Festival to an audience of visually impaired people at a cinema in Northern China's Tianjin.

"Fireworks light up the dark on New Year's Eve, and children are playing in an open place covered with white snow," said Zheng to the audience, describing the visual elements of the movie while holding a microphone and a script.

As the founder of "cinema for the blind" in Tianjin, the 55-year-old has insisted on brightening the dark world of the visually impaired in his own way for 11 years.

Shao Yuxiang and her husband, who are both blind, are regular visitors of the cinema. She wore an elegant yellow sweater to attend the couple's significant "movie day".

Since October 2007, the free movies, which are described through audio, start at 9:30 am on the third Saturday of each month. More than 150 movies have been screened to more than 20,000 visually impaired people so far.

"The theater is equipped with lights, a sound system, projector, and a big screen to give the blind a complete and equal movie experience," Zheng said.

In 2007, after having learned that a "cinema for the blind" established by Wang Weili had benefited many visually impaired people in Beijing, Zheng rushed to Wang's establishment for advice.

Under Wang's guidance, Zheng built a new cinema in Tianjin and screened The Dream Factory by Chinese director Feng Xiaogang. It attracted more than 50 visually impaired people from different districts and even suburban areas in Tianjin.

Special movies for certain Chinese festivals are also part of Zheng's selection criteria. "For example, The Founding of a Republic is specially for National Day. Now, films for Spring Festival are on my agenda," Zheng said.

To ensure the quality of the movie experience, Zheng has to prepare and practice in advance. Zheng would draw "relationship maps" to fully understand the film. Then, he may edit the movie and recombine some plots.

"Some movie plots have many twists and turns which are presented through pictures, but blind people would have no clue what is going on," Zheng explained. He also said that the scenes, costumes, actions or even emotions on the actors' faces are added into the audio descriptions to help the visually impaired understand the story.

Zheng uses natural pauses in the dialogue or in between critical sound elements to insert narratives that translate the visual images. "The longest script I wrote was around 8,000 words," Zheng said.

Zhang Haoyun, 22, a volunteer with the Tianjin Medical University, said Zheng helped him promote the "cinema for the blind" to more places in the country including Shaanxi and Hebei provinces.

Zheng hopes to continue his work until he is 80 years old, and looks forward to seeing more young people join him to light up the dark world of the blind.