CULTURE The coming of age of Chinese fashion

The coming of age of Chinese fashion 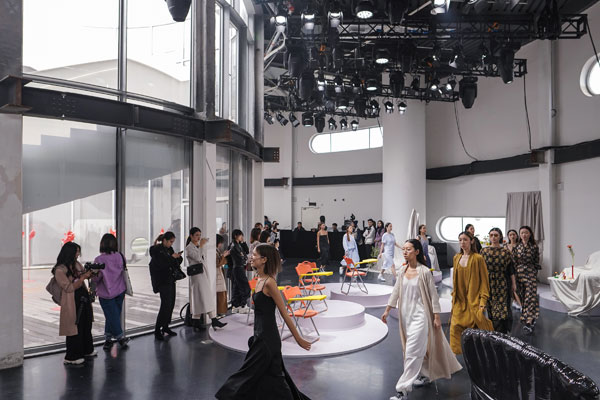 More than 20 bloggers and influencers take to the runway to showcase the Fall/Winter 2019 collections of five local designers including Ming Ma, Yirantian, Sarayun and Samuel Gui Yang at China Styling Bloggers, an event organized by Labelhood, as part of the Shanghai Fashion Week at Tank Shanghai on March 31. (Photo: China Daily)

Buoyed by strong backing from global organizations and the mature digital landscape in China, the local design community can now flex their creative muscle for all the world to see, Alywin Chew reports in Shanghai.

China's fashion scene might not be as mature as its European counterparts, but its growing presence in the global fashion network shows that it is quickly coming into its own, according to industry insiders.

One of the most obvious examples of this is the evolution of the Shanghai Fashion Week, says Caroline Rush, the CEO of the British Fashion Council who was recently in Shanghai to attend the event.

"When I first came to Shanghai Fashion Week in 2014, there was only one tent in Xintiandi and a few events scattered around. Now, you can find the fashion week has taken over the city. You can see so many more collaborations with international partners being made," she says.

Adrian Yu, a buyer for luxury retailer Lane Crawford, points out that Chinese designers such as Liu Min, the founder of fashion brand Ms Min, encapsulate the evolution of the Chinese fashion scene through the years.

"Ms Min started out very small but they now have stores all around the world. It is one of those brands that have put the Made in China label on the international stage. Chinese designers are also frequently appearing at Paris Fashion Week and showing their creations to international buyers. Some have even been scouted by influential stores in Europe. This is all very promising for the Chinese fashion sector," he says.

A new development at SFW this year, which ran from March 27 to April 8, was the introduction of the inaugural Business of Fashion China Prize which was won by Caroline Hu, the New York-based Shenzhen native who has been highly praised for her creations. Renowned fashion magazine Vogue even commented that "her dresses belong at the Oscars".

Hu's win comprised of $100,000, a chance to showcase her works at London Fashion Week in September and a mentorship with companies such as Lane Crawford and Reebok.

"Caroline has only just debuted her first collection, but she's already won the inaugural Business of Fashion China Prize. This really signals the talent that Chinese designers have," says Yu.

But fashion is ultimately a business and not just an art form-great designs alone cannot guarantee one's success in the market. Many of the Chinese designers who have gained international recognition would point out that partnerships with industry players have been integral to their development, and one of the most fervent supporters of emerging local designers is Lane Crawford.

According to Joanna Gunn, chief brand officer for the Hong Kong-headquartered company, Lane Crawford has over the past 10 years groomed more than 20 Chinese designers and provided them with invaluable insights into the market. Some of the other Chinese design labels that Lane Crawford has supported include Ms Min, Helen Lee, Uma Wang and Ffixxed Studios.

"When we first started to help Ffixxed Studios, some of the things they wanted was more customer insight. As part of this partnership, we provided them with information such as the kind of fits, sizings and silhouettes that are in demand, as well as advice on pricing and clothing range. This helps them to understand from a broader perspective what customers are looking for," explains Gunn.

Some of the other organizations that have played a key role in nurturing emerging designers include Labelhood, which has been featured at SFW since 2016. This year, as part of SFW, Labelhood organized China Styling Bloggers, an event where more than 20 bloggers and influencers took to the runway to showcase the Fall/Winter 2019 collections of five local designers including Ming Ma, Yirantian, Sarayun and Samuel Gui Yang.

The BFC too has played a role in the rise of Chinese talent, providing many UK-based Chinese designers with support and the chance to be featured at London Fashion Week. Some of the most notable designers it has helped include Chen Xuzhi, who graduated from the prestigious Central Saint Martins in London, and Zhang Huishan, who cut his teeth at French luxury fashion house Christian Dior.

This support has raised awareness of the talent emerging out of the Chinese fashion scene. According to Gunn, many of Lane Crawford's customers, especially those from China, have expressed a desire in seeing more creations by emerging Chinese designers in their stores.

Another key factor in the development of emerging designers, says Gunn, is the support that comes from within the local fashion community.

"There is a real sense of community here in the Chinese fashion scene. The designers are incredibly supportive of each other. They even champion one another all the time. They would share studios to do their photo shoots and other resources. This is just not the case in Paris or other cities," says Gunn.

She notes that the sophisticated digital landscape in China has also helped with the development of emerging local brands.

"The dynamics have really shifted because of the unique digital infrastructure that is only seen in China. Being able to engage in B2C through WeChat has been transformational for brands. Designers can talk and react quickly to their customers," she says.

Alibaba's competitor JD and e-commerce platform VIP.com have also been crucial in the promotion of local talent. The two companies have partnerships with the BFC that help British brands navigate the Chinese market while enhancing the exposure Chinese designers have in the UK.

Rush points out that the robust supply chain in China is another factor behind the growing success of local designers. Though China was once viewed as the factory of the world that was lacking in creativity, the younger generation today has managed to turn the tables around by combining this manufacturing prowess with innovation.

"We hear many stories about how the next-generation of these factory-owning families are infusing creativity into their business. These are the people who are changing the perception of Made in China," says Rush.

One example is Lin Wei, the founder of Chinese brand PH5. Although her fashion company is based in New York, its creations are made in her mother's knitting factory in Dongguan, Guangdong province. Zhang Mijia, a Kering Award for Sustainable Fashion recipient who once worked for Nike and luxury fashion brand Christopher Kane, heads the company's creative endeavours.

The importance of identity

But although industry players expect to see more creations by Chinese designers appear on international fashion runways and in retail stores, Yu notes that there is still room for improvement.

One of the biggest challenges emerging designers face, he says, is the lack of a distinct identity that resonates with consumers and buyers.

"I look out for how they go about creating their designs. I'm very curious about their background, how and why they started their brands. All these elements should be reflected in their collection. They would also help us retailers tell their story," says Yu.

"But such designers are still a rarity. I think many brands often try to be someone else."

For designers to find their own identity, they need to shut out the noise in this highly digitized age where there is an information overload, concludes Yu.

"In this world we live in today, we are constantly bombarded by information on the internet and this sometimes compels brands to cater to trends in an effort to stay relevant," he says.

"But the fact is that you can only stay relevant when you be yourself."