CULTURE The dream of a Chongqing bangbang

The dream of a Chongqing bangbang 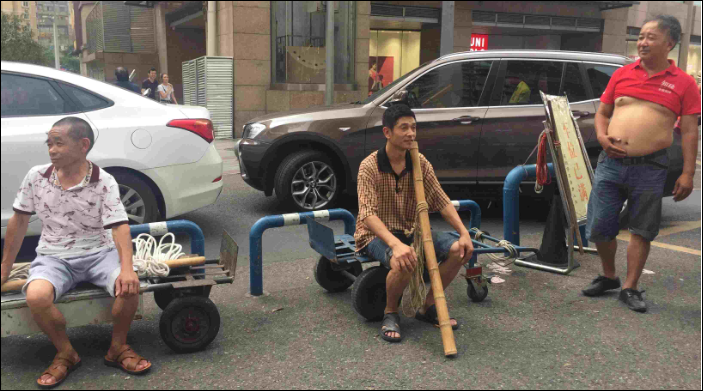 The glossy skyscrapers of hot and humid Chongqing in southwest China tell a modern story. Yet this bustling and mountainous city with a population of over 13 million is also known as a stronghold of one very traditional aspect of Chinese culture – the bangbang.

Bangbang is the name given to the manual laborers who still operate here today, helping deliver heavy loads without the aid of modern vehicles or technology. The term bangbang means "pole" in the local dialect and refers to the tool that these men (and a few women) used to transport packages.

While the profession has disappeared from most of China, Chongqing's winding and multi-tiered roads are cited by locals as the reason why the bangbang still works here. Big delivery trucks would struggle to go through this labyrinth.

Even so, bangbang numbers are shrinking. At their height in the 1990s, there were 200,000 to 300,000 bangbangs in Chongqing. But almost three decades later, there are only a couple of thousand left, doing this backbreaking work.

One of them is 49-year-old Zhou Zhaoping. He came to downtown Chongqing 10 years ago, with a dream of becoming an actor. Having given up a well-paid job in the hotel industry in the countryside, he soon found himself left with just 10 yuan in his pocket. He explained that he used the money to buy the very pole that is the source of his livelihood a decade later.

"Being a bangbang is like being a beggar. Who recognizes your value?" said Zhou, adding, "Some people think they can look down on me because they're rich, but they're wrong. A bangbang is just a normal person like you."

However, working as a bangbang doesn't allow Zhou make enough money to feed himself, and he has to find other ways to boost his income. One of them is doing odd jobs at construction sites, such as laying cables.

He shares a flat with five other people, where his room measures roughly 10 square meters. When Zhou is at home, this is the place where he dreams. He has always wanted to become an actor. Since he moved to Chongqing, he has landed some odd acting jobs portraying a bangbang on screen. However, the movie industry is fickle. He usually kept waiting all day just for a single scene, but in the meantime, losing potential income from other work. Despite the difficulties, he remains optimistic.

"I'm 49. I've been a bangbang for 10 years," he said. "If I don't make money at present, what will my future be? I want to live a good life. I won't be a bangbang forever, and I won't go back to the countryside. I'll move forward to my goal."