In about two weeks, Chongming Island resident Tang Jingda, 59, will prepare offerings for the Kitchen God, whose picture stuck on a board placed on his zaotou, or traditional Chinese cooking stove. 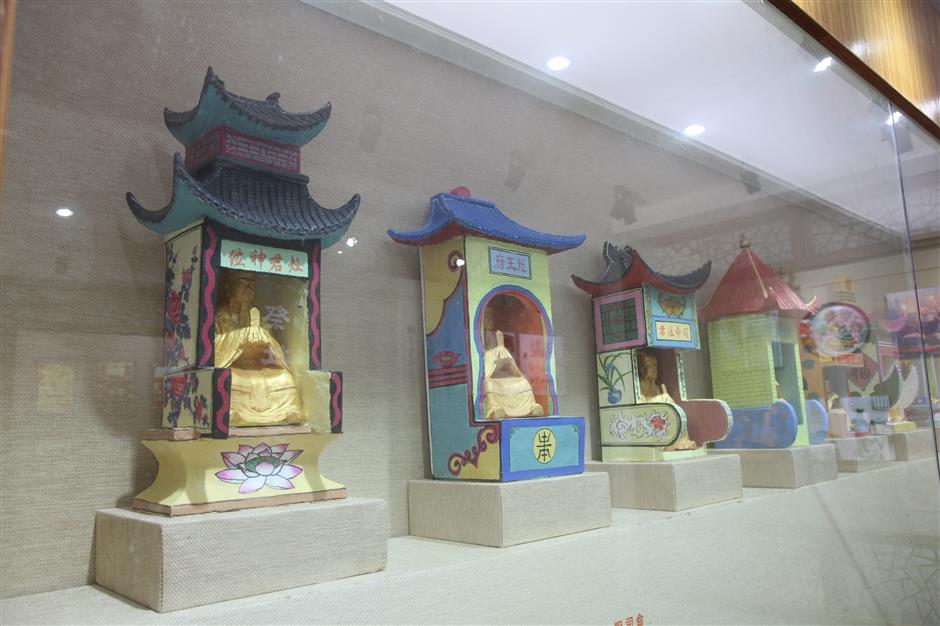 Shrines for the statue of the Kitchen God (Photos: Shine.cn)

According to Tang, former president of Shanghai Chongming Stove Culture Research Society, the Kitchen God returns to the heaven and gives an annual report on every household to the Jade Emperor on the 23rd or 24th day of the 12th lunar month. People burn pictures of the deity on that day, symbolizing his return to heaven.

Based on the Kitchen God’s report, the emperor either rewards or punishes families in the coming year. On Chinese New Year’s Eve, which falls on February 4 this year, people will place new pictures of the Kitchen God on their stoves to welcome him back from heaven.

“Those who can afford it build a shrine for the statue of the Kitchen God and place it on the stove,” said Tang.

In Chinese mythology, the Kitchen God is an important deity, who protects the hearth and family.

“With housing renovations since 2000, most families have abandoned the zaotou, which occupies a lot of kitchen space,” said Tang. “Some, however, still place a picture of the Kitchen God next to their gas stoves.”

Offerings to the Kitchen God are cakes, sweets and fruits. People hope the deity will have good things to say about them after eating sweet offerings.

It is said that some people spread sugar over the mouth of the Kitchen God’s picture to sweeten his report, while others touch up the photo with liquor, trying to make the god tipsy and cloud his memory of misdeeds.

“When my house was renovated, I told my children that I must keep the zaotou,” Tang said. “It is a tradition, and food cooked on the zaotou tastes better. Braised pork knuckle in brown sauce cooked in the traditional way, for example, is much more tender. And besides, traditional stoves accommodate larger woks.”

With a history going back more than 800 years, the zaotou was once a household essential on Chongming Island. 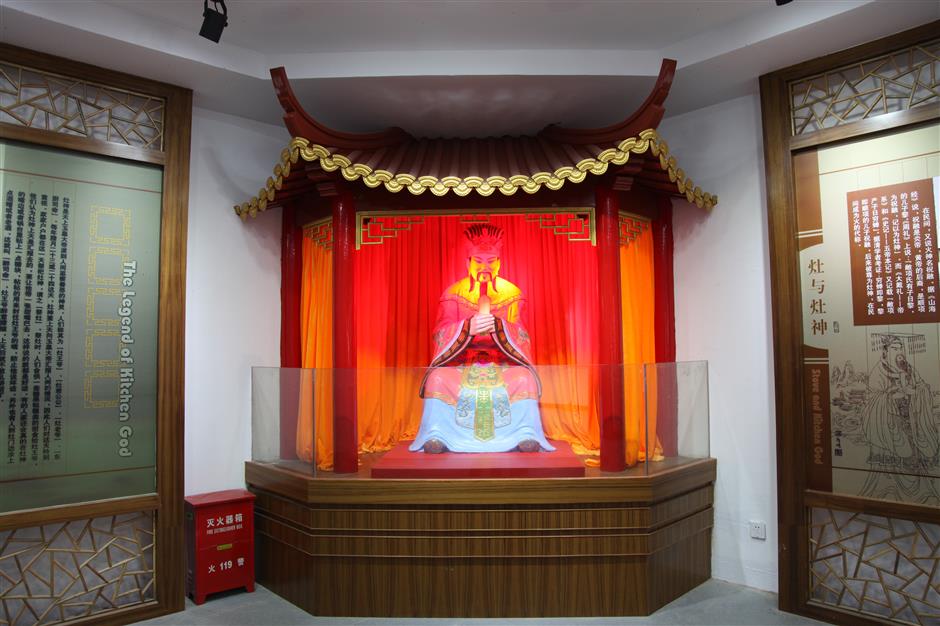 The Kitchen God is an important deity protecting the hearth and family.

“The zaotou of a single householder was small and simple, with only one burner,” said Huang Hansheng, 65, an “inheritor” of the traditional art of Chongming stove murals. “But it is rare now.”

Because of the smoke and ashes created by burning firewood and straw in the stove, clever locals erect a “wall” called zaoshan, or “stove mountain,” to separate the cooking area from the burning area.

The murals express the ideal life sought by locals.

“The plain-white zaotou without decoration is called tofu zao,” said Tang. “It is believed that tofu zao might offend the Kitchen God, so people draw paintings on it.”

Prior to the 1970s, the paintings were mainly black-and-white, drawing on pigments available at the time. Black pigment was made from pot ashes, rice wine and water. A green pigment was extracted from grass, while red pigment came primarily from bricks.

The brushes used in the paintings are called xiezhua, or “crab legs.” They are made of local materials such as bamboo roots, reeds and goat hair. 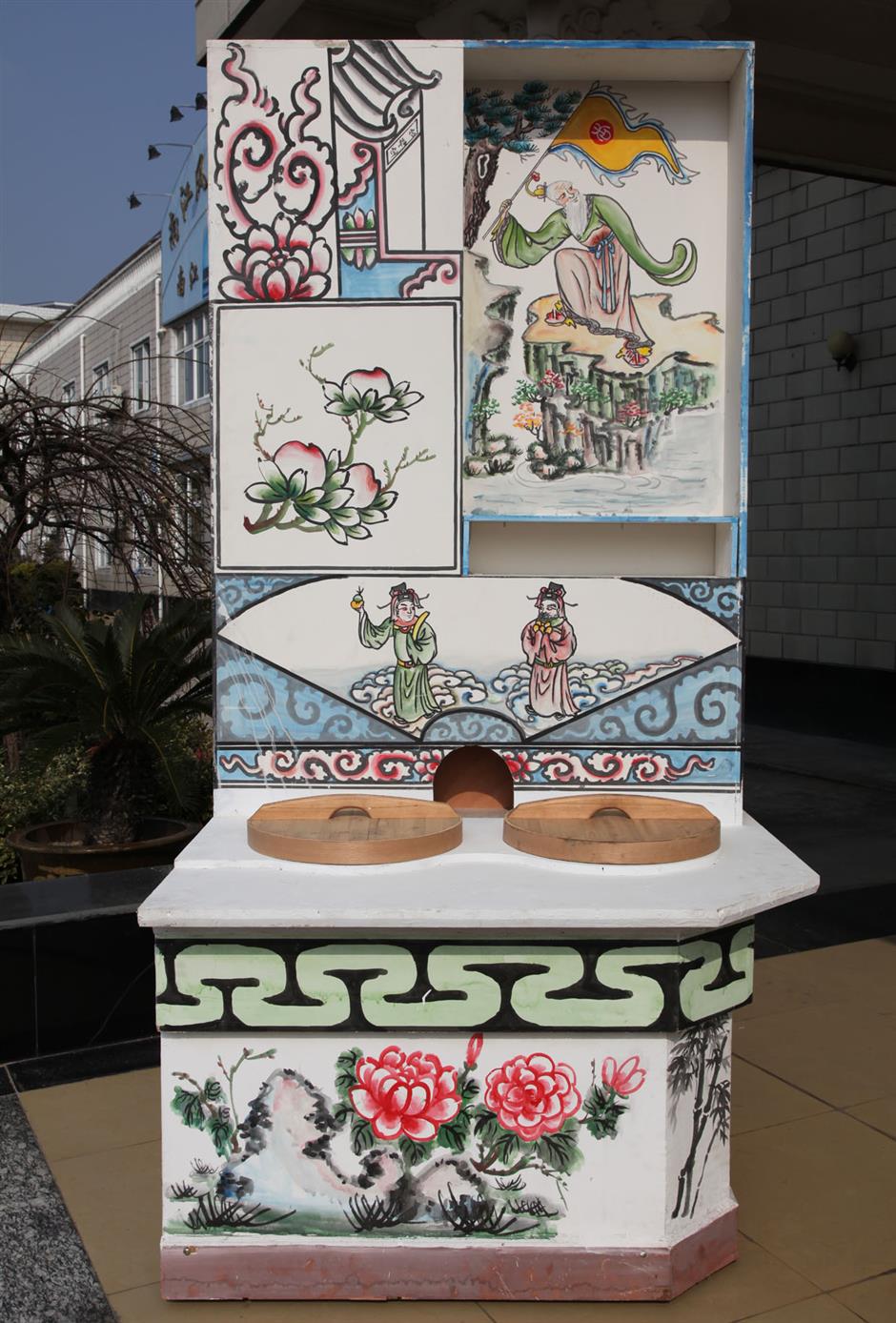 A stove decorated with auspicious patterns.

Stove murals, similar to frescoes, are executed on wet lime plaster. Therefore, artists need to complete a painting in one or two days. As the zaotou burns, the painting dries and doesn’t fade for several decades.

“In recent years, craftsmen have replaced natural pigments with watercolors,” said Tang. “Many people now prefer to install ceramic wall tiles on zaotou because they are easier to clean. However, older craftsmen find it hard to paint on tiles. I worry that may affect the future of the folk art.”

He admitted that his stove is more of a household decoration than a daily appliance.

“My wife and I seldom use the zaotou to cook food nowadays because the preparation work, like cutting and burning firewood, is too laborious,” he said.

Huang, who has been doing zaotou paintings for more than 40 years, said many restaurants themed on rural nostalgia often install “fake” zaotou, which use gas as a fuel source.

Although zaotou are not as popular as they once were, Huang is still very busy. People from downtown Shanghai, Suzhou and cities in Zhejiang Province often have zaotou in their homes, more as an artistic touch than a functional part of the household.

To preserve the culture of zaotou, a themed museum was established in 2012 in the town of Xianghua on Chongming Island. It displays the history and mythology of the stoves, along with the different types of stoves and traditional Chongming cuisine.

To attract more people to participate in the grassroots art, the Chongming Zaohua Art Festival is held every autumn. Huang also teaches local students the culture of Chongming zaotou in schools.