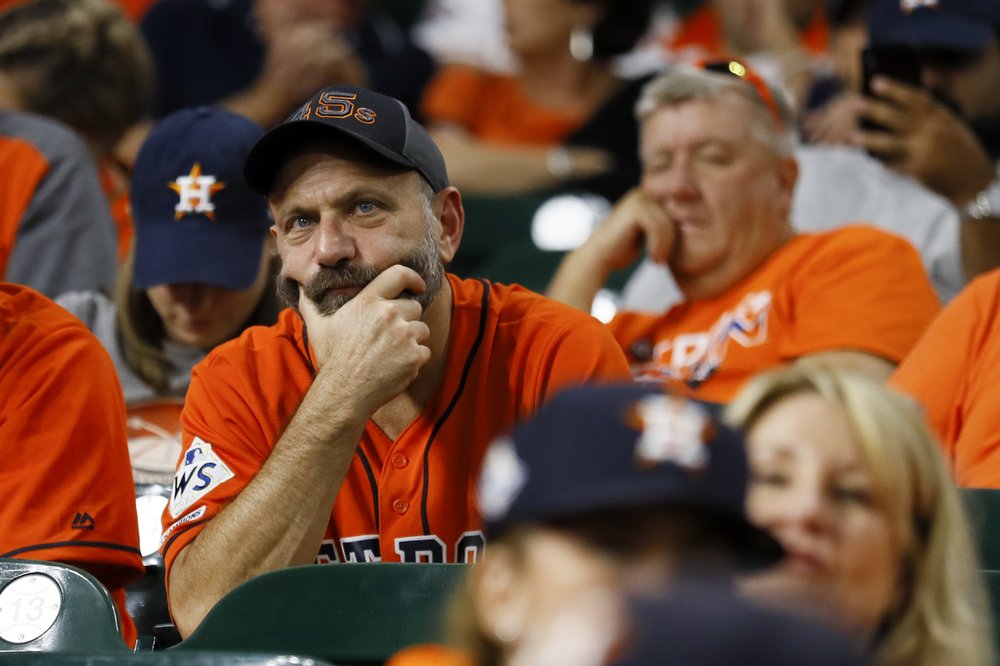 Fans watch during the eighth inning of Game 2 of the baseball World Series between the Houston Astros and the Washington Nationals Wednesday, Oct. 23, 2019, in Houston.(Photo: AP)

Snacking on chicken at a picnic table near section 402, decked out in his curly W cap and pullover, Bob Batwinis hoped to see a lot at Game 4 of the World Series.

And maybe, just maybe, on this evening at Nationals Park, the final out sometime before midnight.

“It’s an embarrassment that baseball has turned into a marathon that kids can’t watch,” the retired school teacher said Saturday.

Not just kids, either.

Baseball is a sport of stats, and here’s one that nobody enjoys seeing: So far, games in this Fall Classic are averaging 3 hours, 54 minutes.

“When you get to the World Series, every pitch and every decision is going to be more magnified. They’re more important now, so they’re going to take a little more time,” former manager Jim Leyland said as Houston took batting practice Saturday.

“But there’s no question about it, they’re dragging on a little too long,” he said.

There are reasons, sure.

The break between half-innings is now 2 minutes, 55 seconds, up from the 2:05 for most regular-season games.

Alex Bregman, Juan Soto and the hitters want more time outside the batter’s box to get steady. Josh James, Fernando Rodney and the relievers need an extra moment or two to compose themselves. Plus, those nonstop pitching changes.

Looming is the possibility of record-low television ratings as fans either tune away or nod off.

Even at Nationals Park and Minute Maid Park, there have been plenty of empty seats at the end.

In 2017, nine-inning World Series games between the Los Angeles Dodgers and Astros averaged 3:16. Last year, the matchups between the Boston Red Sox and LA took 3:30 (and didn’t include the 18-inning affair at Dodger Stadium that lasted 7:20).

On Friday night, the Astros beat Washington 4-1 in a pretty straightforward game. Yet it still took 4:03 and ended a few minutes past midnight.

“I know a lot of it has to do with TV, commercials and things of that nature. We’ve got a 3-minute in between,” Nationals manager Dave Martinez said. “So it is what it is.”

“Unfortunately, I said this before, I can’t drink caffeine anymore. But a couple cups of coffee would have done wonders for me during the game yesterday,” he said.

Martinez used to drink six cups of coffee a day before having a cardiac catheterization in September.

This season, Major League Baseball said the average time of a nine-inning game reached a record 3 hours, 5 minutes, 35 seconds. That exceeded the 3:05:11 in 2017.

Baseball tried a speedup at spring training, experimenting with a 20-second pitch clock. Nationals ace Max Scherzer was among many players who didn’t like it.

MLB is allowed to implement a pitch clock next season — the minor leagues already have them — but Commissioner Rob Manfred is reluctant to do that without support from all sides. Manfred plans to discuss the issue at an owners’ meeting next month.

Meanwhile, Game 4 slowed to a crawl in the late innings as the Astros pulled away for an 8-1 win.

Tough night for the Nats, and for the fans.

Joining him was Ed Shirley, a fellow former teacher also in his 70s. He grew up in Maryland rooting for the Washington Senators and flew from Florida this weekend to see his first World Series game in person.

Nowadays, Shirley likes to wake up early to play golf. Meaning not much sleep on World Series nights.

For the record, Trea Turner grounded out to end this game. The stadium clock showed 11:57 p.m.