CULTURE The story of Moyo the elephant

The story of Moyo the elephant 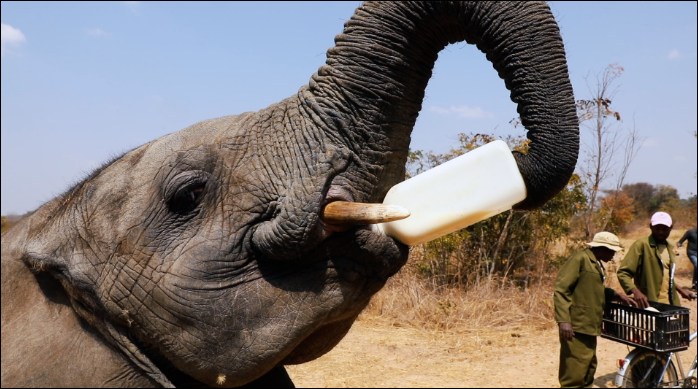 This is the story of Moyo, a rescued elephant in Zimbabwe. She lives in the Zimbabwe Elephant Nursery, set up by a local NGO called Wild Is Life in the country's capital of Harare.

"So Moyo is a very iconic little elephant. She is probably one of the smallest elephant cubs ever to be rescued. She came to us when she was about three to four days old. She weighed 56 kilos, and normally an African elephant cub weighs about 90 kilos. So she was very very small. I slept with her, I was with her 24 hours a day, and I think that's part of the reason why she managed to pull through," said Roxy Danckwerts, the founder of Wild Is Life.

Every year, hundreds of young elephants are orphaned across the African continent. These elephants rarely have a chance of survival in the wild and are more often than not, left to die. "We rescue babies, and we grow them, rehabilitate them and re-wild them. We are trying to create a culture where people care," said Danckwerts.

Today, Moyo is healthy, playful, and has become some kind of ambassador to the nursery. "She's a real little princess. But she's the most wonderful animal. She is gentle, calm, very very nurturing to the other elephants that come into the nursery. She is also very good with people," said Danckwerts.

Moyo and the other orphaned elephants here have formed an unlikely family. "You'll see that all of them are trying to find their place. Moyo is about four and a half years old now. She's having to take on a lot of responsibility for such a young animal... almost becoming a matriarch at the very young age." said Forbes, Danckwerts' son.

He added, "When you see the elephants walking, Moyo is at the front, Kora's at the back and the two young ones are at the middle. I think that's what makes this herd very special. We as humans are also beginning to learn so much about how important family dynamics are."

But unfortunately, they're not much more than objects of money in the eyes of ivory dealers. Zimbabwe has a serious poaching problem. Some regions are losing as much as 75 percent of the elephant population over the past 10 years. Danckwerts believes China's decision to ban ivory sales by 2018 could become a major turning point. "So this is the story of Wild Is Life. These pictures show when the Chinese president, President Xi and his wife Madam Peng came to visit Wild Is Life. The president just loved animals, and he just had this wonderful smile on his face. He was really excited to meet Moyo. He was really concerned about the ivory problem. Banning the domestic ivory trade in China was a huge step for the world that China is making this move," said Danckwerts.

The nursery is developing a protected area where their big elephants can be trained to reintegrate back into the wild. That's where Moyo will hopefully end up one day. To all the people at the nursery, it will be an emotional and difficult send-off.

"But we will cross that bridge when we come to it," said Danckwerts.