CULTURE The temple that founded a city on the high plateau

The temple that founded a city on the high plateau

Dazhao Temple, which literally means “big temple” in the Tibetan language, is not only big but also blessed since its birth.

The temple, built under the reign of Alatan Khan, a grandson of Genghis Khan, was the first structure of what was to become the city of Hohhot, today’s capital of the Inner Mongolia Autonomous Region. 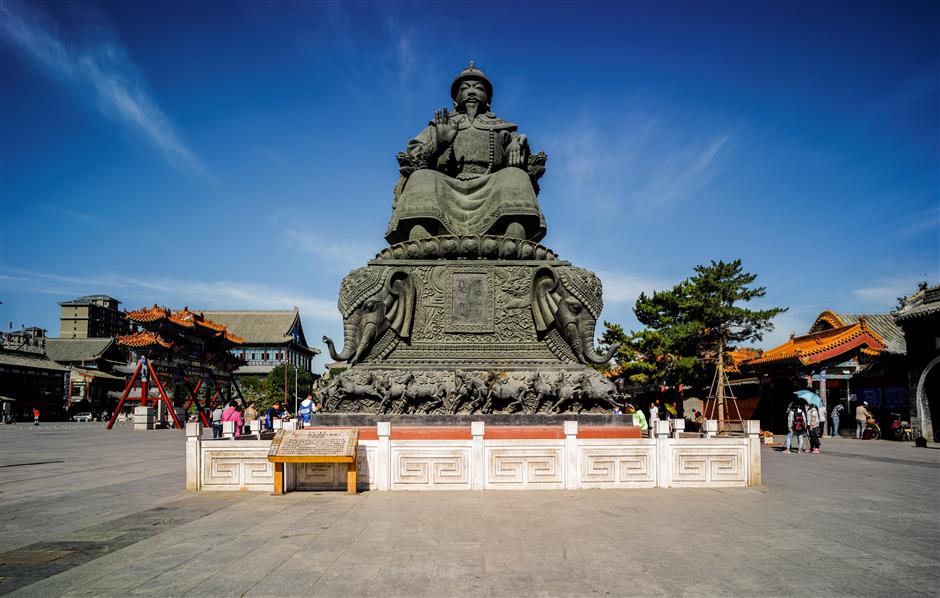 A statue of Alatan Khan, a grandson of Genghis Khan, sits in temple courtyard.

Its dominant feature is a 3-meter-high silver statue of the Tibetan Buddhist god Sakyamuni, erected to protect the people of the region. 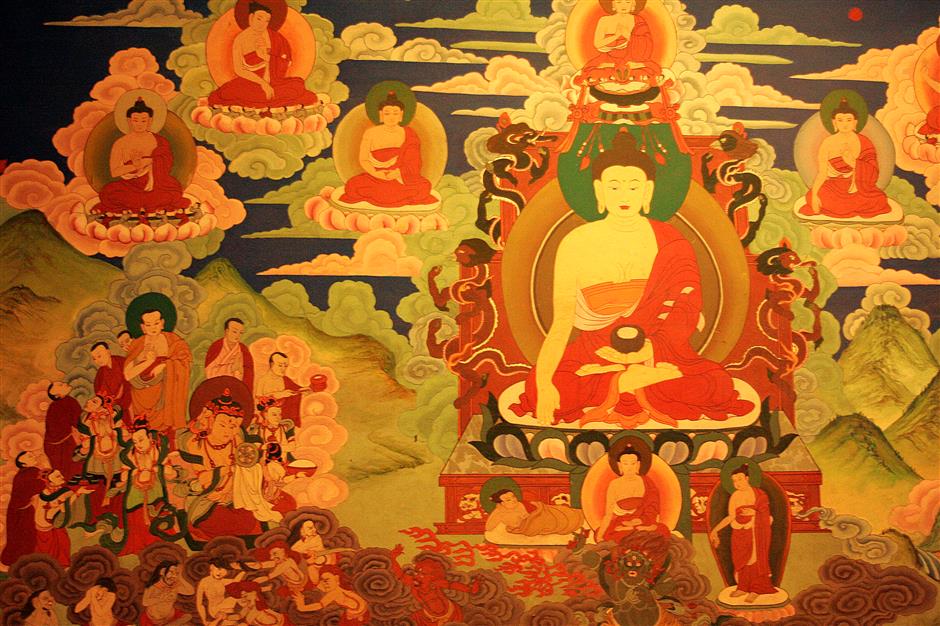 Colorful frescoes, which reflect Tibetan influence, have been well preserved in the temple.

The temple was completed in 1580 during the Ming Dynasty (1368-1644). The site became the center of religious pilgrimages after the statue was blessed by Sonam Gyatso (1543-88), who traveled from Tibet for the consecration in 1586. His blessing is said to have protected Dazhao Temple from the ravages of wars. Often called the Silver Buddha Temple by local residents, the temple still exerts great influence in the region. 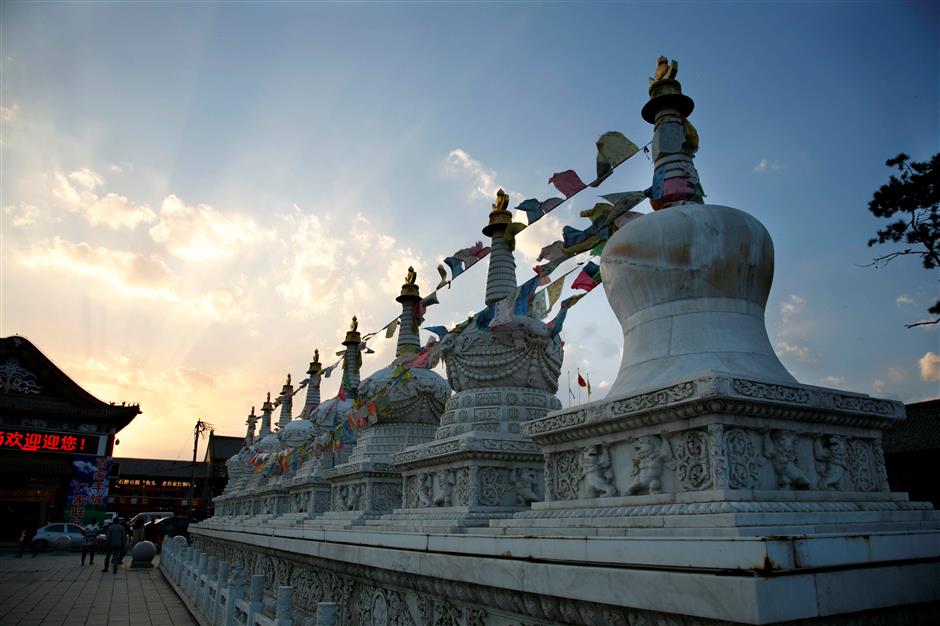 The White Pagoda in Dazhao Temple

According to legend, Huangtaiji, son of the Qing Dynasty (1644-1911) founder Nurhaci, chased Ligdan Khan, a king of the Mongolia Empire, to Hohhot and ordered the city be set on fire. Yet he spared the Silver Buddha Temple and later oversaw repairs and an expansion of it. The temple was renamed Wuliang, which means “infinite,” with a nameplate in Manchu, Han and Mongolian languages.

The Great Buddha’s Hall of the temple was spared during the turbulent “cultural revolution” (1966-76) because it was used as a warehouse of a clothing factory at the time and was guarded by soldiers. Precious relics like Buddha statues, frescoes, sculptures, paintings and Buddhist scriptures were preserved.

The Dazhao Temple complex covers an area the size of nearly six football fields. The architecture is a combination of Tibetan and Han features. Chinese cornices, animal figures on roof ridges and eave tiles reflect the Han style, while rows of prayer wheels and colorful frescoes come from Tibetan influence. The yellow-glazed roof tiles mark the site as an imperial temple of the Qing Dynasty.

The temple is somewhat of a melting pot of religions. Apart from Tibetan Buddhism, visitors are often surprised to find elements of Zen Buddhism and even Guan Gong, a historical figure worshiped in Taoism as a symbol of loyalty.

The principal architectural structures of the temple are the main gate, the Heavenly King Palace, the Bodhi Palace, the Sutra Hall and the Great Buddha Hall.

The “three wonders” are the silver Sakyamuni statue covered by gold leaf, two paper-and-clay dragon sculptures and jewel-paint frescoes. The two 10-meter-high coiled dragons were made of paper pulp and clay. They survived for more than 400 years without so much as a crack. The frescoes were done in paint using gold, coral, turquoise and lazurite. Most of the colors have retained their luster today.

Other treasures include a royal umbrella made of peacock feathers, and eight palace lanterns carved from rosewood and decorated with pearls and jewels. Both were legacies of Qing Dynasty Emperor Kangxi’s frequent visits to the site.

Actually, there are several legends associated with these imperial visits to the temple. One goes that Emperor Kangxi was passing by the temple on his return from quelling a rebellion in Zungar. Suffering thirst, he wished for some water to appear. Suddenly, his horse stamped its hooves on the ground until water flowed out. The emperor tasted the water and called it the best spring water of the region. The spring was later turned into nine wells that still sit to the north of the temple. The site is called Yu Quan Jing, or the “emperor’s spring well.”

Another story relates to a visit when Emperor Kangxi was wearing plain clothing to observe daily life unobtrusively. The emperor stayed in Dazhao Temple, but casually went to dine alone at a local restaurant.

The restaurant owner, a local tyrant, presented the emperor with an exorbitant bill. The emperor suggested the owner accompany him back to the temple for the money, but the owner refused and threatened to take his clothing and horse as payment. A kindly waiter named Liu San stepped in and paid the emperor’s bill, costing him a year’s salary.

Returning to Beijing, Emperor Kangxi ordered severe punishment for the restaurant owner and offered Liu a high-ranking job in the capital. Liu, knowing that he was not qualified for the post, declined. The emperor then granted Liu the salary of a high official without his having to take the job.

An artist in the Qing Dynasty turned the story into a cloth painting with peacock feathers and horsehair. About 110 figures appear in the vivid painting.

The original is now kept at the Inner Mongolian Temple for Preservation, while a copy is on exhibit in Dazhao Temple to help visitors understand the story.

How to get there: It takes nearly three hours by air from Shanghai to Hohhot. If you prefer rail, a direct train takes at least 24 hours. To shorten the time, you can first go to Beijing by a high-speed train, which takes about six hours, and then either transfer to a standard train to Hohhot for nine hours, or take a one-hour flight. Once in the city, take bus No. 38 to the Dazhao stop and then walk about 5 minutes to the site.