CULTURE The world through his eyes

The world through his eyes 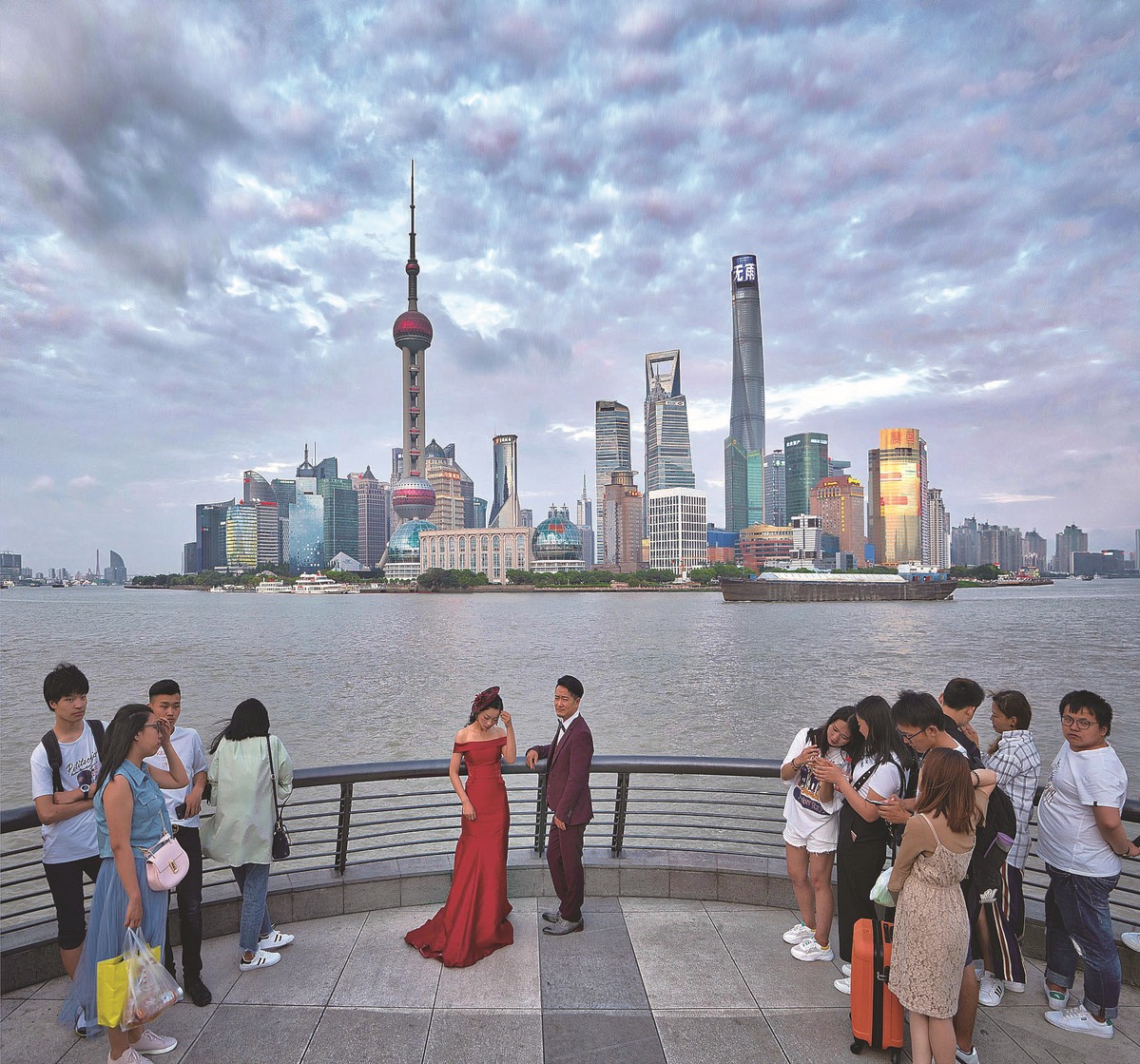 A young couple has their wedding photo taken at the Bund in Shanghai. (Photo: China Daily)

Famous photographer Trey Ratcliff might have a visual impairment, but he says this shortcoming has been more of a boon than impediment to his creative pursuits

Twelve years after he first learned photography, Trey Ratcliff is today one of the most influential travel photographers in the world. The former programming engineer, who is blind in one eye, commands a massive following of 16.8 million followers on Instagram while his blog, Stuck In Customs, is viewed about 170,000 times daily.

Currently based in Queenstown, New Zealand, the Texas native runs a million-dollar business by selling his artworks as exclusive prints which cost between $50,000 and $100,000 each.

Besides his unique post-processing techniques, Ratcliff is also known for his generosity when it comes to sharing for free how he edits his photos. The American is the developer of Aurora HDR, the winner of the Best Mac App in 2017.

In June, Ratcliff was in China as part of a world tour in partnership with luxury hotel Ritz- Carlton. During his stop in Shanghai, he shared his views on photography, editing, and his thoughts about China where he shot some of his most popular photos.

Among the four Chinese cities (Beijing, Tianjin, Chengdu and Shanghai) you have visited, which one impressed you the most?

Photographically, Shanghai is my favorite. I really like all the buildings, and I also take lots of street photos of people. The people here are interesting, with crazy outfits and doing crazy things. I think when you are a photographer, you see things differently, like a vulture instead of a tourist.

Why do you say that being blind in one eye is a gift? 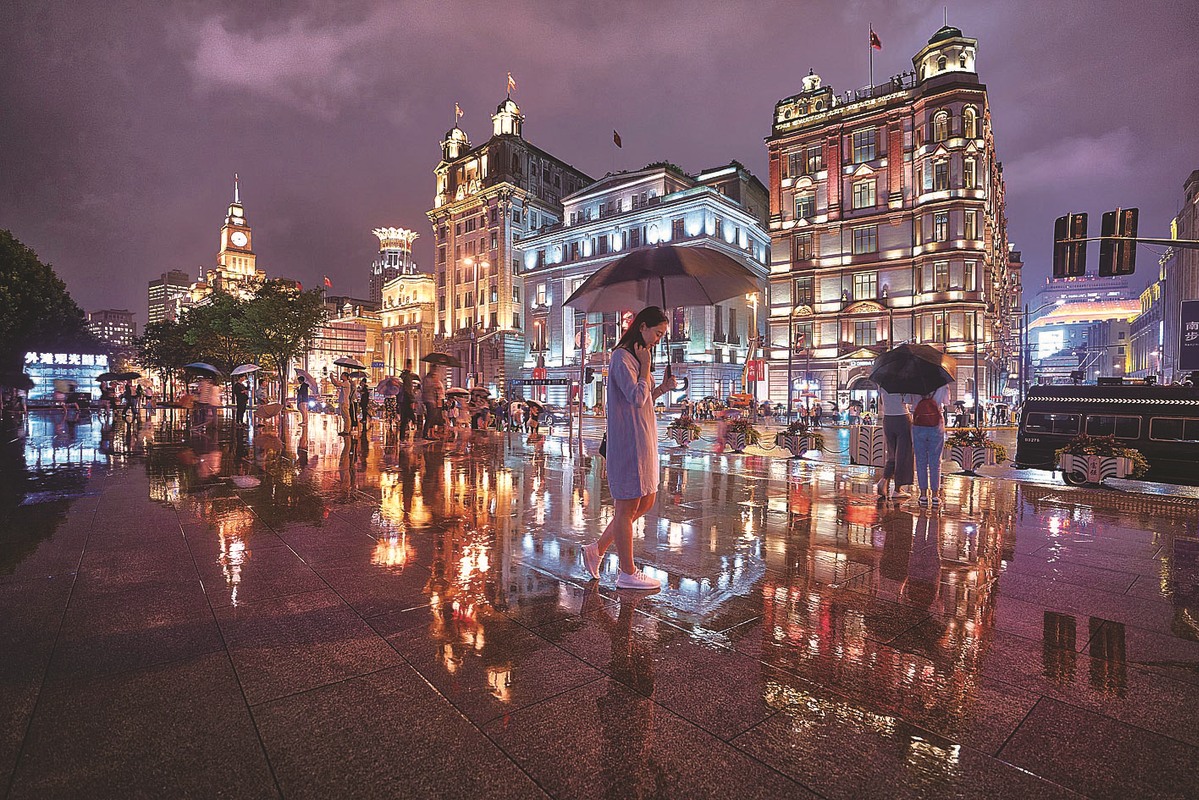 A night view of the Bund in Shanghai. [Photo by Trey Ratcliff / for China Daily]

How do you decide which photo to post on your blog and social media platforms?

I don't do lots of things that are generally considered popular. I don't take food photos or selfies. I don't care if I don't get enough likes or comments. I have my own definition of interesting photos. It turns out that lots of people like my photos. I am glad they like them, but that's not the reason I do it. I mostly do it for myself. And I find that if I am being pure and true to myself, other people can feel it. That may be one way to stand out in social media. There is an element of truth in there.

What's your definition of an interesting photo?

I think there are two reasons people take photos. The first is about showing off so that people might think they are cool and living a great life. I personally don't think that's a good reason to take photos.

I firmly believe that if you produce high-quality and unique content, and have a little bit of a voice, people will be drawn to your work. It's not about what is popular out there, but what you think is interesting.

You are famous for heavily editing your works, something that is controversial in the industry. What is your opinion about this?

I have mixed feelings about it. There should never be over-processing for areas such as journalism. As for fashion and beauty, too much processing might depress people. It gives the impression that you have to be beautiful to be valuable.

But if you are making art, "photoshopping" your images is acceptable because it's just one of your tools. It's a creative process. There is a saying that the use of artifice in your craft is noble. 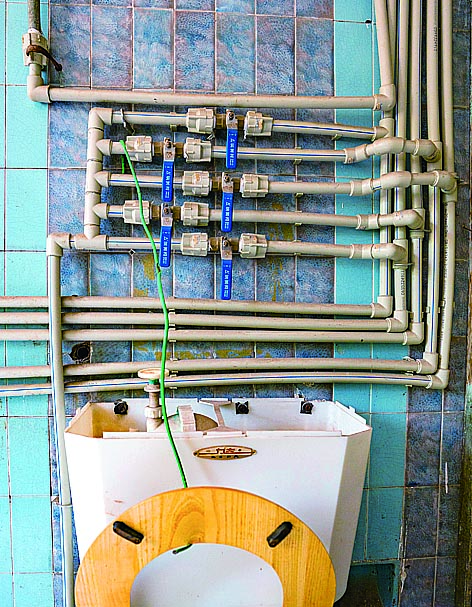 Water pipes belonging to different families are pictured above a toilet bowl. In old houses where there are communal toilets, residents are expected to flush using water that flows through their designated pipes. [Photo by Trey Ratcliff / for China Daily]

Does it ever worry you that people might be disappointed when they realize the difference between your works and reality?

What I show is the potential in places, such as when the weather is good or when light is ideal. I think that's what real art does — it brings out the potential of places or people.

Was switching professions at 35 years old to become a fulltime photographer a difficult decision to make?

I can see how it's a hard decision for many people. But not for me. I am the type of person who gets comfortable with being uncomfortable.

I didn't hate my life as a programmer. I made good money, had some decent friends, but there was always a little throb at the back of my head warning me that I was meant to do something greater in my life, though I didn't know what exactly.

I have always enjoyed creative stuff but I had never taken a photo. So I gave it a thought and bought an expensive camera while traveling in Kuala Lumpur. The photo was terrible, the worst photo ever. It made me wonder how a sunset can be so beautiful in real life and so ugly on my camera.

Then I put on my computer science hat, thinking of the photo as a bowl of data that I can manipulate. Then I sought to determine the differences between the camera sensor and the human retina.

I think I am a very romantic person, so I want my photos to look like this rich cinematic universe as well. I am still figuring it out. But that is my incentive — to make the photo as beautiful as my imagination of the world.

How did the partnership with Ritz-Carlton differ from your other globe-trotting experiences?

I am happy sleeping under a tree in a park. But the great thing about staying at the Ritz-Carlton is the people working here. They are so nice that it's like they wake up and take a happy pill. That's something I would like to have, cause I always want to make people happy.

I don't take myself seriously at all. I have no ego, which is the greatest creative gift that anyone can give to themselves. When you stop taking yourself seriously or worrying about what everyone else is thinking about you, you have a quietness in your mind that levels out to a natural, happy state.

What's the next plan in your photography career?

I am opening a series of art galleries around the world, in Queenstown and probably in Shanghai. In a world where everything is digital, people may appreciate something that is real and rare.