Theme parks, several research houses aver, is the next big chapter in China's ongoing consumption upgrade saga, after the surge in outbound tourism flights and a spike in cinema screens. 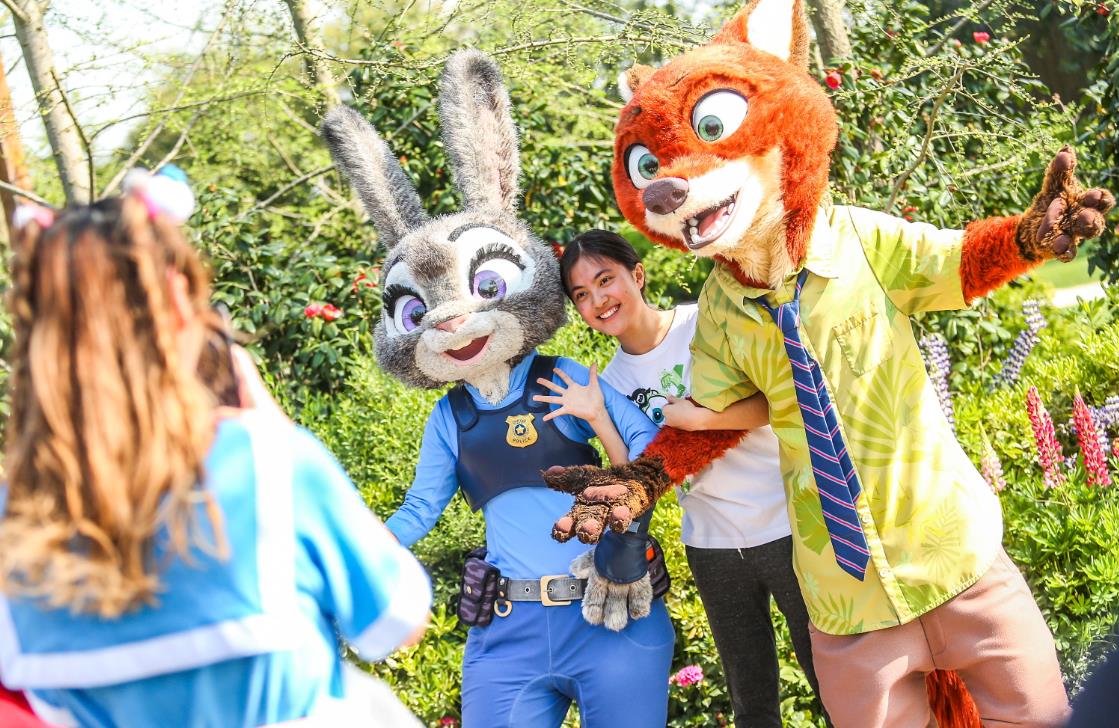 A visitor poses for a picture with Zootopia avatars Judy and Nick at the Shanghai Disneyland. (Photo: China Daily)

The Themed Entertainment Association, a tourism and entertainment trade group, projects China to be home to the world's largest theme park facilities by 2020.

A report from World Travel Market last year predicted that theme park-related retail sales are projected to hit $12 billion by 2020, up 367 percent compared to 2010.

That translates to 330 million people visiting one theme park or another by 2020 in the world's second-largest economy.

Consultancies attributed such optimistic growth projections to an expanding middle-income group that has the capacity and willingness for discretionary spending. People want to pamper themselves through a variety of entertainment, they said.

So, leisure attractions in China are becoming increasingly popular as disposable incomes in the country grow. ANZ Bank believes China's middle-and upper-middle-income earners will take up half of GDP consumption by 2030. Some 326 million people are projected to join this group in the next 15 years or so.

Theme parks' development in China has seen three phases so far. After the baby steps of the 1991-2000 period, Chinese leisure companies increased scale until 2015.Then on, the industry marched into what real estate consultancy Colliers calls the "third era" of mega projects, international brands, intellectual property or IP rights, and Chinese finance.

The Shanghai Disney Resort, which opened in June 2016, exemplifies the trend in China. It offers a suite of massive retail, hotels, and a park complex. The park is backed by US entertainment giant Walt Disney. It has managed to achieve break-even in its very first year of operations, a milestone achieved only by its recently-built facilities.

"This growth has followed the increased popularity of Western brands and culture in China, as well as a growing interest from Chinese audiences in globally recognized content," said He Jianmin, a professor of tourism management at the Shanghai University of Finance and Economics.

The entertainment giant is tipped to dominate the country's $204 billion media and entertainment industry, according to professional services provider PwC.

The TEA report identified three Chinese theme park operators: OCT Parks China, Fantawild and Chimelong Group. They have all made it to the top 10 list, in terms of number of visitors last year.

Besides, Beijing is slated to open the world's largest Universal Studios in 2020. Hong Kong-listed Shimao Group has also entered the fray by promising to build eight outdoor and water theme parks by the end of this year.

The Chongqing Riverside-Six Flags Theme Town, the first international theme park owned by Chinese, is on course to debut in Southwest China.

Among the projects in that deal was Nanchang Wanda City, which the company opened last year. Before the deal, Wanda's chairman Wang Jianlin had talked it up as a competitor to Shanghai Disneyland.

Existing players, no matter new or established, will still have plenty of new competitors: some 59 theme parks are currently in the pipeline in China, according to a report by consultancy Euromonitor.

Industry players largely view such competition as more of a blue sea. Lionsgate, whose popular film franchises include Hunger Games and Twilight, will be brought to life when the studio opens what it calls the world's first vertical theme park in China's southern city of Zhuhai, Guangdong province, later this year.

The studio hopes to leverage Zhuhai's emerging status as a tourist destination and its proximity to Macao, which is considered the "Las Vegas of China".

According to Jenefer Brown, the company's senior vice-president of global live and location-based entertainment divisions, the Chimelong Ocean Kingdom theme park in Zhuhai has already drawn tens of millions of people, and that could be a plus, or a complementary.

Wintastar Shanghai, an indoor skiing and entertainment facility in the pipeline, also sees competition as an invaluable asset to create industry synergy.

"It is likely to generate combined effects and create the Orlando-Los Angeles version of China," said Ong Chih Ching, executive chairman and executive director of KOP, which oversees the park's operations, branding and international partnerships.

"For this project, we are not aiming at just Shanghai but at a global stage," said Ong. "It is complementary to Disneyland as the latter has consolidated its position with around 15 million footfalls per annum. We can only take 3.2 million visitors on a stabilized basis because it's indoors."

Popular IP rights such as characters of protagonists from the original storylines of movies and shows, have become the central plank.

"What differentiates our theme parks from the others is that we will incorporate advanced technologies, family-oriented concepts and, most importantly, many famous comic characters," said Vincent Montagne, chairman of European multimedia and publishing group Media-Participations, which is elbowing its way into China's theme park market.

By joining hands with Shanghai's Dragon Deity Capital, the company looks to build five or six Dragon Deity International Village projects in China over the next five years, with the first such facility in Shanghai.

According to Brown, the China entry is part of the push to expand their international influence where their indigenous IP elements are popular.

"We created experiences that are immersive, that tell stories and are organic to the brands," she told the Associated Press. "It's a mix of all the cutting-edge attractions that you'll find in entertainment right now."

Shimao Group and International Merchandising Promotions and Services SA will bring in first Smurfs-themed park in the Asia-Pacific region. It will be located within the Shanghai Sheshan National Tourist Resort.

International Merchandising Promotions and Services is the official licensor of the Smurfs, a series of comic characters created and introduced by Belgian comics artist Peyo, also known as Pierre Culliford.

"We hope theme parks can be not only 'un faiseur de plaisantristes' (a joke maker) but the best companies during the growth of children, thanks to the wealth of characters," said Peng Yueqi, vice-president of Shimao Commercial and Themed Entertainment.

Industry observers said the sustainability of a theme park relies largely on an attractive theme and storyline. Else, they can be classified as mere amusement parks.

"It's not that you display a dinosaur or an Ultraman model there and then you can call it a theme park," said Dai Bin, head of the China Tourism Academy. "Instead, it's a place people go to in pursuit of some kind of emotion or value. Theme parks are like live spaces where visitors can interact with them."

Although many Chinese theme park developers and operators are major real-estate developers with strong financial capability and more knowledgeable about the local market, their major weakness is the lack of well-known IP, said Timothy Chen, director of advisory services at Colliers International for East China.

"They need to be more innovative and creative to construct more themes based on the knowledge of the local culture and art to differentiate their projects from their competitors," he said.