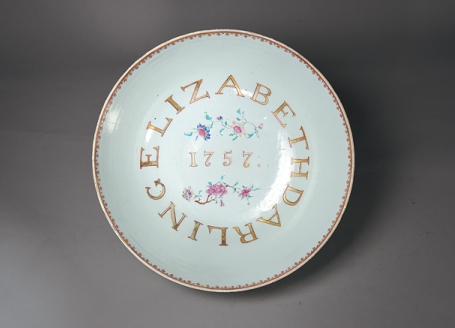 In 2006, some 260 years after a wooden ship, the Goteborg, laden with Chinese goods, sank on the return trip to Sweden from Guangzhou, Guangdong province, a rebuilt vessel repeated the journey to the longtime trading hub in South China.

Salvage work began in the 1980s after the shipwreck was found not far from its home in Goteborg (also known as Gothenburg), Sweden. Four-hundred pieces of porcelain and nine tons of porcelain fragments that had gone down with the Goteborg were recovered after 10 years of effort.

"The porcelain is truly a reflection of the prosperous trade between Guangzhou and the rest of the world during the Qing Dynasty (1644-1911)," said Ge Hua, director of the Thirteen Hongs Cultural Promotion Association.

The Goteborg visited Guangzhou three times from 1739 to 1745. Unfortunately, on its final voyage it struck a coral reef and sank on its way home.

A replica of the Goteborg is now on display in the Thirteen Hongs Museum in Guangzhou, which shows examples of the prosperous trade between China and the West, including Chinese antiques.

"The Thirteen Hongs in Guangzhou was once the gate through which China connected with the world, as well as the window through which the world got to know China. It is the cultural and historical calling card renowned both abroad and at home," Ge said.

The word hongs, in Cantonese, refers to merchant houses or trade houses, similar to companies. The number 13 is an appellation, or a generic term, not the actual number of merchant houses.

Thirteen Hongs, also refers to the location of the trade houses, the hong merchants and the system in use. From 1757 to 1842, Guangzhou was the sole Chinese port that handled trade with the West, becoming a frontier of political, economic and cultural communication, Ge said.

In 1757, the Emperor Qianlong, cautious about political and commercial threats from abroad, ordered that Western merchant ships could only anchor and trade in Guangzhou.

While Guangzhou was far away from Beijing, the capital, and had always been a trading port, the Qing government thought it was good idea to confine trade to the southern Chinese city.

Guangzhou played an important role on the ancient Maritime Silk Road, establishing trade relationships with some of the world's great port cities starting in the Han Dynasty (206 BC-AD 220).

"As Guangzhou represented the direct connection of China and the West during the time the oneport policy was in effect, the Thirteen Hongs Museum is a perfect place to display how the trade policy of the Qing Dynasty operated and how Guangzhou trade prospered during that time," said Wang Yuanlin, a professor at Jinan University in Guangzhou and director of the Guangdong Pearl River Delta Culture Research Association.

The Thirteen Hongs Museum, with an area of 4,700 square meters, was created in 2016. It is located on the original site of the old trading zone of the Qing Dynasty (now Guangzhou Cultural Park).

"Although the Thirteen Hongs had already ceased its historical role, its spirit of credibility, practicality, adventure and tolerance are still carried on by Cantonese businesses," Wang said.

The museum is thematic, with two permanent exhibitions-and exhibition of Guangzhou's Thirteen Hongs during the Qing Dynasty and a display of donated artifacts from Wang Heng and his wife, Feng Jie.

The first exhibition hall covers 2,450 square meters and has six parts. It systematically shows the history and prosperity of the Thirteen Hongs, including foreign trade, Hong merchants and other historical landmark trade events.

"The exhibition encourages Cantonese businesspeople to keep on moving to compose a new chapter for the 21st Century Maritime Silk Road," Wang said.

On the second floor of the museum, the display of donations from Wang Heng and his wife-well-known Cantonese collectors and entrepreneurs-including many precious cultural relics.

In 2013, the couple donated more than 1,500 antiques that they had purchased abroad. The museum was under construction.

"The splendid history of the Thirteen Hongs is shown by a vast quantity of precious historical documents and the cultural relics from abroad and at home," Wang Heng said.

"They were the main handicrafts made in Guangzhou for export during the Qing Dynasty," Wang said. "Tea, silk, porcelain and other exquisite handicrafts exported through the Thirteen Hongs were very popular in Europe and the United States."

Among the antiques are more than 100 pieces of mahogany furniture of a kind rarely seen in China, and more than 600 Guangcai porcelain pieces made during the Kangxi and Qianlong period, which comprehensively provide visitors with concrete examples for study.

Also, there are pith paintings of various themes-a lost craft that illustrates the prosperity and vibrancy of Guangzhou's business and trade during the Qing Dynasty.

"We hope this exhibition will become a platform for the study of the history of the Thirteen Hongs, and influence more people to make donations," Wang said.