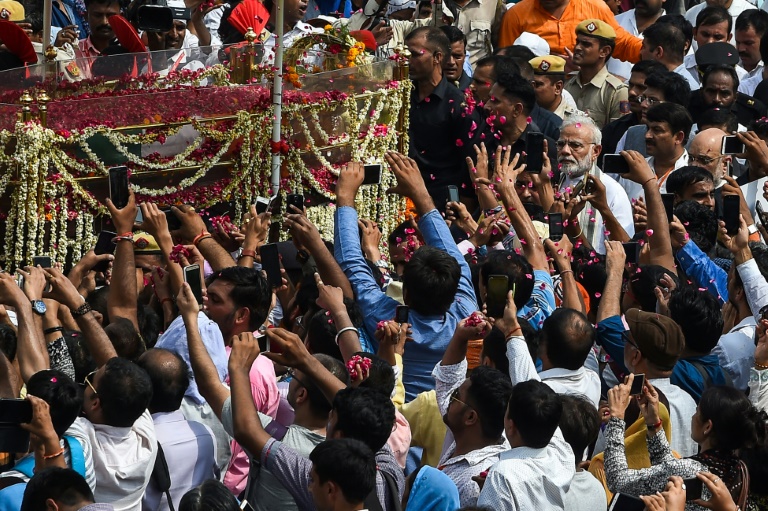 Thousands of mourners in white funereal dress escorted the coffin of three-time prime minister Atal Bihari Vajpayee through the Indian capital on Friday, showering his body in rose petals before his cremation.

Vajpayee, a poet and spellbinding orator respected across the political divide in India, died Thursday after a long period of declining health. He was 93.

Prime Minister Narendra Modi, who described Vajpayee's passing as "a personal and irreplaceable loss", lead the procession through Delhi to the leafy cremation grounds near the sacred Yamuna River.

He was placed on a sandalwood pyre set alight by his foster daughter, as family poured sacred grains on the burning logs and incantations were recited by Hindu priests.

Mourners had lined the streets for hours to catch a glimpse as Vajpayee's coffin, wrapped in the Indian tricolour flag, made its final sombre journey.

Despite not making a public appearance in years, Vajpayee continued to inspire devotion in many parts of the country, especially in key bellwether Hindu-heartland states in north and central India.

"He was a Hindu by heart, but a leader of all by his deeds," said Kumar Krishnen, a mourner on a Delhi streetside.

"It was India's poor who lived in his heart and who he worked for," said another, Rajkumar Tripathi, who also turned out to farewell Vajpayee.

"He was a poet and a writer, but all his literature was based on the common man and his aspirations. I salute this immense personality with all my heart."

Vajpayee was seen as a more moderate face of Hindu nationalism during his time in office, although he struggled to hold back the more hardline members of the BJP who went on to run the party and the current government.

His often conciliatory tone, and poetic jibes directed at opponents, won admiration on both sides of the political divide.

In the financial capital Mumbai, the main opposition Congress Party hung large posters from buildings bearing Vajpayee's commanding profile and a message of tribute to the late leader.

He was the first non-Congress leader since India's independence in 1947 to complete an entire term in office as head of a BJP-led ruling alliance between March 1998 and May 2004.

Congress leader Rahul Gandhi, who sat alongside former prime minister Manmohan Singh at Vajpayee's cremation, had described the late leader as a "great son" of India.

A former journalist and poet-turned-politician, Vajpayee was one of the few opposition lawmakers inside parliament when India's first prime minister, Jawaharlal Nehru, still held office.

His more than five-decade-long career peaked in the 1990s, when his masterful oratory attracted tens of thousands of people to his rallies across the country.