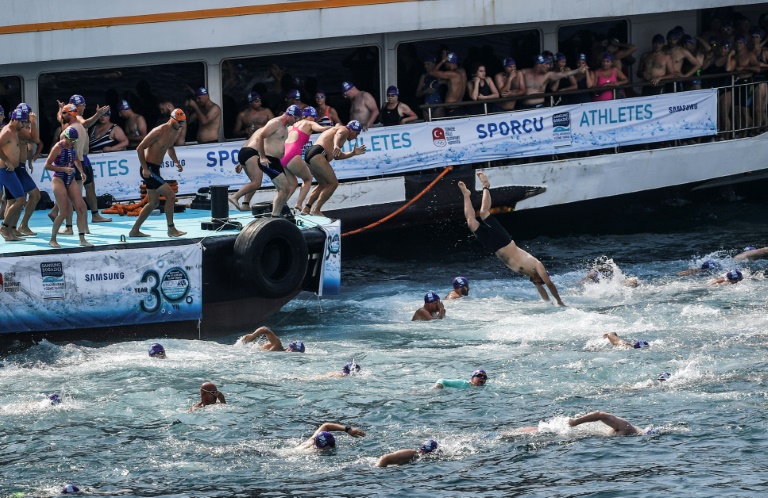 Thousands of people, some serious racers but others plucky amateurs, swam from Asia to Europe across the Bosphorus Strait in Istanbul on Sunday in Turkey's most iconic swimming race.

About 2,400 swimmers took part in the Samsung Bosphorus Cross-Continental Swim, organised by the Turkish Olympic Committee, for the 30th race since the tradition began in 1989.

The event is hugely popular, with only a limited quota for international swimmers, who snatched up all their available places in less than half an hour after registration opened, organisers said.

The competitors were taken by one of Istanbul's famous ferries to the start of the race on the Asian side of the city in the shoreside district of Kalinca.

When the race began they moved off the ferry onto a pontoon to dive -- or for the more nervous jump -- into the waters of the Bosphorus that divides Europe and Asia.

From there it was a tough 6.5-kilometre (four-mile) swim in the direction of the Sea of Marmara to Kurucesme on the European side of the city, close to the first bridge to span the Strait which is now named after the victims of the July 15, 2016 failed coup.

The Bosphorus is usually thronged with oil tankers, cargo ships and ferries making it one of the most choked shipping lanes in the world.

But the Strait was closed to traffic for the duration of the race, allowing swimmers an uninhibited passage across the waters, which were dotted with individual swimmers and the white crests in their wake.

The current pushes swimmers towards their destination, but good navigation is key because if they lose their way the swimmers risk being swept away and missing the finish.

A team of rescue boats kept a careful eye on the progress of the swimmers.

"The hardest thing is the current," said swimmer Viktoria Reshetilova, one of many from Russia, which formed the largest foreign contingent.

"The toughest part is not to be swept away and miss the finish. The best is being part of a movement."

Osman Sirin, a Turkish 46-year-old, expressed pride at the finish.

"The most difficult were the waves, especially during the last two kilometres. The best thing is being here now!"

The fastest swimmer was Turkish Cypriot Dogukan Ulac, who swam the 6.5 kilometres in just 46 minutes and 58 seconds.

The fastest woman was Hilal Zeynep Sarac, who finished in 50 minutes and 30 seconds.