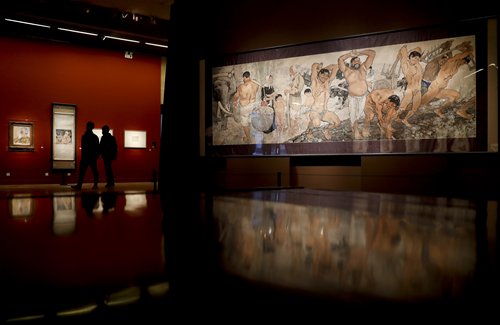 Three exhibitions - flowers, landscapes and the acclaimed 20th century master Xu Beihong - opened together last week at the National Art Museum of China in celebration of the coming Chinese New Year.The Xu Beihong and blooming flowers exhibitions last until March 4, while the Jiangsu artist landscape collection ends earlier: February 26. Xu BeihongRevered for his wild horses, Xu was born in Yixing, East China's Jiangsu Province, on July 19, 1895. He began studying classic Chinese works and calligraphy with his father Xu Dazhang when he was 6, and Chinese painting when he was 9. Beginning in 1919, Xu Beihong studied oil painting and drawing in Paris at the École Nationale Supérieure des Beaux-Arts. His travels around Western Europe allowed him to observe and learn Western art techniques. "Since the first half of the 20th century, a group of ambitious Chinese intellectuals traveled to Western countries for art truth," says museum director Wu Weishan."Through comparison of Chinese and Western cultures, they created something new. Of those artists, Xu Beihong was a pioneer of artistic innovation."Xu and his partner Jiang Biwei returned to China in 1927 where he taught at institutions including the then-National Central University, now Nanjing University. With the founding of the People's Republic of China in 1949, Xu became president of the Central Academy of Fine Arts and chairman of the China Artists Association. He died on September 26, 1953."He became a grand master and along with his educational role, he left a far-reaching influence on later generations," Wu says.Xu's lesser-known oils created a landmark in Chinese art history through the combination of Chinese classical epic stories and exquisite Western oil painting skills. But it was a peculiar talent for depicting birds and horses in ink that elevated Xu to global renown. "I like his horse painting best," says exhibition visitor Qin Zheng, pointing to an iconic Xu work. "I really appreciate his use of ink. It conveys a grace and sense of peace. "The painting is vivid and lively - the horse is touching his face with his hoof. I am also obsessed with traditional Chinese writings so I love to see calligraphy on a painting."Xu conveyed "national spirit" in his art, suggests Wu, the national museum director, "which was to combine both Chinese and Western culture. The purpose of this display is to pass down the spirit through new media and let visitors explore it in their new ways."Blooming flowers Bird-and-flower paintings belong to the scholar-artist style of Chinese painting. To help the public connect with Chinese culture's classical roots, the museum chose more than 100 representative works dating from the Song Dynasty (960-1279) to contemporary paintings of flowers, birds, fish and insects. Walking across centuries in seconds, the exhibition offers three time periods. "I don't know much about flowers and birds but I'm always seeking an opportunity to expand this area of my knowledge," Qin says. "That's why I'm here."Asked to compare, Qin's eyebrows furrow. He pauses a few seconds. "I'd say the first part is the most impressive to me," he says. "Maybe because I have a love affair with ancient China!" he laughs. "Among all these paintings, Zhu Da's work is my favorite, because I noticed all the birds in his pictures are rolling their eyes, which is quite interesting to me."Qin's choice seems quite inspired. Zhu Da or Bada Shanren (1626-1705) was a noted eccentric, who "had the genius of an immortal who disguised himself as a calligrapher and a painter" according to his contemporary Chen Ding."Shanren [Bada Shanren] was crazy! But how then can the production of his brush have such strength? I have asked people from his village, and they all said: 'He accomplished it while he was drunk.' Alas! Alas! One can get as drunk as he did, but not crazy as he was."The museum quickly fills with urban children and noisy teenagers marveling at the delicate flowers and birds of their rustic, scholarly ancestors. Many young people take selfies beside the more vivid and colorful scenes: The hares, chrysanthemums and chickens rule social media postings. Another small group gathers and points at a peacock by Ma Jin.Jiangsu landscapes Jiangsu Province enjoys a formidable artistic and literary reputation in mainstream Chinese culture. A list of famous literati or artists born about two millennia ago in the region once called "Wu" can be a little overwhelming. To help visitors absorb the region's dynamic artistic prowess, the museum simplifies all the diverse talent into two styles: a vigorous Han Dynasty (206 BC-280 AD) style and a more gentile style from the lost kingdom of Wu (222-280 AD). Modern artists naturally attempted to fuse the two styles together, forming a particular regional style of painting involving both broad brush strokes and exquisite detailing.The modern part of the Jiangsu exhibition showcases Jiangxi-born Fu Baoshi (1904-1965), a painter who revolutionized Chinese ink painting, opening the door to innovations by subsequent generations. Fu is joined by other famous Jiangsu artists alongside pictures and videos of the New Jingling Painting School from 1960 to 2016."Fu Baoshi began sketching with some other painters from Jiangsu in the 1960s," says Zhang Jianhua, chairman of the Jiangsu Provincial Federation of Literary and Art Circles. "They created a series of outstanding artworks on the topic of the new look of Chinese mountains and rivers which played an important role in the development of Chinese modern landscape paintings."Their works demonstrate their deep thinking of the new era and all are skillful. They are now regarded as having created a landmark in Chinese art history."