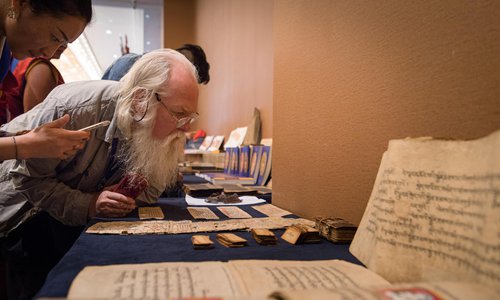 Southwest China's Tibet Autonomous Region has filed 18,000 ancient documents in an effort to better protect the unique cultural heritage of the region.

Among the documents, 291 ancient books have been listed as national rare antique books. More than 10 books comprising the ancient documents have been published, the Xinhua News Agency reported Monday night.

The registration is Tibet's largest ever census of its antique documents, which started in 2009. It is being promoted by China's national project on ancient documents protection initiated by the State Council in 2017.

Experts believe that China has more than 100,000 ancient documents in the Tibetan language, with more than half stored in the Potala Palace, Tibet Museum, archives and the region's 1,300 monasteries.

"The more than 40 ancient precious documents all have an 'ID number' now," Tenzen Guisang, a 53-year-old monk in Aburu Monastery of Xigaze, Tibet said. "Now, they have all been filed in a national database of ancient documents."

Tenzen Guisang is the chief of the monastery administration committee. He said that under the direction of experts, the precious books have received effective protection and been unveiled to the public to increase people's knowledge of them.

In the Aburu Monastery, the ancient documents are kept in glass showcases and marked in Arabic numbers.

In the past decade, the central government and the regional government invested more than 10 million yuan ($1.4 million) supporting the protection project.

More than 3,000 pages of ancient documents from Paingar and Mangra monasteries have been restored, Xinhua reported in September.

Next, the Ancient Document Protection Center in Tibet will set a standard to digitalize the ancient documents and will build a database on Tibetan ancient documents, said Benpa Tsering, vice chief at the center.