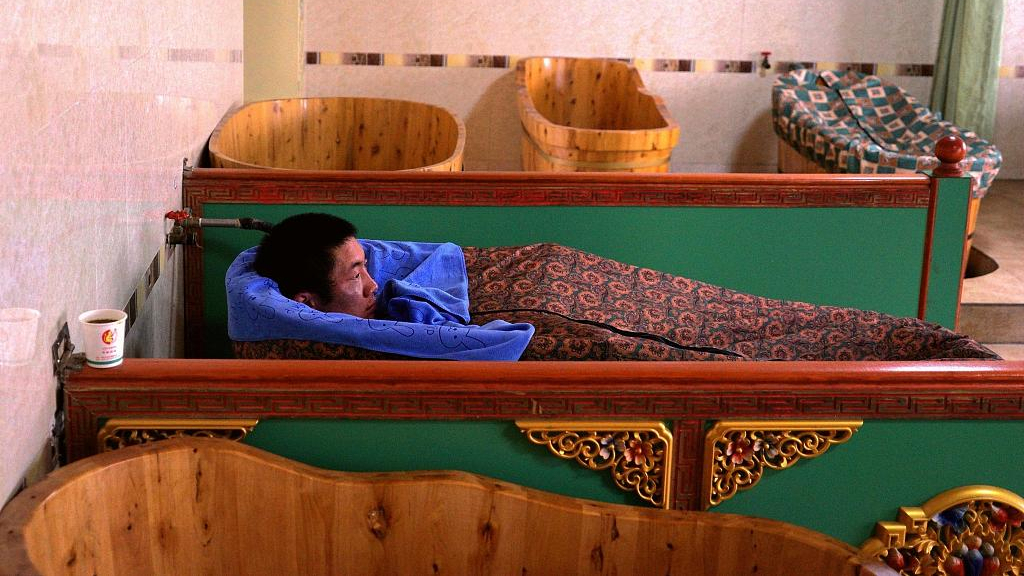 Tibetan medicinal bathing, a type of therapy that Tibetan people have adopted to treat various illnesses for thousands of years, is gaining popularity. However, its growing influence is also facing challenges, such as how to properly promoting the therapy.

Unlike recreational bathing in a public bathhouse, Tibetan medicinal bathing, also known as Lum medicinal bathing of Sowa Rigpa, has a medical use. Many people in southwest China's Tibet Autonomous Region rely on it to prevent and treat various illnesses.

"I was born in 1949 and I'm 71 years old. I've sought this treatment since I was diagnosed with diabetes. It can effectively relieve the symptoms of related complications," said Lobsang Dolma, a patient.

"Through opening the pores, the herbs' nutrients can easily be absorbed by blood capillaries, curing ailments of the body," he said.

Over the past few decades, he's witnessed the practice's evolution and ever-increasing popularity.

Producing the substance in which a patient submerges their body is a long process that involves unique techniques and several native wild herbs that require repeated boiling and fermentation.

Today, modern techniques facilitate the making of the liquid, such as in Tibet's largest traditional Tibetan medicine hospital in Lhasa, the regional capital.

"We've set up an extraction workshop. In the past, each step, from boiling to brewing to extracting herbs, was done manually. It's different now," said Dolma, another traditional Tibetan medicine doctor, adding that modern extraction equipment can greatly increase the output and improve the treatment's efficacy.

But experts say more efforts must be made before the practice is spread beyond Tibet.

Both Migdrol and Dolma hope the treatment can be enjoyed by a wider range of people, but the raw materials pose a challenge.

"All the herbs are indigenous. Tibet is abundant in various herbs, but the supply of medicinal materials will be a problem for wide promotion," said Migdrol.

In fact, as the influence of the therapy expands, many medical practitioners now have a concern – over-commercialization – which they believe will damage the authenticity of the tradition and harm the plateau's ecology.

A scientific industry guideline is expected to ensure the medical practice is properly developed.