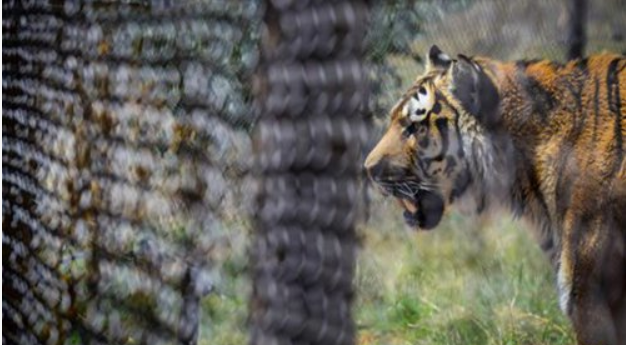 A rescued tiger in its enclosure at Lionsrock Big Cat Sanctuary, Bethlehem of Free State Province, South Africa on October 25, 2016, Lionsrock Big Cat Sanctuary, which was established in 2006, is the largest one of its kind in South Africa in terms of the number of the rescued big cats. It has already rescued more than 90 big cats including lions, leopards, tigers and cheetahs in inadequate conditions in zoos, circuses or private captivities all over the world. The rescued animals are provided with a lifelong safe home and habitat appropriate to their species that is large enough for family groups and facilitating natural behaviors.  (Photo: Xinhua)

A tiger forced to perform acrobatics in Central China died after escaping for one night of freedom, being captured and sent back to a zoo.

The cause of the tiger's death is yet to be confirmed. A zoo employee guessed injuries consistent with a car accident, local media dahebao.cn reported on Sunday.

Two directors of the circus where the tiger performed have been detained as they did not register the performance with official departments.

A video spread online shows the tiger suddenly jumping up to the top of the metal cage as the circus trainer uses a stick to direct it to perform on Friday night in Yuanyang county, Henan Province.

The trainer is seen trying to beat the tiger down but fails. At the same time, onlookers sitting outside the cage apparently panic and rush away.

The tiger ran into a nearby cornfield, media reported.

Fearing the tiger could harm residents, the government issued an emergency notice and police sent all their officers to search for the animal.

The police said on Saturday morning they had found the tiger and captured it by using anesthetic.

But a zoo staff member told media the tiger was dead on arrival. The tiger may have suffered internal injuries after being hit by a vehicle, he guessed.

The body of the tiger was refrigerated and the cause of death has yet to be identified, reports said.