CULTURE Tiger tees off as dramatic Masters final round begins

Tiger tees off as dramatic Masters final round begins 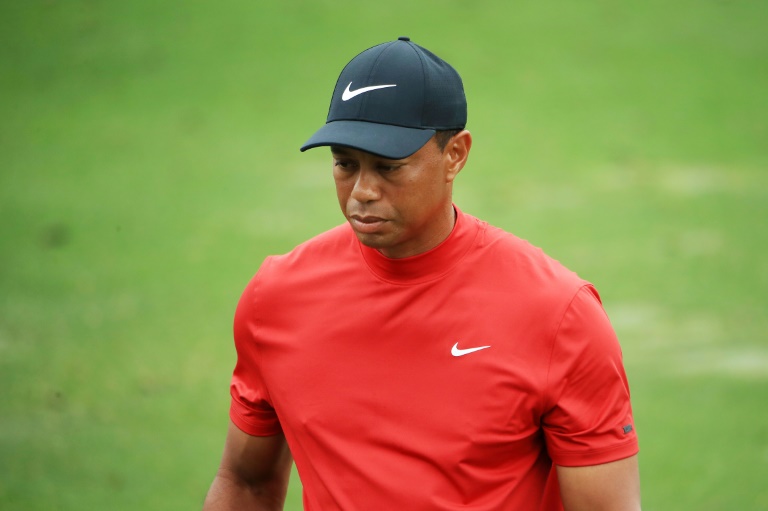 Tiger Woods, seeking his 15th major title and first since 2008, practices ahead of Sunday's final round at the Masters. (Photo: AFP)

Tiger Woods teed off in Sunday's final round of the Masters chasing his 15th major title, trying to capture his fifth green jacket to end an 11-year major drought.

The 43-year-old American superstar, back on form after 2017 spinal fusion surgery following years of nagging back pain, played alongside compatriot Tony Finau and Italy's Francesco Molinari in the last group at Augusta National Golf Club.

Reigning British Open champion Molinari seized the 54-hole lead on 13-under par 203 with Woods and Finau two strokes behind.

"It's golf, so the favorite is probably the golf course out there waiting for us," Molinari said.

"We're all very close. It's nice to be a little bit ahead, but you might just need one hole to change. You never know how it's going to go, especially around a course like here."

Augusta National advanced the final round to Sunday morning in a safety move with thunderstorms expected to arrive Sunday afternoon, when leaders would typically be battling for the Masters crown.

The storms, with hail and high winds producing tornadoes, led to three deaths and severe damage in moving across the southeastern United States.

The Masters, which has not had a Monday conclusion since 1983, decided to cancel its green jacket ceremony after the finish in order to hurry spectators to the exits faster due to the approaching storm.

Racing nature's fury to finish on the weekend added more tension to the unfolding Masters drama, which centered on Woods and his chance to win his first major title since the 2008 US Open on the same course where he won his first-ever major in 1997.

Woods, who could move nearer Jack Nicklaus's the all-time major win record of 18, contended last year at the British Open and PGA before snapping a five-year win drought by capturing the Tour Championship, his 80th career US PGA title leaving him two shy of matching Sam Snead's all-time record.

Electrifying shotmaking this week at Augusta National, cheered on by supportive crowds anxious to witness history, has Woods on the verge of a fairytale conclusion to a fightback from back pain so crippling he was unable to play with his children.

Woods has never fired so low in a Masters and not won the title but he has also never won a major title when not leading after 54 holes.

Plenty of rivals were in place to deny Woods his long-sought next major trophy.

Molinari, whose first Masters appearance was as a caddie to older brother Edoardo in 2006, outfought Woods last year at Carnoustie to win his first major title. The Italian then went 5-0 in a heroic Ryder Cup turn in France over an American team on which Woods went 0-5.

"The key for me is really going to go out and just do my thing. Staying aggressive," Molinari said. "Hit the shots. Hit the middle of the clubface as often as I can and make smart decisions, and we'll just take it from there."

Finau, the US PGA's first player of Tongan and Samoan heritage, leads the week in driving distance with 318.8 yards.

"I'm driving the ball nicely," Finau said. "And on this golf course, I can attack the golf course if I'm hitting my driver well."

Lurking as well is Koepka, who seeks his third victory in the past four majors -- a success rate seen only by Ben Hogan's three in a row in 1953 and the "Tiger Slam" four in a row by Woods in 2000-01.

"I'm pretty comfortable being up there on the leaderboard in a major come Sunday," Koepka said. "I feel good and I like my chances."