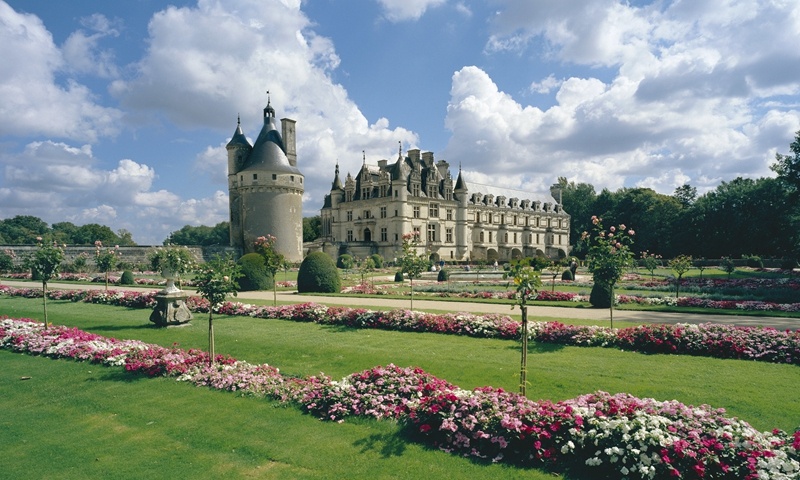 Staff far outnumbered visitors to the elegant Chenonceau castle in France's Loire Valley as it reopened on Saturday with meticulously prepared safeguards against the coronavirus.

The Renaissance jewel, which in a normal year attracts upwards of 1 million visitors, could not justify reopening on financial grounds until Parisians are again allowed to travel beyond a 100-kilometer radius from home, communications director Caroline Darrasse told AFP.

But reopening a few days early - the relaxation takes effect on Tuesday - gave the site a chance to test the precautions the staff have put in place, Darrasse noted.

A strict one-way route has been marked out inside the castle, and parts that risk crowding were either cordoned off or restricted to small numbers at a time - such as the impressive kitchens on the lower level of the building.

"It's her first chateau," grinned Lucile Daron van Gennep, 32, whose 8-month-old daughter was strapped to her front.

She and her 35-year-old husband Coenraad had the castle's gallery spanning the Cher river - where Catherine de Medicis once threw sumptuous balls - all to themselves.

"It's a nice surprise," Lucile said, speaking from behind her obligatory face mask. The couple live in Saumur, just within the 100-kilometer limit.

Many smaller sites such as the Chateau d'Usse, famous as the purported backdrop of the Sleeping Beauty fable, reopened at the very start of France's deconfinement on May 11.

In the Renaissance town of Amboise, the Clos Luce,  where Leonardo da Vinci spent the last three years of his life - 2019 was the 500th anniversary of his death - reopened on May 20.

"We did all we could to reassure people" of the safety of visiting the imposing manor in the heights of the town, director Francois Saint Bris told AFP on Friday.

The lockdown cost the site around 1 million euros ($1.1 million) in lost revenues per month, with outgoings totalling around 250,000 euros, he said.

On Friday however, visitors to the site were few and far between.

Similarly, things were slow at another early bird, the royal fortress of Chinon, where the 17-year-old Joan of Arc had a pivotal meeting with Charles VII in 1429.

Marie-Eve Scheffer, the curator of the fortress, said the four-day Ascension weekend, normally the busiest of the year, drew some 450 visitors, compared with a normal flow of around 3,800.

"We expect a bigger return next weekend," Scheffer told AFP by telephone.

"It will take off again," he told AFP.

"It's a matter of priming the pump, kickstarting the machine."

Bern, a champion of France's cultural and historical heritage who is a frequent radio host and television presenter, noted that as long as the sites cannot reopen their eateries and gift shops, visiting them is "less attractive."

The doyen of the region that was once the playground of French kings - the sprawling Chambord castle - will not reopen until June 12.

Tourism accounts for 15 percent of the Loire Valley region's economy, compared with 9 percent nationally. The sector normally brings in some 2.9 billion euros annually.

The Loire Valley - collectively a World Heritage site - jostles with Paris and Provence as a top French tourist destination, and is well positioned to edge out the French capital as the country emerges from lockdown.

At Chenonceau, one attraction has remained a constant throughout the confinement: a bucolic picnic area along the castle's canal, where a couple dozen visitors were enjoying lunch on Saturday.