CULTURE Tiny Dixville Notch may have to forfeit midnight voting

Tiny Dixville Notch may have to forfeit midnight voting 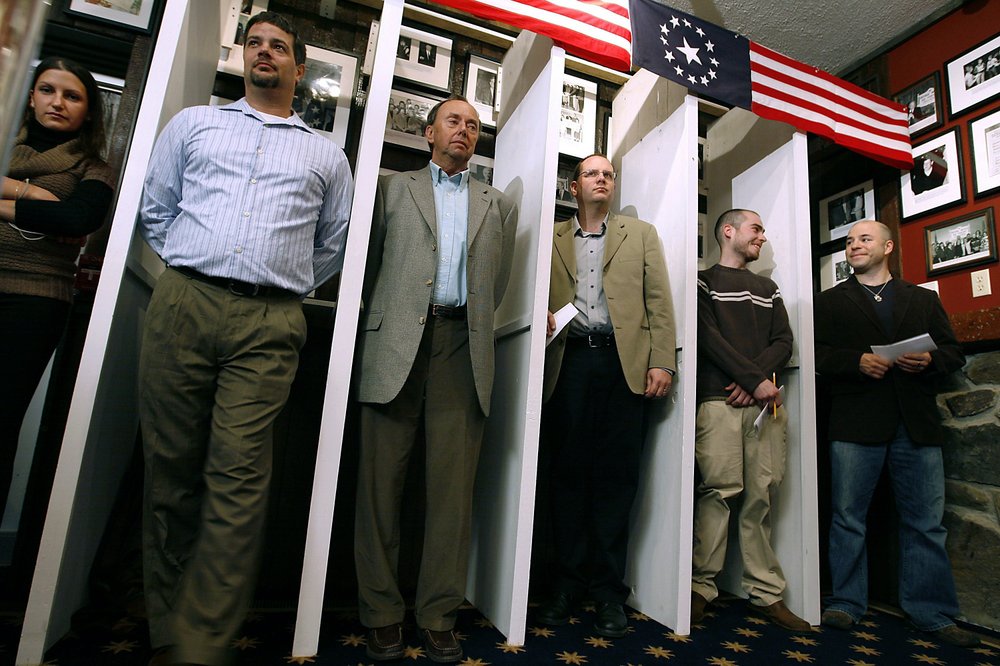 In this Nov. 4, 2008, file photo Dixville Notch residents wait for the stroke of midnight to be the first voters for the nation's presidential election in Dixville Notch, N.H. (Photo: AP)

A tiny, isolated community near the Canadian border known for casting ballots just after the stroke of midnight in presidential elections may need to forfeit that tradition in 2020.

Dixville Notch, New Hampshire, has been in the spotlight for years for voting first in the state’s first-in-the-nation presidential primary and in November general elections. But the attorney general’s office recently said the community is currently missing a required official in order to hold an election come the Feb. 11 primary.

Dixville Notch has shared midnight voting with two other places. One is Hart’s Location, a small town in the White Mountains that started the early voting tradition in 1948 to accommodate railroad workers who had to be at work before normal voting hours. Hart’s Location suspended the midnight voting in 1964 and brought it back in 1996. The town of Millsfield, 12 miles (20 kilometers) south of Dixville Notch, had midnight voting as far back as 1952, but stopped after a while. It decided to revive the early voting in 2016.

Dixville drew notice after Neil Tillotson, who bought a resort called the Balsams, arranged for early voting at the hotel beginning in 1960. Tillotson, who ran a rubber factory and is credited with inventing the latex balloon, died in 2001 at age 102.

For years, Dixville Notch attracted many political candidates and a lot of media. It’s believed to have reached its peak voting population in 1988. In the general election that year, 34 residents voted for Republican George H.W. Bush, and three voted for Democrat Michael Dukakis.

Voting was traditionally held in a wood-paneled room at the resort where political memorabilia was on display, but the resort closed in September 2011. Since then, voting has been held in a ski lodge orin a former culinary school nearby. The Balsams’ new owners are still planning to expand and reopen the hotel, but candidate visits to the area have faded. In 2016, just one, former Ohio Gov. John Kasich, made an appearance. He won the Republican primary in Dixville Notch.

“Since the hotel closed, I’ve had two fears: one, that we’d run out of people, or two, that the hotel would get redeveloped too big and we’d have too many people, either of which could put the voting in jeopardy,” said Tom Tillotson, Neil Tillotson’s son and thetown moderator. “That the voting was in jeopardy when the hotel closed was certainly a concern.”

The attorney general’s office said Dixville Notch needs a moderator, town clerk, two selectmen, two elections supervisors and a ballot clerk to hold its own election. One person can wear more than one hat regarding some, but not all, of the positions. But one of the five residents who was a selectman moved away, creating a vacancy.

If it’s not filled, Dixville Notch’s four residents — Tillotson, his wife, son, and another person — will need to contact the secretary of state’s office for assistance in joining nearby municipalities in order to vote, the attorney general’s office said. Tillotson said a member of the Balsams redevelopment team had planned to move to Dixville Notch. But if that didn’t happen, he’d be fine with voting in Millsfield.

Ïf it were the end of Dixville’s privilege of being first in the nation, I would think that’s too bad, but I know that during all the years that I was involved that it was a wonderful privilege for my fellow citizens and me,” said Steve Barba, who managed the Balsams for many years.

Barba described the early voting as a somber, yet wonderful experience. “It was real,” he said. “There were always chills.”