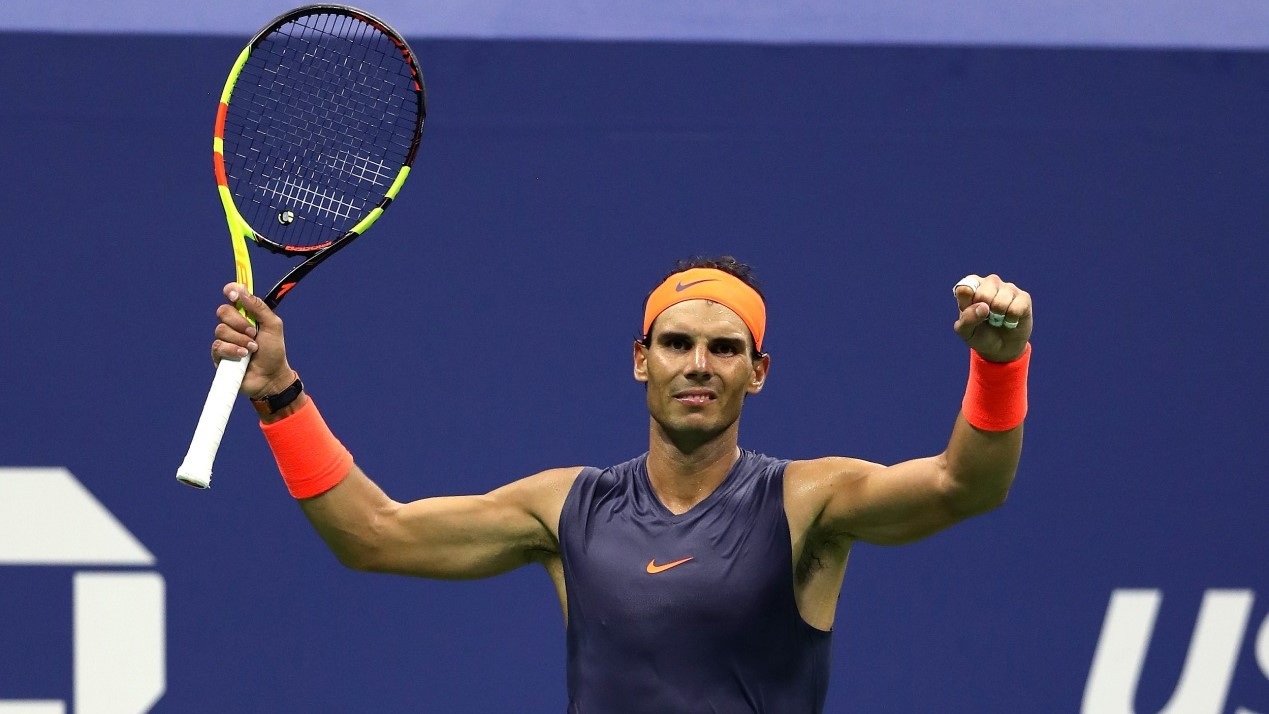 Rafael Nadal of Spain celebrates his five-set win in the men's singles quarter-final match against Dominic Thiem of Austria on Day Nine of the 2018 US Open. (Photo:  VCG )

In a gripping four-hour 49-minute contest which concluded at 2.04 a.m. on Wednesday, world number one Nadal won through to keep his bid for a fourth title in New York and 18th Grand Slam crown on track.

However, the 32-year-old was fortunate to triumph on another hot and humid night at Flushing Meadows, 24 hours after Roger Federer had been dumped out of the tournament by John Millman.

After suffering a first set 'bagel', Nadal had to battle back from breaks in the third and fourth sets before seeing off the first top 20 player he had faced at the US Open since 2013.

“I suffered, that's the right word,” said Nadal after playing his longest ever match at the tournament. “I said to Dominic I am sorry. He's a great guy, a close friend who will have many more opportunities to win the big titles. He has a great attitude and is a great fighter.”

In a dramatic final set, Nadal saw five break points come and go before Thiem went long with a smash on the first match point. It was his 58th unforced error on a night when he sent down 18 aces and fired 58 winners. The semi-final will pit Nadal against third seed Juan Martin del Potro for the second successive Grand Slam.

At Wimbledon, Nadal came back from two sets to one down to win in five in a quarter-final which stretched to almost five hours.

Thiem broke three times in a 24-minute first set, handing Nadal just his third ‘bagel’ at a Grand Slam. The top seed won just seven points in the opener. – ‘Wake up’ – “I told myself ‘wake up’,” said Nadal. Nadal then recovered from being broken as he served for the second set in the ninth game with an immediate break back to level the contest.

Thiem then grabbed a 4-3 lead in the third which he stretched to 5-3 but then it was his turn to crack as Nadal raced away with three games to claim a two sets to one lead. Thiem was 4-2 ahead in the fourth set before he was again reeled in and he was two points from defeat in the 12th game. But he took the tiebreaker before Nadal just proved the steadier of the two in the final set decider.

Wednesday's quarter-finals will see two-time champion Novak Djokovic face Millman, the world number 55. Marin Cilic will face Kei Nishikori in a repeat of the 2014 final won by the giant Croat.