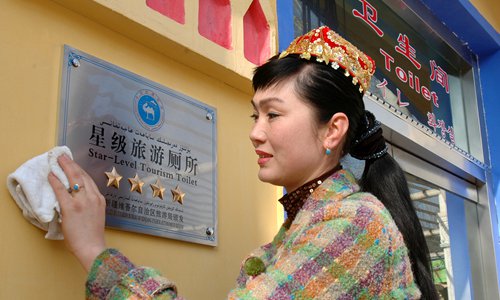 A woman wipes the tablet of a star-level tourism toilet in Turpan of Xinjiang. (Photo: IC)

Fuyun county started building new toilets for local residents years ago under the call for a "toilet revolution." From the beginning of this year, local government helped build a bathroom with a squatting pan and a wash basin for every household in the county, Hu Jinliang, an official from the publicity department of Fuyun county in Altay Prefecture, told the Global Times.

Since China has pressed ahead with the "toilet revolution," many rural households have been freed from using dirty latrines and have turned to cleaner and renovated flush toilets, the Xinhua News Agency reported in March.

Fuyun county has also updated public lavatories. The Global Times reporter saw in a public toilet in Fuyun that it is divided into different areas. Aside from answering the nature's call in one area, patrons can also read books on a digital machine and withdraw cash from a cash dispenser. There is also a water dispenser and an automated machine to dispense tissues.

On the public lavatory walls hang pictures of the history of the county and Xinjiang. Light music can be heard at a volume that would not bother anyone.

Hu noted that there are dozens of public lavatories in the county with similar equipment, and the cleaning staff clean them regularly. "Local residents and tourists coming to Fuyun speak highly of these infrastructures," Hu said.

In addition, many other places in Xinjiang are updating toilets for  convenience to residents and tourists as the region is welcoming more domestic and overseas tourists.

Tourism has boomed in Xinjiang in recent years. The regional government released a guideline to promote the building of toilets in August, especially in popular scenic spots, Xinjiang Daily reported.

Urumqi has built 23 public lavatories this year. Two of them were near the Xinjiang International Grand Bazaar, a very popular spot with an average visitor flow rate above 168,000 people during the National Day holiday, which greatly helped visitors, Urumqi Evening News reported.

In 2018, Urumqi finished updating 200 public toilets in central urban areas and it will accomplish the project of rebuilding 235 in urban areas by the end of the year, according to the report.

Aside from meeting basic demands of visitors, many places in Xinjiang also pay attention to making the public lavatory part of the scenery. For example, a public lavatory, which looks like a "castle made of Yardang landform"in a scenic spot in Karamay City has attracted many visitors to take photos.

Every public lavatory in the scenic spot is different from each other and they perfectly become parts of the environment, news.ts.cn reported.