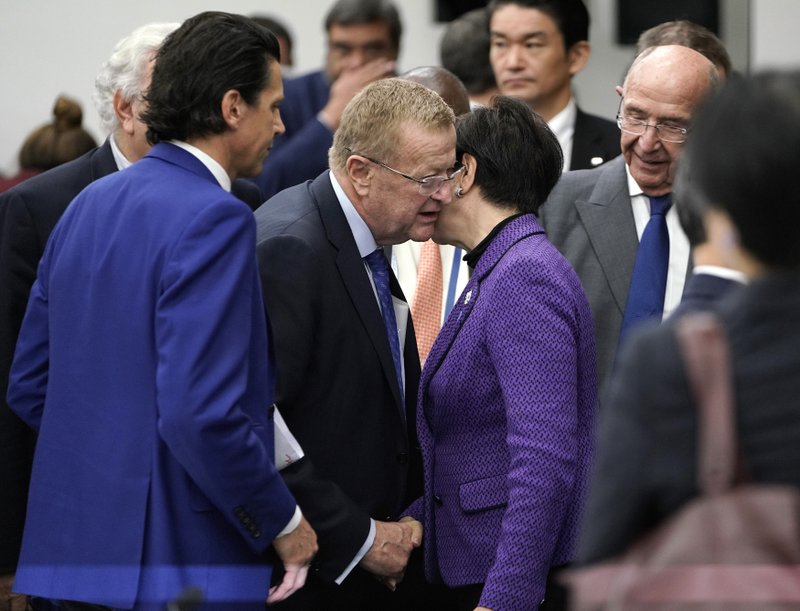 After two weeks of bitter debate, the Tokyo Olympic marathon is still going north to Sapporo.

And Tokyo Governor Yuriko Koike isn’t happy about it.

“I dare say, this is a decision without an agreement,” Koike said Friday, speaking through an interpreter at talks with the IOC and local organizers.

She conceded the powerful International Olympic Committee had won over her objection to keep the race in the Japanese capital.

“We cannot agree or concur with the decision of the IOC,” Koike added. “But the IOC has the final authority to change and we will not obstruct the decision.”

Despite a midnight start, dozens of runners collapsed on the marathon course at the world track and field championships. Some were carried away on stretchers, and others rode wheelchairs to ambulances.

IOC member John Coates, who has been meeting with Koike for a week on an inspection visit to the Japanese capital, likened Tokyo’s summer conditions to the Arabian peninsula, even after the city agreed to start the race at dawn.

“The images out of Doha — when you finally saw the effect on athletes,” Coates said, his voice trailing off.

He called the climatic conditions “very, very similar” to Tokyo.

Tokyo has warm, humid summers with temperatures routinely in nudging 35 degrees C (95 degrees F). It is not so different from Atlanta, which hosted the 1996 Olympics, or Athens, the 2004 venue.

“There are certain points that cannot be resolved — things still nagging in our hearts,” Koike added, noting Tokyo residents will be deprived of an event that’s free.

Olympic tickets in Japan are very difficult to find, with demand at least 10 times over supply.

In addition to the decision itself, Koike was angry that it was made unilaterally by IOC President Thomas Bach.

It’s unclear why the IOC moved on its own, since it knew about Tokyo’s heat when it awarded the city the Olympics in 2013. Bach and IOC leadership might have guessed that Tokyo officials would not readily approve such a radical change. That was accurate.

“With all the good work that’s gone into preparations, we didn’t want Tokyo being remembered — in the minds of your people and the minds internationally — by some of the scenes we saw in Doha,” Coates said.

The IOC on Friday agreed that Tokyo, which Bach has termed the “best prepared games,” will not pay for moving the marathons and race walks. And some expenses to organize the marathon could be reimbursed.

According to a national government audit report last year, Tokyo is spending about $25 billion to organize the Olympics. Organizing committee officials dispute the figure and say it is half that, raising the debate about what are — and are not —Olympic expenses.

In a letter to Koike, Bach offered to help organize a “celebration marathon” next year on Tokyo’s Olympic route. In a related move, the International Paralympic Committee has said it plans to use the Tokyo course in September.

Bach said the move was made to protect athletes and acknowledged in his letter that the IOC was caught in “an unfortunate situation.”

“It’s not that difficult to think there are so many mixed feelings,” she said through an interpreter. “Some are rather perplexed. I hope the athletes can switch their minds quickly.”

Coates was asked if the same unilateral decision would have been imposed if the host nation were larger and more powerful, like the United States or China.

In 2008, athletes arrived to train for the Beijing Olympics, some wearing masks to avoid the city’s severe air pollution. The floating dust also posed a grave risk to athletes, but the IOC did not push openly to move the marathon out of the city.

“This is a very strong country,” Coates said of Japan, sidestepping a direct comparison to China or the United States.

The unilateral move has created bad feelings and offers a rare glimpse of behind-the-scenes disputes between the IOC and local Olympic organizers.

Yoshiro Mori, the head of the organizing committee and a former prime minister, described Coates barely eating his meal at dinner on Thursday.

“We had a very good dinner party and during the party he (Coates) was not able to eat at all,” Mori said. “From his seat he was communicating, probably with president Bach — emailing or talking with him.”