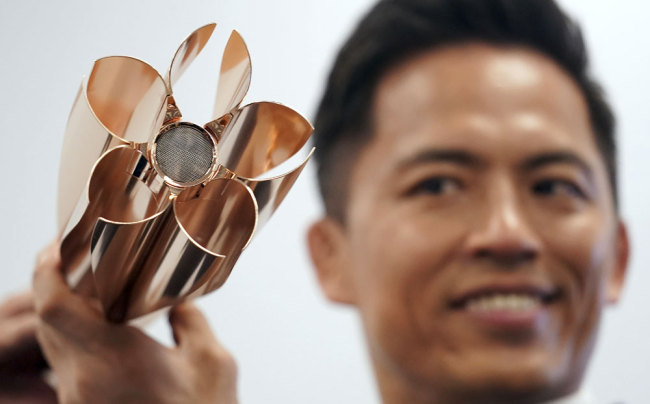 The unveiling came exactly one year before the Olympic flame is due to arrive from Greece at Matsushima Airbase in Miyagi prefecture.

Bearing a motif of sakura cherry blossoms, Japan's most familiar and best-loved flower, the torch was designed in line with the relay's theme of "Hope Lights Our Way," and coincides with the arrival of the country's cherry blossom season in March 2020.

With the color of "sakura gold," the torch has a length of 710mm, and weighs 1kg in the body plus a 200g fuel cell, according to the Olympic organizers.

The shape of the torch resembles that of a Japanese traditional "Sakuramon" cherry blossom emblem, as it constitutes a central column with five petal-shaped attachments. It was shaped into this form using the same aluminum extrusion technology used in the manufacture of Japan's bullet trains.

As an effort to showcase the 2020 Games as "reconstruction Olympics," 30 percent of the aluminum used in the torch came from material recycled from temporary housing in the devastated northeastern Japanese prefectures in the 2011 earthquake, tsunami and nuclear disaster.

Tokujin Yoshioka, the torch designer who is also active in the fields of architecture and contemporary art, unveiled the torch together with Tadahiro Nomura, Japan's three-time Olympic champion judoka and one of the torch relay official ambassadors.

"To actually be holding this superb work, is frankly giving me shivers," Nomura said after holding the torch on the scene. "I can only imagine the joy on the faces of people lining the route of the relay when they see it."

According to the organizers, the Olympic torch is expected to arrive in Japan on March 20, 2020 and will be carried to Ishinomaki Minamihama Tsunami Recovery Memorial Park in Ishinomaki, Miyagi Prefecture.

The flame will be displayed in some cities in the disaster-hit prefectures before the relay starts on March 26, 2020 at the J-Village national soccer training center in Fukushima prefecture and will travel across all 47 prefectures in Japan over a period of 121 days.

According to the organizers, about 10,000 torches will be prepared for the relay which will conclude at the New National Stadium in Tokyo on July 24, 2020 for the start of the Games.