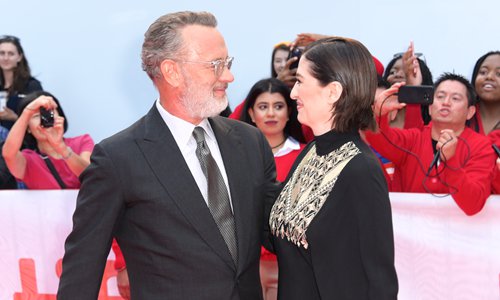 Scantily-clad strippers and softly-spoken kids' TV stars were on show Saturday as the Toronto film festival hit its stride with a wide range of hotly anticipated premieres.

Screams from the red-carpet crowd could be heard blocks from the city center as Jennifer Lopez headed a cast of glamorous leading ladies for the world premiere of Hustlers.

Constance Wu (Crazy Rich Asians) and singers Cardi B and Lizzo appear in the star-studded movie about the New York strippers who turned the tables on wealthy businessmen during the financial crisis.

The real-life tale - billed as a female Wolf of Wall Street - depicts how a group of women resorted to increasingly criminal tactics, such as spiking men's drinks before emptying their bank accounts, as the stock market crash hit strip club receipts.

Lopez said the film puts a spotlight on how society is more harsh to judge women than men "when they're stealing or robbing people blind."

Men "are doing it on this big corporate level and these girls are doing it that kind of small street level - and they get off and [the girls] go to jail," she said.

Earlier, Tom Hanks kicked off the evening with A Beautiful Day in the Neighborhood, based on the unlikely true friendship between a cynical investigative journalist and Fred Rogers, the impossibly nice US television presenter he is sent to interview.

The movie, directed by Marielle Heller on a gala night dedicated to female filmmakers, blends Rogers' trademark nursery-rhyme stylings with hard-edged family drama, and drew a lengthy ovation at its world-first showing.

While describing Hanks as the perfect casting to play a beloved national treasure, Heller insisted the Forrest Gump star's preparations for the role had been "transformative."

"He did not just slip on this cardigan and 'boom' he was Mr Rogers - he actually truly goes to a very deep place," she told AFP.

Hanks said had been too old to watch the long-running Mr Rogers' Neighborhood program while it aired, admitting he "didn't get" the "really weird black and white TV show" as a child, but was won over by its host.

"Mr Rogers doesn't want anything except for people maybe to understand themselves and the world a little better," he said.

Matthew Rhys, the Welsh actor who plays the film's journalist, said Rogers - who died in 2013 - "bucked the norm" of goofy custard pie-throwing theatrics on kids' TV.

"That's the last thing children want - they want calm, they need to be treated maturely," he told AFP.

Across the street, Eddie Murphy marked his big screen comeback by attending the premiere of Dolemite Is My Name, his biopic of US comedian Rudy Ray Moore, famed for his outlandish 1970s Blaxploitation character.

The Beverly Hills Cop star, who recently announced he would return to stand-up comedy from next year, received a standing ovation from the Toronto crowd.

Craig praised the cast for the film - described by the Hollywood Reporter as a "deviously irreverent crowd-pleaser" - as "a lightning in a bottle situation."

Earlier on Saturday, Oscar-winner Jamie Foxx called on the US to tackle the "sinister undercurrent" of racism in its justice system, after his courthouse drama set in a starkly polarized Deep South debuted the previous night.

Foxx and Michael B. Jordan - two of Hollywood's top black A-listers - co-star in Just Mercy, the true story of a black man put on death row in Alabama in 1988 for the murder of a young white woman he did not commit.

"We wanted to make sure people understand how tragic it is, and how commonplace it is - it happens all the time," said Foxx, who plays wrongfully convicted Walter McMillian.