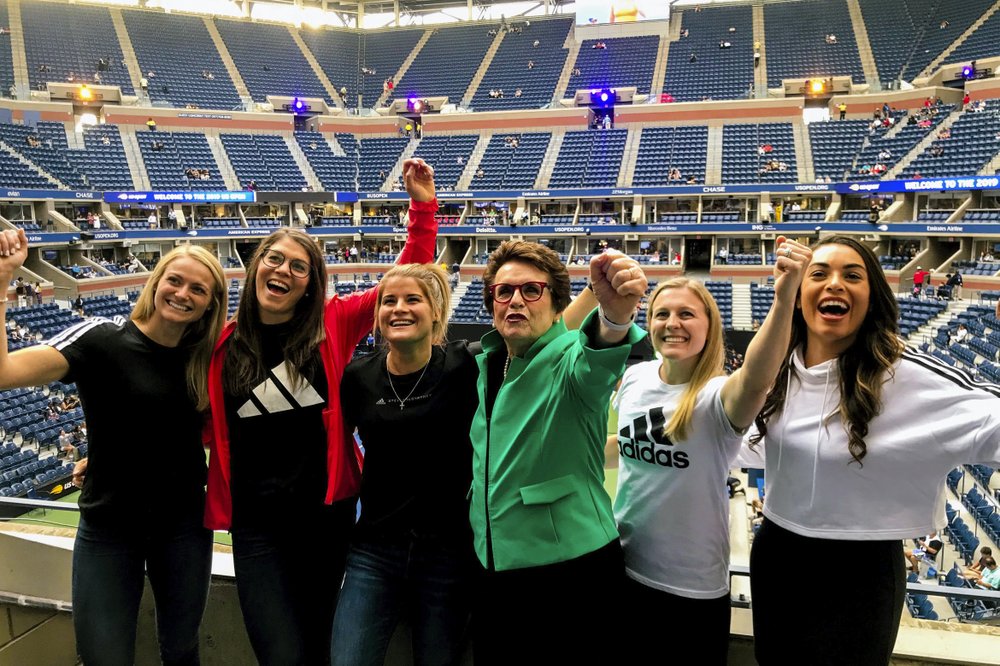 Growing up, Kendall Coyne Schofield recalled how her dreams of playing hockey ended at college, or maybe the Winter Games — something the two-time US Olympian forward eventually would achieve.

Playing professionally was never part of the equation, which is something Coyne Schofield remembers once mentioning to former American star Cammi Granato, noting how girls can only win gold medals while boys can win Stanley Cups.

“You always grow up and hear boys say, ‘I want to be a pro hockey player one day.’ You don’t hear little girls saying that. They say, ‘I want to go to the Olympics,’” Coyne told The Associated Press by phone Tuesday. “That’s the pinnacle of our sport. I can’t make a living playing this sport. ... So when I graduate college, I either go to the Olympic Games or get a job.”

Coyne Schofield and more than 200 of the world’s top female players who have pledged to not compete in North America this season are determined to change that notion.

They’re launching what’s being called “The Dream Gap Tour,” announced by the newly formed Professional Women’s Hockey Players’ Association on Wednesday. The gap represents the missing link young girls have in their dreams of ever playing professionally.

The tour’s first stop will be in Toronto from Sept. 20-22, followed by an event in Hudson, New Hampshire, on Oct. 4-6 and Chicago on Oct. 18-20. The union also announced its members will play exhibition games against Boston College on Sept. 21 and against the Sharks alumni in San Jose on Sept. 22.

Additional tour stops are being considered but not yet finalized, including Southern California and Buffalo, New York. Among the sponsors already on board are Adidas, and the players are also backed by Billie Jean King Enterprises.

The stops will feature about 80 players split into four teams playing a three-game round-robin tournament followed by a championship game, and include youth clinics.

It’s essentially a barn-storming tour made up of PWHPA members seeking to bring the sports’ stakeholders — including the NHL, USA Hockey and Hockey Canada — to the table to establish a single league with a sustainable economic model, featuring the world’s top talent, and pay a livable wage and include health care.

The boycott and the union were born out of the demise of the Canadian Women’s Hockey League, which folded due to financial reasons last spring. That left the US-based, five-team National Women’s Hockey League as North America’s only pro women’s league. It is privately backed and has endured financial struggles since being established in 2015.

The tour is considered the union’s coming-out party, and feature players wearing jerseys with PWHPA logos.

“We’re not talking about millions of dollars here. We just want to be able to live and train full time, and see how far we can take this game,” said defenseman Alyssa Gagliardi, who has played in both the CWHL and NWHL. “For so long, it’s only been limited to the girls on the national team that can truly do that full time, so this is kind of broadening that.”

Growing up in Raleigh, North Carolina, Gagliardi had no role models to look up to except for tuning in to the Winter Games every four years. She’s looking forward to making a positive impression on young female hockey players during the tour.

“This is what we’re fighting for,” Gagliardi said. “I think we want to really make sure this stays with them for the rest of their lives, and by the time they’re graduating college there’s a place for them to play.”

Billie Jean King entered the picture to provide guidance. On Monday, she was joined by five female hockey Olympians, including Coyne Schofield, at the US Open, where they posed for a picture posted on King’s Twitter account hinting at the Dream Gap Tour announcement.

Having blazed a trail in starting women’s professional tennis in 1970, King sees an overlap in other sports.

“We envisioned a world where any girl, if she is good enough would have a place to compete, would be appreciated for her skills and accomplishments, and could make a living playing professional tennis,” King said. “Today, almost 50 years later, the women of professional hockey, soccer and other sports are facing the same situation, and our vision has not changed. Everyone should be able to have the dream and the opportunity to earn a living playing the sport they love.”

Coyne Schofield was so excited to meet King that she took in her exhibit at Arthur Ashe Stadium and even bought a King doll at the gift shop.

King’s message, however, is what resonated most.

“She always says, ‘If you see it, you can be it,’” Coyne Schofield said, reflecting on watching Serena Williams compete and seeing the picture of the original nine professional tennis players including King who formed the first women’s tour. “For me, that was the moment when I saw it. She built this and we’re literally living in it. And you know what, we have the opportunity to do that.”

She said it’s long past time the best female players from around the world have the opportunity to showcase their talents in one league.

“We can’t just keep accepting the fact that we’re grateful for an opportunity (of playing professionally),” Coyne Schofield said. “We’re done being grateful, and we need to stand up for what we know is right. Because if we don’t stand up today and fight for what’s right, we’re setting up the future to fail.”