CULTURE Tour insists it is working for a greener sponsors' caravan

Tour insists it is working for a greener sponsors' caravan 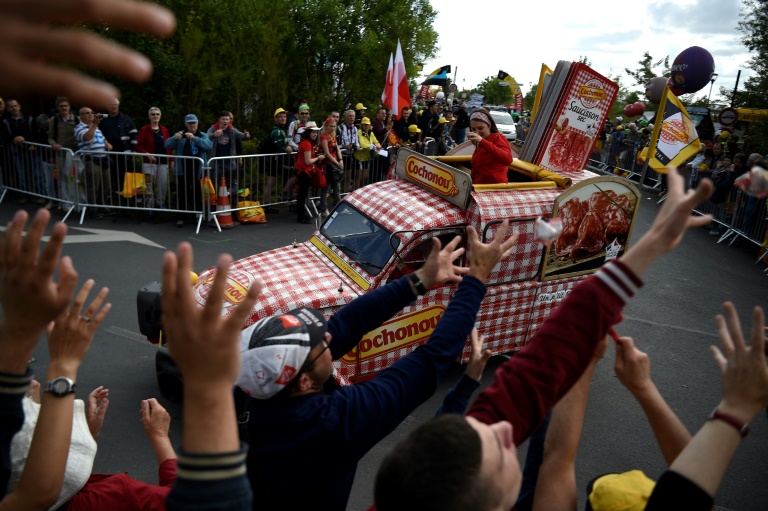 Fans waiting for the Tour peloton grab for free sausages thrown from one of the vehicles in the caravan. (Photo: AFP)

The Tour de France on Wednesday responded to French MPs who complained about the quantity of plastic objects thrown to fans from the marketing caravan that precedes the peloton along the route.

"For five years now, we have been working with our partners to reduce plastic in the gifts that sponsors give the public," Tour director Christian Prudhomme wrote to French MPs who recently published a paper on the subject.

"We have included in the specifications and standards that we impose on our partners, the obligation to be part of a process to reduce the use of plastic.

"For example, caps and T-shirts that once were packaged in a plastic bag are now always distributed without packaging."

About 30 MPs, led by Francois-Michel Lambert of the French Green Party, had denounced the plastic pollution caused by the "18 million goodies that are distributed and thrown into the wild".

The MPs also criticised the tacky quality of the free gifts and said that while they were "lovers of the Tour", they were "even more in love with our countryside, our mountains".

They called for "an advertising caravan free of these plastic objects that we do not need".

Prudhomme responded that the Tour was taking action.

"It seems to us that sponsors are keen to hand out gifts that please the public and can be taken home," he said.

Prudhomme said that the Tour was also striving to reduce its environmental impact on 82 sites on the 2019 route that form part of the "Natura 2000" European network of protected areas and habitats.

He said the caravan would stop distributing gifts and turn off their sound systems in those areas, while the television helicopters would not fly over