For fans of traditional Chinese operas, when the lights are dimmed and the curtain goes up, they are immersed in the actors' techniques of singing, martial arts and the exquisite costumes as well as the band playing the gongs and the drums on the side of the stage. 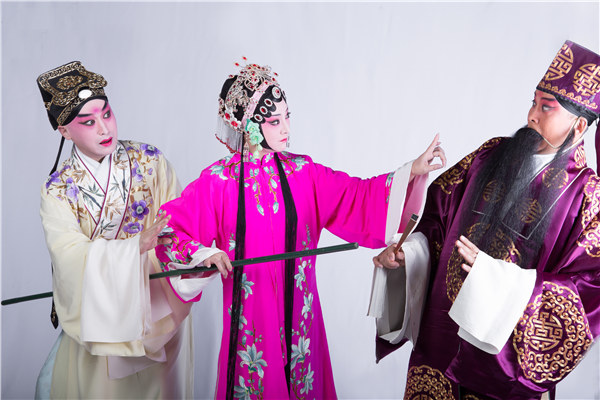 The stories are usually adapted from traditional Chinese folklore about heroes, life and death, and justice.

"Comedy is difficult. But for the first time, we have traditional Chinese operas at the comedy festival because we want to show audiences a different side of the ancient art forms, which could be fun and entertaining," says Yang Qianwu, secretary-general of the Beijing Theater Association, one of the initiators of the Beijing International Comedy Festival.

Launched in 2017 by the Beijing Federation of Literary and Art Circles, the festival kicked off on July 22 and will run through Aug 22 with 14 comedies staged at popular theaters in the capital, including the Mei Lanfang Grand Theater, the Longfu Theater and the Drum Tower West Theater.

The Northern Kunqu Opera Theater will stage its production, Shi Hou Ji, or The Lioness Roars, on July 26 and 27, and it is a comedy based on a work originally titled Gui Chi, or Kneeling by the Pond, by Wang Tingne of the Ming Dynasty (1368-1644). It's about a henpecked husband and a jealous wife.

One of the oldest traditional Chinese opera forms, Kunqu Opera, which is about 600 years old, combines singing, dancing, martial arts and lyrical recitation, performed in the melodic Suzhou dialect.

UNESCO listed Kunqu Opera as an intangible heritage of humanity in 2001.

The Northern Kunqu Opera Theater, founded in Beijing in 1957, is the only professional theater in northern China dedicated to Kunqu Opera. And it premiered the play three years ago in Beijing, featuring award-winning Kunqu Opera actor Shao Zheng and actress Wei Chunrong.

Speaking about his role, Shao, who plays the husband in the play, says: "The story of Shi Hou Ji is well known in China, but when I read the original script by the Ming Dynasty writer, I was amused by the lines, especially the portrayal of the timid husband and how he tried to lie to his wife after he got drunk."

Shao, 48, was enrolled to study Kunqu Opera in 1982 at Beijing Opera and Arts College when he was 11 years old. And in 1988, he started working with the Northern Kunqu Opera Theater.

Recalling why he was drawn to the art form, he says: "Kunqu Opera is known for its smooth and soft singing. And the roles are usually elegant and sentimental. But when it comes to comedy, the art form shows a fresh side. It's rare and interesting."

The 200-year-old Peking Opera, like Kunqu Opera, is typically considered serious and old-fashioned. But with a comedy, entitled Chun Cao Chuang Tang, actors of the China National Peking Opera Company tell the story of a brave servant girl, named Chun Cao, who battles an irresponsible official with her wisdom.

Zhang graduDuring the festival, the China Pingju Opera Theater, which was founded in 1955, will stage one of its most famous plays, Yang Sanjie Goes to Court, on July 25. Set against the backdrop of the end of the Qing Dynasty (1644-1911), it revolves around three sisters of the Yang family.

In the play, the second sister, Yang Erjie, is murdered by her husband and the youngest sister, Yang Sanjie, tries to avenge this by taking the husband to the court.

Actress Wang Lijing, who plays Yang Sanjie, says: "It's a heavy story but is handled by scriptwriter Cheng Zhaocai in a critical and humorous way."

The story of Yang Sanjie Goes to Court was adapted into a film in 1981, starring Zhao Lirong as the mother of the Yang sisters.

It was this film that drew Wang to the art form. She says: "I watched the film when I was 7 years old and fell in love with Pingju Opera."

Other highlights of the Beijing International Comedy Festival are Chinese musical Mr & Mrs Single, Chinese play Bird Man and Happy Dinner.ated from the National Academy of Chinese Theater Arts and started learning with her master, Liu, in 2012.

"The character Chun Cao is always well received by the audience. And we've frequently revised and staged the play around the country for the past five decades," Zhang says.

When it comes to female comedians in China, there is no one to match the late actress Zhao Lirong (1928-2000), who was a famous Pingju Opera actress. And she, along with other Pingju Opera artists, such as actress Xin Fengxia (1927-98), is credited with popularizing the art form, which is popular in northern China.