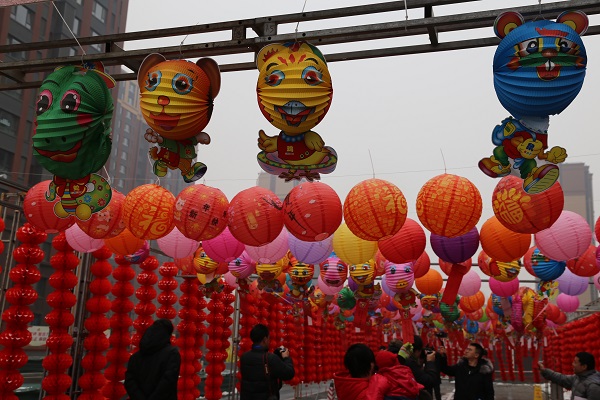 The first Beijing South Spring Festival Fair with the theme “New National Window, New Daxing”, featuring the Spring Festival culture of south Beijing, was held in Yufa Town in Beijing's Daxing District on Tuesday. Harbor Home, where relocated residents from Beijing’s new airport project live, is the supporting venue of the temple fair. This photo shows many lanterns with riddles hanging from them at the venue. (Photos: People’s Daily app) 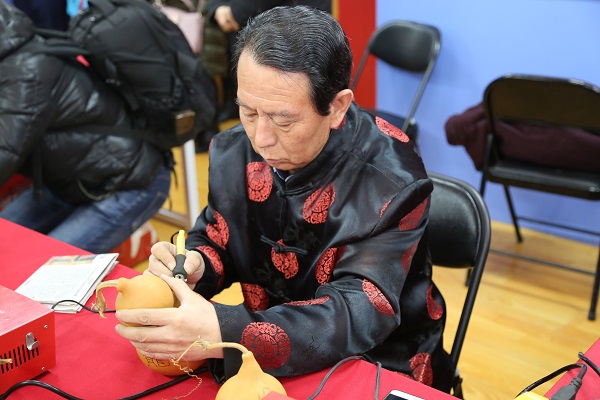 Seven handicraft performances were presented at the supporting venue featuring performer-audience interaction. This photo shows pyrography, which is also called hot-painting. The craftsman is carving a gourd. 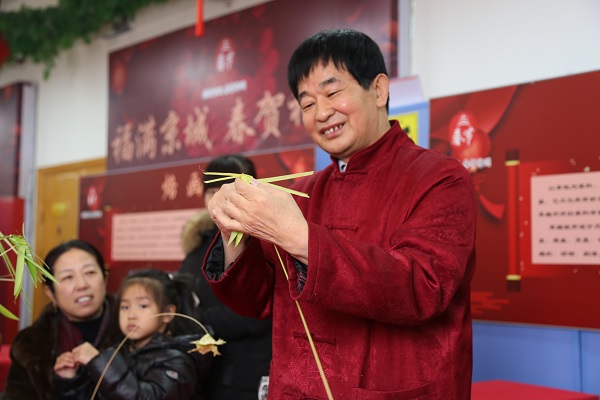 This photo shows the straw weaver performance, a traditional Chinese handicraft and an important part of the traditional folk culture. The material the craftsman uses is always grass. This photo shows the three Peppa pigs made from dough by the craftsperson. The dough figurine performance, also known as dough modeling, is a kind of Chinese folk arts with high artistic value. 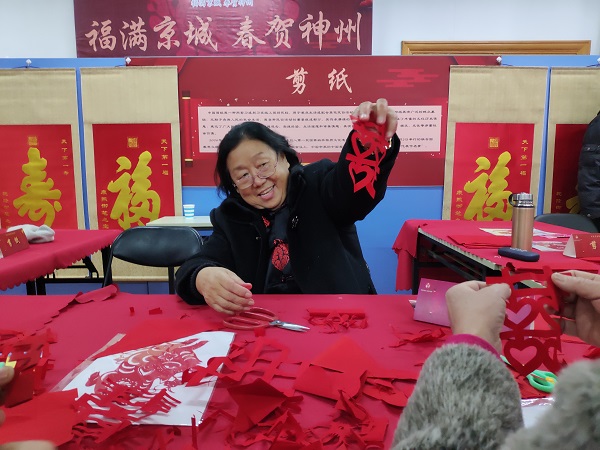 This photo shows a craftswoman doing paper cutting. Paper cutting is one of the oldest folk arts in China. People use scissors to cut paper into various patterns, such as window grilles, sills, wallflowers, ceiling flowers and lanterns. The craftswoman is cutting paper into the Chinese traditional ornament design shuang xi, meaning double happiness. It is commonly used as a symbol of marriage. 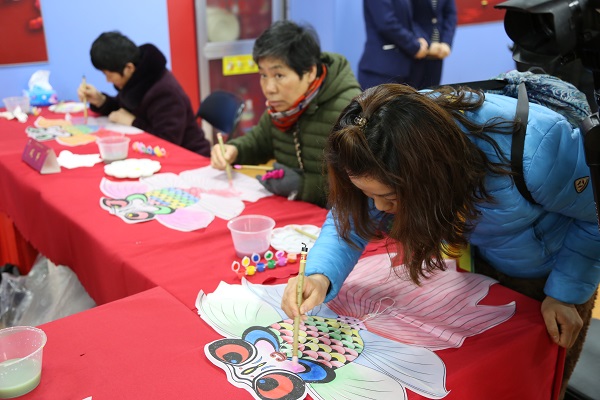 This photo shows visitors making kites. Kite flying has a history of more than 2,000 years in China. It was thought to be a means of passing military information during war in ancient times, and gradually became a popular folk pastime in spring. 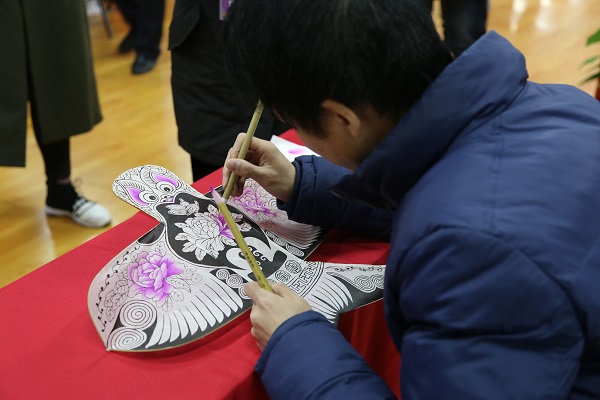 This photo shows a craftsman making the kite. What is displayed at the venue is “Cao’s Kite”, which has passed the sixth batch of tangible cultural heritage application review in the Daxing District. 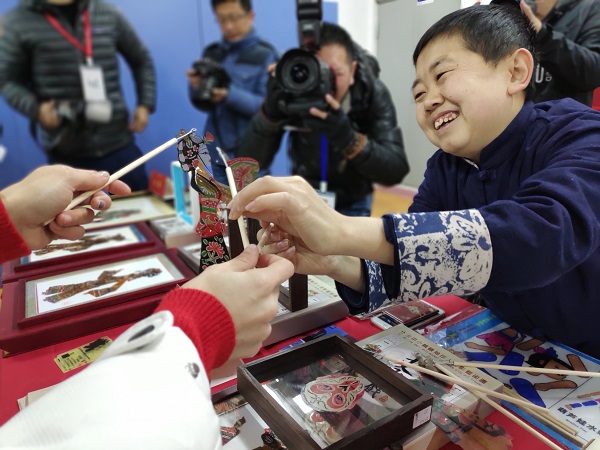 This photo shows a craftswoman interacting with a visitor during a shadow puppets performance. Shadow puppet performances, or shadow play, is an ancient form of storytelling which uses flat articulated cut-out figures (shadow puppets) to perform behind a curtain or screen. The shadow of these figures can be projected onto the screen by a light source, so the audience can see the performance from the other side of the screen. 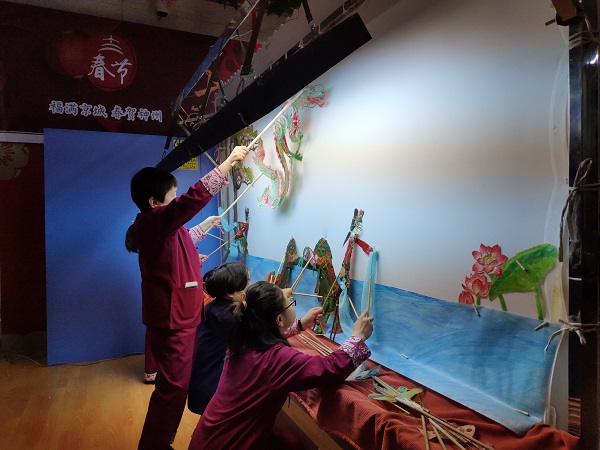 This photo shows the craftsperson performing a shadow puppet show. The Small Ant Shadow Art Troupe, the Daxing District-level intangible cultural heritage representative project, perform at the venue. The troupe was founded in 2008 and was invited to embassies of various countries for cultural exchanges. It is very popular among friends at home and abroad. 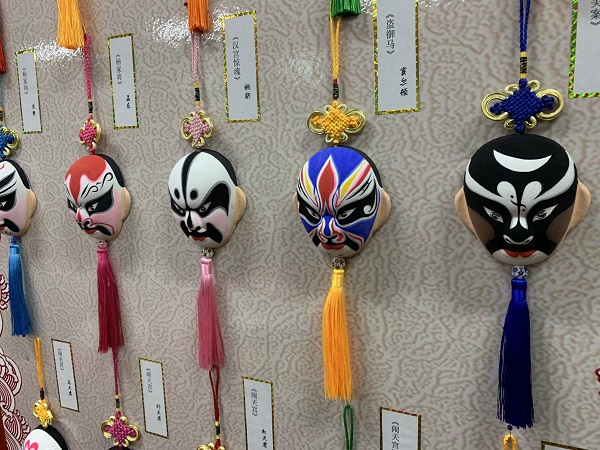 This photo shows five facial makeup masks. The masks displayed at the venue are made by Zhang Ming, a master of facial makeup. He combined the craftsmanship of Beijing Opera's painted faces with the production of Beijing Opera's helmet heads. He has added gorgeous and exquisite helmet heads, and making the simple face art form even more complete and more expressive. (Produced by Yan Yiqiao, Wang Xiangyu, Zhang Jian and Zhu Yurou)