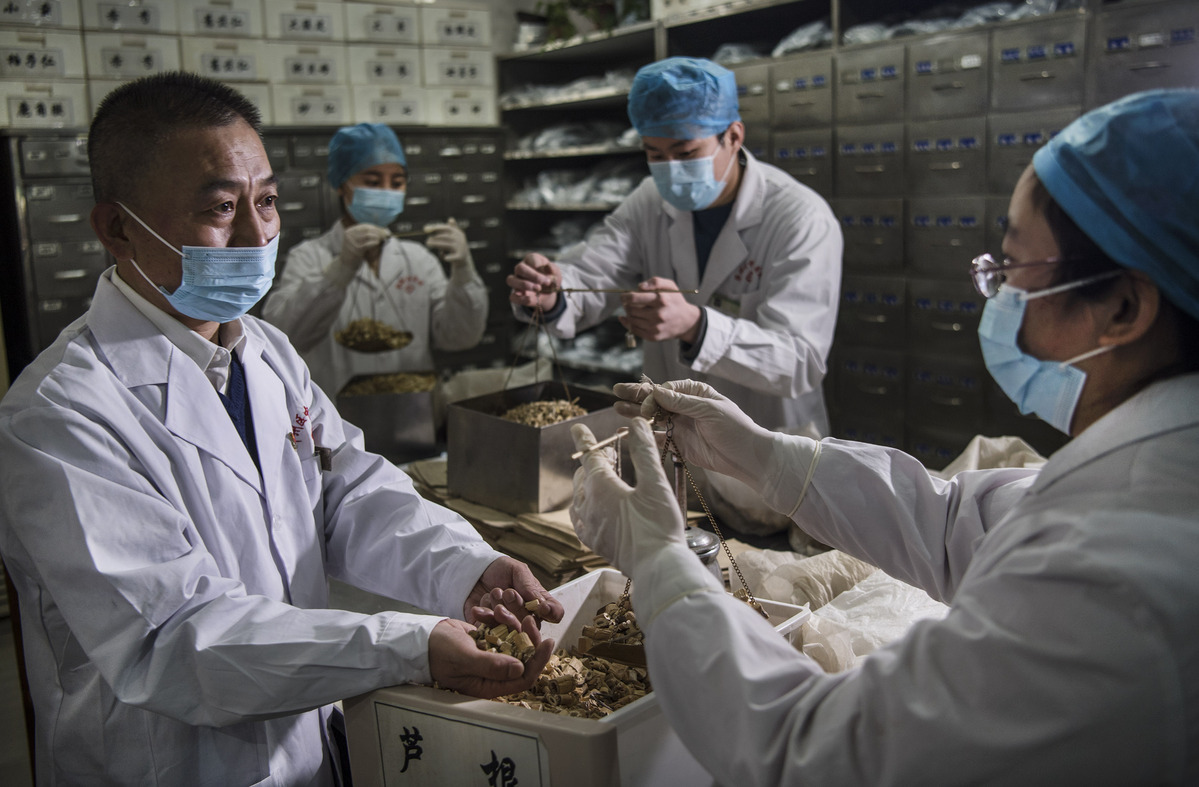 Traditional Chinese medicine is making a major contribution to preventing patients with novel coronavirus pneumonia becoming critically ill, according to a leading expert.

TCM helps alleviate fever symptoms in both the respiratory and gastrointestinal tracts and controls the development of the disease, said Lu Hongzhou, Party chief of the Shanghai Public Health Clinic Center, where confirmed cases in the city are being treated.

"Through treatment with TCM, we have witnessed an improvement in the mental and physical strength of most patients and a shortened disease course, enabling many to recover quickly and be discharged from hospital," said Lu, who is also a member of the national team of experts treating the outbreak.

Since late January, when patients with the disease were first admitted to the clinic center, the Shanghai Administration of Traditional Chinese Medicine Clinical Center has sent more than 10 TCM doctors to work round-the-clock on wards to prescribe therapies to patients, Lu said.

"More than 90 percent of the patients who have been discharged have undergone TCM therapies, and all those in the wards are also being given such treatment," he said.

As of Wednesday, the proportion of patients cured and discharged in Shanghai reached 88 percent.

"For the first time, four patients who had been in a critical condition were discharged on Feb 22, and the proportion of those either critically or severely ill in the city has remained at a relatively low level compared with the national average," Lu said.

Experts believe this is closely related to the role played by TCM doctors, who examine patients at the bedside and administer Chinese patented drugs and herbal remedies.

Lu cited the example of two critically ill patients who had fever and constipation. They were given a number of Western anti-inflammatory drugs, but these were ineffective. TCM doctors then decided to prescribe herbal remedies, which quickly reduced the patients' fever.

Xu Guihua, a TCM doctor from Shuguang Hospital Affiliated with the Shanghai University of Traditional Chinese Medicine, who specializes in respiratory diseases, said about one-third of patients with novel coronavirus pneumonia in the city experience different degrees of abnormal liver function. However, their conditions improve significantly with the use of TCM.

Xu, who is working at the Shanghai Public Health Clinic Center, said the condition of one female patient with the disease improved after she was treated for more than a week with a number of Western medicines, but she experienced impaired liver function.

Doctors decided to stop treating the patient with Western medicines and used herbal remedies to stimulate the function of her lungs, liver and spleen. Checks showed that the her liver was functioning normally again after two days and there was a clear improvement in her overall condition.

She was subsequently discharged and doctors prescribed herbal remedies for another 14 days.

On Feb 15, a team of 122 TCM doctors from Shanghai flew to Wuhan, Hubei province, the epicenter of the outbreak, to use their experience in combining Western medicines and TCM to treat patients with novel coronavirus pneumonia. The team is caring for those who are critically ill at Leishenshan Hospital.

Fang Bangjiang, a doctor from Longhua Hospital Affiliated with the Shanghai University of Traditional Chinese Medicine, is one of those sent to Wuhan.

He told Shanghai Radio:"The disease first attacks the immune system, or qi, the energy that flows through the body. Experience over the years has shown that a good combination of Western medicines and TCM has been an advantage in combating infectious diseases in China."

The Shanghai team took TCM therapies to Wuhan for patients with and without fever. The therapies focus on dispersing heat and toxicity, clearing the lungs and stopping coughs.

A team of medical professionals specializing in the treatment of different diseases has also played a pivotal role in the fight against the virus in Shanghai.

Lu said the combination of doctors specializing in respiratory and infectious diseases as well as those from the fields of cardiology, gastroenterology and geriatrics had been vital in customizing treatment for patients and minimizing organ damage.

Shen Yinzhong, director of infectious diseases at the Shanghai Public Health Clinical Center, said the institution was strictly limiting the use of hormonal therapies and, when necessary, was following the principle of small dosage and short courses of treatment.