NEW YORK, June 24 (Xinhua) -- Learning Wuqinxi which imitates the moves of bear, tiger, monkey, deer and birds to promote health, listening to lectures on "harmony of the universe" from the world's top-grade Qigong masters, and sharing experiences and lessons of your daily exercise and training ... 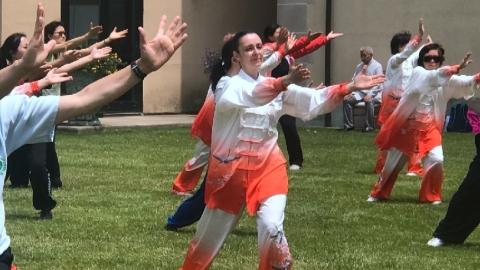 Doing all these things is a dream come true for American fans, practitioners and tutors of Qigong, a traditional Chinese exercise that aims at exploiting human body's inner energy to achieve both physical and mental harmony. More amazingly, they don't even have to go to China for this, as it is just happening right here in Long Island, New York.

With the 2018 Eastern U.S. Health Qigong Tutors Training Camp launched this weekend, some 100 participants have traveled all the way from New York, New Jersey, Connecticut and even California to attend.

On this bright and sunny Sunday afternoon, they gathered on the lawn of the picturesque Oheka Castle Hotel & Estate in eastern Long Island to learn some new movements from Qigong Master Wang Xiaojun, who is also a professor and postgraduate tutor with the Beijing Sport University.

"It's tremendous to learn the six new movements today from Master Wang, which are bringing your body to stretch in different directions that you haven't done before," said Marc Santiago, a retired school teacher from New York City, during a short break.

Santiago, who has been learning and practicing Taichi (the Chinese shadowboxing) and Qigong at a Long Island facility for about four years, told Xinhua that he was "very happy" as such training helped improve his health, balance and strength, which means "my kids don' t have to worry about taking care of me when I get old."

He was echoed by Olivia Rosenkrantz, a tap dancer living in Manhattan who has been studying Qigong and Taichi for about three years. "It's helping me a lot with my body, with tension, and also with my mind," she noted.

"Today we studied here something that I will definitely keep practicing," said the dancer, adding that she would also share the new skills with her boyfriend, who is also practicing every day with her.

For Sherley Chock, a practitioner and tutor from the Connecticut-based Aiping Taichi Center, the training camp is a boon not only for herself, but also for her 70-plus American students. In her career, Chock only got the chance to visit China once in 2006 on a brief exchange and training program.

"I' m so fortunate to be here to learn from the masters the new skills of Health Qigong," said the young American-born Chinese who first studied in the Taichi Center and later became its owner. "I'm very excited to bring it back to school because more and more students, after learning about the health benefits of Taichi and Qigong, want to try it."

"Health Qigong is easy to learn and fun to practice, so it gets popular in many parts of the world," said Professor Wang of the Beijing Sport University. "This is my fourth trip to New York in recent years, and every time I was impressed by the great improvements of the American practitioners and tutors, not only in their skills but also in their understanding of the Chinese culture and philosophy."

Similar to Yoga of India, Qigong has a long history that extends back several thousand years. And it is believed to have embodied the ancient Chinese wisdom of "harmony between nature and man" as well as "unison of body and mind."

According to Wang Jianjun, head of the delegation of the Chinese Health Qigong Association, there are approximately 6.5 million Qigong practitioners in the world today, including some 2.5 million outside of the Chinese mainland.

There are currently some 50,000 Qigong and Taichi lovers and practitioners in more than 20 states across America, estimated Lynn Xu, a veteran tutor with the Sitan Taichi & Martial Arts center of New York.

The exercise is still gaining popularity among people of all ages and all ethnic groups, as indicated by the rapid growth of the number of students enrolled with the Sitan center - from a mere 6 in 2007 to over 200 today.

"It's so beneficial for your mind and your physical health, that it's definitely something you want to share with your friends and others," said Rosenkrantz, the dancer.

"People become interested when they see me and say, 'hey, look at this guy, he is stronger, he looks younger.' Their experience of me helps them get involved more," he elaborated.