CULTURE Treasures give glimpse of civilization at the crossroads

Treasures give glimpse of civilization at the crossroads 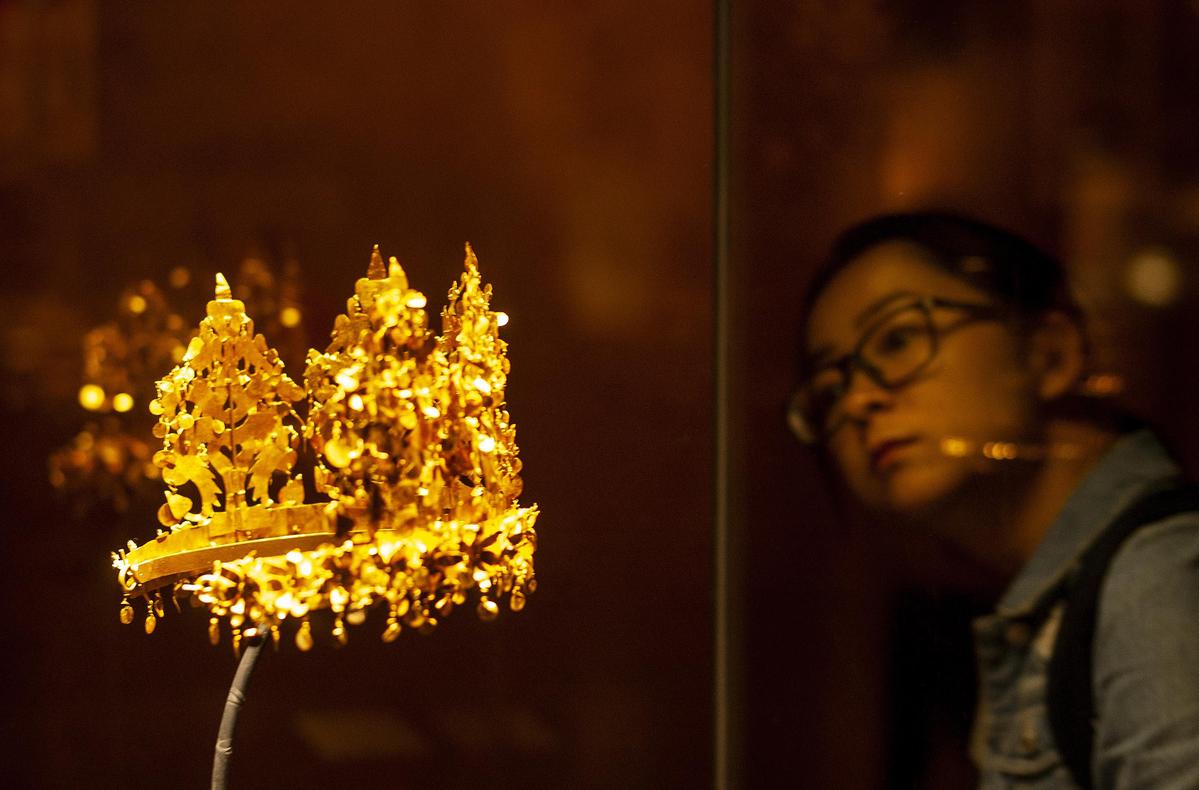 A visitor takes a closer look at a gold crown on display in the Utensils and Ornaments Endlessly Fine exhibition held at Tsinghua University Art Museum. (Photo: China News Service)

Since March 2017, more than 200 artifacts from the National Museum of Afghanistan, in Kabul, have been touring China to offer a portrait of a civilization standing at the crossroads of East and West.

To mark the first Conference on Dialogue of Asian Civilizations to be held in May in Beijing, this assembly of archaeological treasures is now on show at Tsinghua University Art Museum. Entitled Utensils and Ornaments Endlessly Fine, the exhibition was unveiled on April 18 and runs through June 23.

The Afghan artifacts include bronze objects, gold jewelry, limestone architectural components, glassware and ivory plaques, all vivid evidence of the diverse history of a landlocked country that once played a significant role in cultural interchanges between civilizations on the Eurasian continent.

Du Pengfei, deputy director of Tsinghua University Art Museum, said the treasures offer glimpses into the decline and revival of a region and its civilization, showing people the power of cultural interchanges and communication.

"Also, it inspires us to reflect on how we should view history, as well as our culture and that of others. It reminds us of the importance of an attitude of tolerance, an open mind, mutual learning and shared development," he says.

The objects came from four archaeological sites across Afghanistan, including Tepe Fullol, a northern village where gold and silver dating to the Bronze Age was found by local farmers in 1965. They were cut into uneven pieces for sale, and staff members of the National Museum of Afghanistan managed to retrace several of them. Some of these broken gold pieces that bear geometric and animal patterns are on show.

The exhibition also shows artifacts unearthed from the ancient ruins of Ai Khanoum, a city founded around 280 BC and destroyed by nomadic invaders around 145 BC. Decorative bronze and limestone components of architecture, human figurines and sculptures of deities demonstrate a distinctive influence of the civilization and culture of ancient Greece.

There are also objects excavated from several tombs of Tillya Tepe, dated to the early first century AD and earlier. The treasures include Rome coins, Greek figurines, Chinese bronze mirrors and silk, Indian ivory carvings and glassware from Syria or Egypt. The unique cross-cultural features show Afghanistan's status as an international, creative and diverse civilization along the ancient Silk Road.

Ivory, pottery and colored glass cups found in the ancient site of Bagram stand as examples of artistic sophistication, booming trades and a flourishing of Buddhist thought during the height of the Kushan Empire in the second century AD.

According to Mohammad Fahim Rahimi, who directs the National Museum of Afghanistan, the exhibits came from archaeological discoveries made before the former Soviet Union's invasion in 1979, and they survived the war by being secretly safeguarded in the vaults of the Afghanistan Central Bank, until they were uncovered again in 2003.

The collection of objects began a world tour in October 2006, and have since been exhibited in more than 20 museums across Europe, North America, Australia and East Asia.

"Only one percent of the archaeological sites in Afghanistan have been excavated, from which the objects unearthed form the basis of the national museum's collection. We look forward to further excavations after the situation becomes more stabilized and also intensified international cooperation," Rahimi said.

The exhibition will travel to Nanjing Museum in Jiangsu province after the Tsinghua leg.