CULTURE Treasures of the past

Treasures of the past 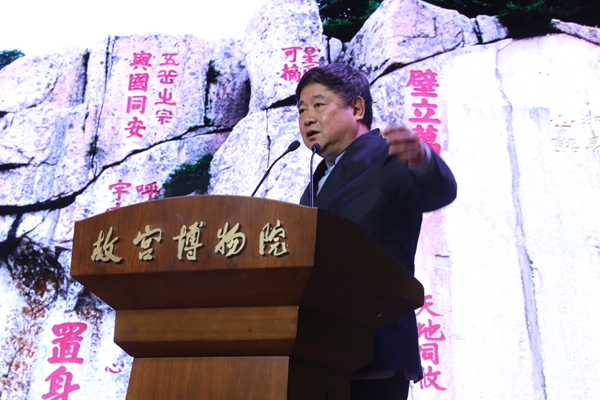 A two-day academic symposium as part of the third annual ministerial meeting of the Ancient Civilizations Forum was held at the Palace Museum in Beijing last week.

The forum, organized by the Ministry of Foreign Affairs, the Ministry of Culture and Tourism, the National Cultural Heritage Administration and other national-level institutions, attracted delegates from China and 15 other countries, such as Egypt, Greece, Peru and Iraq. The delegates spoke of the relevance of ancient civilizations in the modern world and shared their experiences in heritage conservation.

"Each ancient civilization is rooted in its own soil and has provided its unique wisdom to people," Zhang Xu, deputy minister of culture and tourism, said at the symposium.

He says there is a need to learn from one another as globalization and cultural diversity have deepened in the digital era.

"The protection of cultural heritage within one country has become inalienable from the big picture of the international community, and China is taking more responsibility in this process," Zhang says.

The symposium discussed three main topics-differences and similarities among the world's ancient civilizations, ancient cultural heritage and its continuation and evolution in modern culture, and the ancient Silk Road as seen through the lens of archaeology.

Many fresh ideas emerged from the perspectives of different world cultures.

Peking University professor Gong Yushu, who participated in the symposium, says the ancient Sumerians of Mesopotamia had a concept similar to that of the Tao, a concept describing the rules of the universe in Chinese culture. This discovery was made by analyzing texts on Sumerian tablets.

Huang Yang, a professor at Fudan University in Shanghai, and Despina Zernioti, director of the Corfu Museum of Asian Art in Greece, says they analyzed the shared social values of ancient Chinese and Greek people in the infancies of the respective civilizations.

According to M. Wali Ullah, director of the directorate of archaeology and museum in the Pakistani province of Khyber Pakhtunkhwa, all major early civilizations in the world relied on agriculture and had large-scale urban construction and developed belief systems. Nevertheless, each featured its own characteristics.

"It's a philosophical approach to look for similarities among ancient civilizations, and many new perspectives have emerged as a result of the discussions," says Guo Xiaoling, director of the academic committee of the Capital Museum in Beijing, who hosted a panel discussion at the symposium.

"Each scholar is an expert in their own field, but each one also has limitations in their maps of knowledge. That's why this exchange of ideas matters," Guo says.

Cross-border studies not only benefit academia but also contribute to society as a whole.

Chankillo, the 2,300-year-old remains of an observatory in Peru, has been nominated by the country for entry into the list of UNESCO World Heritage sites in 2020.

Ivan Ghezzi, director of the site's archeological project, did comparative studies between Chankillo and the Chinese ruins of Taosi, where a 4,000-year-old observatory was unearthed, and says he expects such studies will add value to the bid.

Some delegates at the symposium also spoke of the urgency of joint efforts to fight the theft and illegal trade of cultural relics, and to better protect heritage.

"Cultural heritage is threatened by many things, the most dangerous of which is its conversion into a commodity," says Hany al-Tayep, supervisor of the scientific office of the Egyptian Ministry of Antiquities.

"I am therefore using this forum as an opportunity to ask all countries in the world to join forces in condemning such trade, for each country is the worthiest of its own heritage," he added.

The fourth edition of China's Taihe Forum was also held congruently. It was launched by the Palace Museum in 2016 to enhance understanding of ancient cultures and improve coexistence among different civilizations. It is named after Taihe Dian, or the Hall of Supreme Harmony, the highest structure at the Palace Museum, which was China's imperial palace from 1420 to 1911.

"Through discussion, we find that ancient civilizations didn't entirely originate from one root but, rather, based on communication and a mixture of cultures," Lou Wei, deputy director of the Palace Museum, said at the Taihe Forum last week. "Every brilliant ancient civilization contains the shared treasures of human wisdom."

He says mutual understanding among civilizations should move beyond culture.