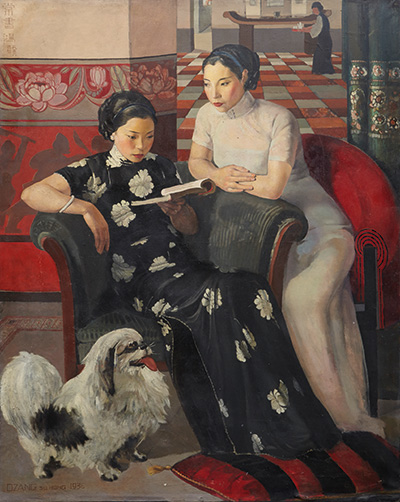 Two Sisters in the Parlor, an oil painting by Chinese artist Chang Shuhong, is on show at Pioneering: Chinese Artists Abroad in France and Chinese Modern Art (1911-1949) at the Long Museum in Shanghai.(Photo: China Daily）

An ongoing exhibition at the Long Museum (West Bund) in Shanghai reflects how 20th-century Chinese artists who studied abroad have had a strong influence on modern Chinese art.

The exhibition, Pioneering: Chinese Artists Abroad in France and Chinese Modern Art (1911-1949), opened on March 16 and will run through June 9 at the museum located in the West Bund cultural hub on the western bank of the Huangpu River.

Supported by the China National Arts Fund of 2018 and jointly hosted by the Central Academy of Fine Arts, the CAFA Art Museum and the Long Museum in Shanghai, the event showcases over 160 works by more than 40 artists.

According to the organizers, more than 40 of the exhibits came directly from the collection of the Long Museum, while the other 120 artworks were borrowed from nearly 40 public and private institutions and individuals.

The exhibition first opened at the CAFA Art Museum in Beijing from Jan 12 to March 3. After the showcase in Shanghai, the exhibition will be held in the Chongqing and Wuhan branches of the Long Museum.

Since the beginning of the 20th century, around 100 artists from China have traveled to France in pursuit of their dreams, says Zhang Zikang, director of the CAFA.

"The impact they had was unparalleled in Chinese art history. They brought back systematic methods for art education and, more importantly, ignited a passion and idealism for revitalizing Chinese art," he says.

Guo Hongmei, the executive curator of the show, says the first Chinese students to study art in Europe registered at Ecole Nationale Superieure des Beaux-Arts in Paris, or the National High School of Fine Arts, in 1911.

"Of the 100 Chinese artists who studied in France, we picked the most important ones who made the greatest impact on Chinese art history during the 20th century, and inspired more people to take an interest in the study of Chinese art in the early 20th century," she says.

Artists such as Xu Beihong, Lin Fengmian and Liu Haisu learned about classical, realism and naturalism at art academies in Europe. They later introduced artistic genres such as oil painting, sculpture and drawing as well as other new ideas to Chinese art that were then still limited to calligraphy and painting. It was also this group of artists who founded, developed, changed and enriched Chinese art during the first half of the 20th century.

Guo says the early 20th century was a time of exploration in the global art scene and these Chinese artists were inspired by the modernist ideas which fueled their pursuit of the classical, realist and traditional methodologies of the Western art world.

She says in search of artistic direction, many artists revisited their connections with Chinese philosophy, aesthetics and art.

Wang Wei, the director and co-founder of the Long Museum, says oil paintings by Chinese artists from the early 20th century are one of the earliest and most important works in the museum's collection.

"It was because of them that China's art scene went through unprecedented changes, and stepped into an open and diverse modern period," Wang says.