On his knee, swinging left-handed under a bush with the clubhead upside down to dig the ball out of dirt and leaves, Tiger Woods knocked it to 5 feet to save par. 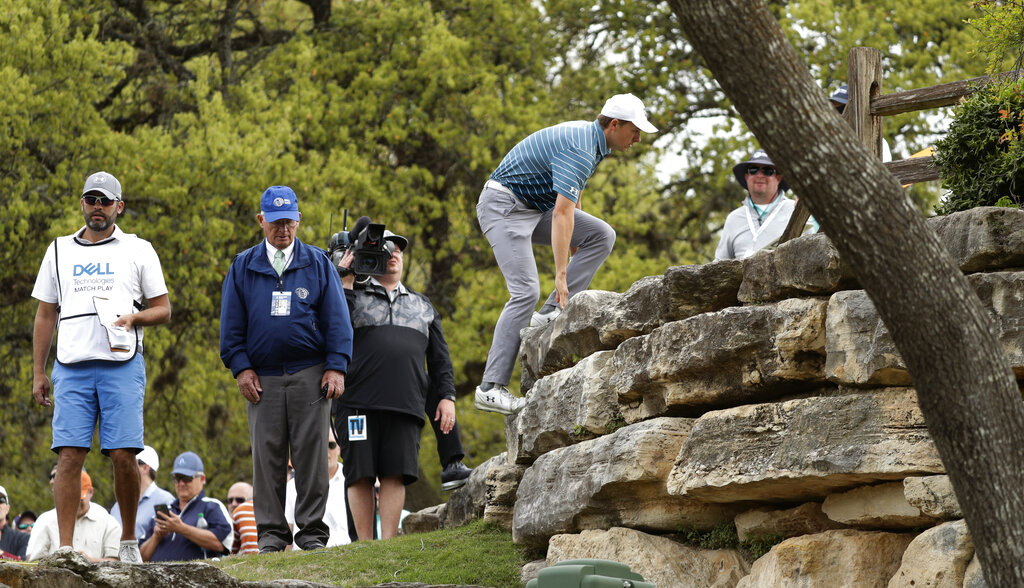 Jordan Spieth climbs rocks to get a better vantage point after an errant drive on the third hole during round-robin play at the Dell Technologies Match Play golf tournament, Thursday, March 28, 2019, in Austin, Texas. (Photos: AP)

That used to be the kind of shot that would take the fight out of opponent and push Woods to a win.

Not so much anymore.

Despite nailing the trickiest of shots, Woods still couldn't muster enough good ones down the stretch to beat Brandt Snedeker on Thursday in the second round of pool play at the Dell Technologies Match Play.

The shot was also emblematic of Woods' first two days at a tournament he hasn't played since 2013. He's been a bit all over the place.

"I thought he was wasting his time over there. It's just the kind of stuff he pulls," Snedeker said. "Nobody else would probably even try to hit it . ... I told him on the next tee, I'm might have rethink how I do match play, because I played that second shot according to you being in the junk. And I actually had a harder par it turned out than he did."

The startling recovery on No. 10 kept Woods within striking distance, but he pulled his iron off the No. 13 tee too far left of the riverside fairway at the Austin Country Club.

Woods took a double bogey and Snedeker won with a bogey for a 2-up lead. Snedeker closed out the 2-and-1 victory on the 17th green.

Woods is the No. 13 seed in the 64-player field and has to beat No. 18 Patrick Cantlay on Friday to have any chance of advancing to the weekend elimination rounds. Even if he beats Cantlay, Snedeker could eliminate Woods by beating Aaron Wise.

"All I can do is hopefully get a point tomorrow and see if that's good enough," Woods said.

For the third straight year, the defending champion was eliminated by Thursday.

Bubba Watson went down early, losing 2 and 1 to Billy Horschel in one of the day's early matches. Watson had lost his opening match to Kevin Na on the final hole when he failed to get out a greenside bunker and snatched his ball while it was still moving to concede the match.

Watson still has an important match to play Friday when he goes off against local favorite Jordan Spieth, who is still in contention for the weekend.

The tournament has not been kind to defending champions since it moved to Austin in 2016.

Jason Day, the 2016 winner, withdrew before the start of the 2017 tournament to be with his ill mother. Dustin Johnson won in 2017 and was routed in his first three matches in 2018.

"We've known each other for over 30 years now," Furyk said. "Our wives are good friends. Our kids are friends."

Thursday produced some wild rounds with near collapses and a big save.

In his match against Kevin Na, Spieth hit a wild drive on No. 3 that went so far right it hit a sign on the tee box to adjacent hole. He then ripped off consecutive birdies, eagled the par-5 sixth and was 6 up with six holes to play.

Spieth then bogeyed two of the next three holes and a quickly cut the deficit to three. The pressure was mounting until Na missed a birdie putt on No. 16 that left Spieth wiping his brow in relief.

That finish came after Spieth had to win two of the final three holes Wednesday to tie his opening match with Billy Horschel.

"I'm playing under pressure more often in this tournament than I would be on a second round of a regular event because you feel like it's you have to beat that guy or you go home," Spieth said.

Lee Westwood was in complete control of his match with Rafa Cabrera Bello at 4-up with seven holes to play. Westwood then played the next six holes four-over and was 1-down heading into the final hole. He saved a half-point from the match with a birdie on the final green.

"I don't know if you call it justice on the last. It's more luck than judgment on the greens for me," said Westwood, ranked No. 62 of 64 players. "But I've hardly been playing coming here. I don't practice when I'm at home, so I can't really expect anything different."

Jon Rahm was 6 down through 10 holes before he won four in a row. But his putt to win the 15th grazed the lip, and his 3-wood into the par-5 16th was too strong and went into a back bunker. J.B. Holmes eventually won on the 17th hole.