CULTURE Trinbagonian writer shows love for China in her books

Trinbagonian writer shows love for China in her books 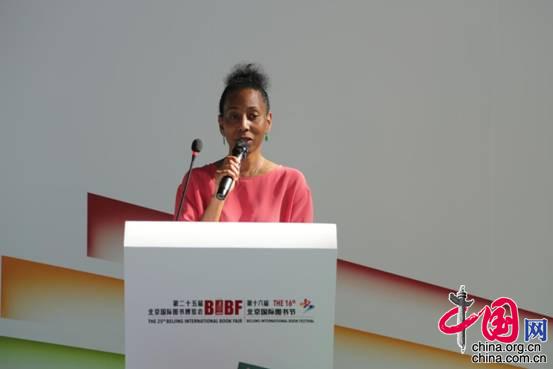 Lisa Sankar, a woman from Trinidad and Tobago who has been married to a Chinese man for nearly two decades, has fulfilled her Chinese dream as a writer and entrepreneur.

“Although I am an adult, deep inside, the child in me lives on, and there are so many stories in me waiting to be told. My children are grown, so I have decided to tell all my untold stories to the children of China and to the children of countries around the world”, said Sankar at the launching ceremony.

Sankar explained that people could find Chinese elements in her stories. For instance, the company that Harvey Hippo’s father works for does business with a Chinese company. The owner of the Chinese company is a panda, who has a young son. In the books, Harvey Hippo is set to meet and become friends with the young panda.

The three books in the “Fabulous Stories” series are based on particularly amusing stories Sankar originally told her two sons.

Stephen Seedansingh, Ambassador of the Republic of Trinidad and Tobago to China, said that Sankar has distinguished herself by being the first Trinbagonian author of children’s books written and published in Mandarin for a Chinese audience.

According to Seedansingh, cultural and creative industries are important contributors to economic resilience in Trinidad and Tobago, creating sustainable economic opportunities for people from all walks of life.

“Creatives like Lisa and those involved in the creation, production and distribution of cultural goods and services earn significant benefits in regional and international markets,” he noted.

Denis Antoine, Ambassador of Grenada to China, pointed out that there are many ways to enlarge a child’s world, but a love of books is still the best way. He said Sankars work fully displays her love for China.

Sankar is a writer with unbridled imagination. In 1996, she received a Chinese government scholarship to study in China. She was the first student of Trinidad and Tobago to obtain a Chinese degree. The fusion of oriental and Caribbean culture makes her literature full of vitality and charm.

In 2010, Sankar published her first book, “The Emperor, His Bride and the Dragon Robe.” It is an original Chinese fairy tale picture book which tells the story of a young Chinese emperor and two young women who vie to become his bride and the next empress of China.

“I believe that reading is a child’s ladder to success. It is my wish that through my books, I can bring joy and hope to children, and at the same time help broaden their horizons,” said Sankar.