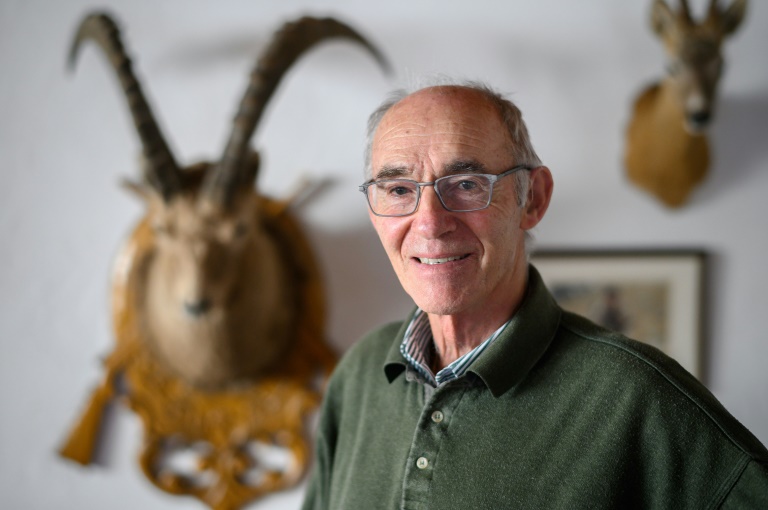 Narcisse Seppey sees nothing wrong with the canton making money on the planned cull of older, weaker ibex. (Photo: AFP)

A woman wearing a bright orange vest aims her rifle and on her second shot, a large Alpine ibex with majestic curved horns collapses in the snow.

Olivia Opre is one of many wealthy foreigners to travel to the southern Swiss canton of Wallis, having paid large sums to shoot the protected species of wild goat and take the horns as a trophy.

But the recent RTS documentary brought the trophy hunt to the attention of the broader public, sparking a heated debate about the practice and its potential impact on the viability of the species.

The regional parliament will soon debate whether Wallis, the only Swiss region to permit this type of hunting, should continue doing so.

But hunters and cantonal authorities insist the issue has been misrepresented.

They argue that regulating the ibex population by strategic culling has allowed it to grow steadily in recent years.

The entire Swiss ibex population was wiped out at the end of the 19th century, but since they were reintroduced from Italy the population has grown to around 17,000 here.

"The ibex culls are motivated by ethical and biological considerations," the office of Wallis environment minister Jacques Melly told AFP in an email.

Animals across all age groups and of both sexes can be listed for culling, but males over the age of 11 -- nearly 60 of them in 2018 -- are typically offered to trophy hunters, at a price.

The canton pockets hundreds of thousands of dollars in income from this hunt annually.

Narcisse Seppey, who was head of the Wallis wildlife service when the trophy hunts began in the 1980s, told AFP he saw nothing wrong with the canton making money on the planned cull.

The older animals were placed on the list when they began looking weaker or sick, he said.

"They would die the next winter anyway," the 77-year-old hunter said, standing in front of a large pair of ibex horns mounted on the wall in his private hunting trophy museum in the small village of Vex in the Swiss Alps.

A number of international travel agencies dedicated to trophy hunting worldwide offer trips to Wallis. A guard with the cantonal hunting authority accompanies foreign hunters and points them to the specific animal their permit covers.

Seppey stressed that no ibexes are added to the Wallis cull list without federal government approval. Trophy hunters often waited years to obtain their permit, he added.

"What is smarter: to push people into illegal poaching, or ensure that the high cost of a pair of interesting horns can go into the cantonal coffers?" he asked.

But conservationists question the need to regulate the Alpine ibex population at all, since they cause little damage to crops and forests. They also worry about the sustainability of targeting large numbers of older males.

Female ibexes typically prefer mating with older males which have the longest horns -- a signal of genetic superiority.

"If you systematically cull the old males from the population, ... you might disrupt the mating system," Raphael Arlettaz, a biologist at the University of Bern, told AFP.

Arlettaz acknowledged there was not yet scientific evidence demonstrating negative biological effects of culling older males, but said he believed the results could be "catastrophic".

He said he had launched a research project to study the issue, with preliminary results expected within a year or so.

Hunters in Wallis say there is no question that older males are important to ibex reproduction, but they insist that after around 12 years of age they are too old and weak to reproduce.

"After that, they are no longer important" to reproduction, said Daniel Kalbermatter, head of the Wallis hunting society which counts some 5,500 members.

He told AFP he was not opposed to the trophy hunt, welcoming the cash it brings in, which goes in part to subsidise local hunting permits.

But he stressed that the practice "is not really hunting", since ibexes are quite calm and easy to approach.

"It's not good for the image of hunters."