Although Mike Trout has reached base in every game he has played this season, he realizes his typical production lacked some of his usual pop and potency in April. 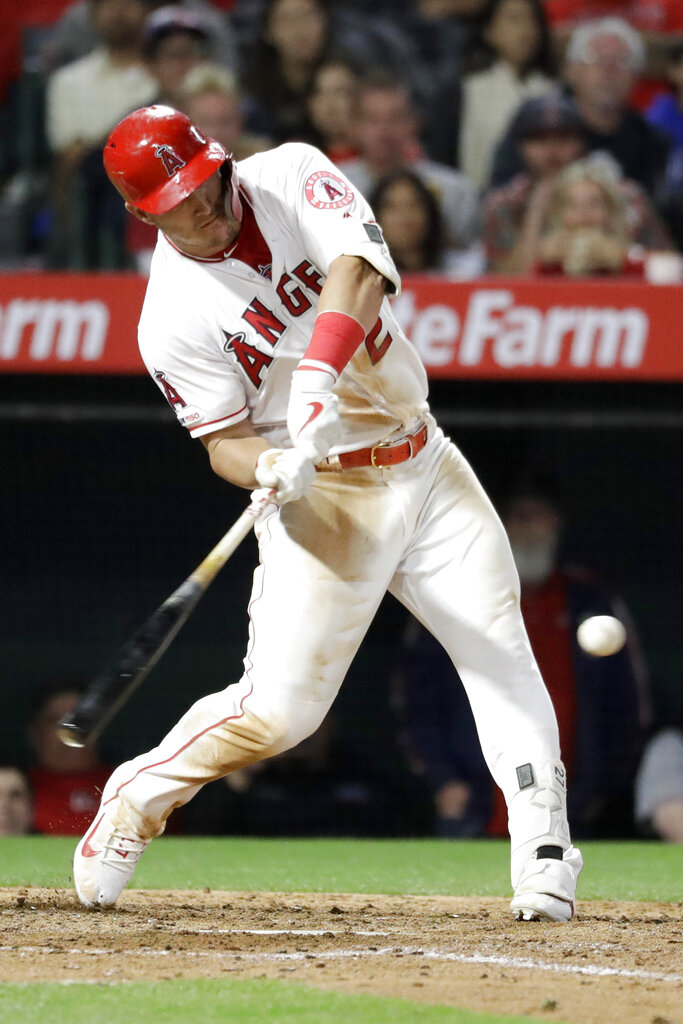 Los Angeles Angels' Mike Trout hits a three-run double against the Toronto Blue Jays during the fourth inning of a baseball game in Anaheim, Calif., Wednesday, May 1, 2019. (Photos: AP)

So the superstar started off May with a big-time hit that propelled the streaking Los Angeles Angels to another win.

Trout delivered a three-run double and Albert Pujols added his 1,998th career RBI in the Angels' fifth victory in six games, 6-3 over the Toronto Blue Jays on Wednesday night.

Trout's bases-clearing drive in the fourth chased Marcus Stroman (1-4) and punctuated the latest strong performance by the up-and-down Angels, who had lost nine of 10 before their current surge out of last place in the AL West.

After Tommy La Stella drew a bases-loaded walk, Trout drilled his double past Vladimir Guerrero Jr. at third base. The two-time AL MVP played through a minor injury problem last month, and his double was just Trout's fifth extra-base hit since April 7 — a bit of a power drought by Trout's peerless standards.

"I think my last week or two, I really started to feel better at the plate," Trout said. "I went through a couple of games where I just felt something off, but I've just got to keep trying to get back to the way I was, and so it was good to see that ball go through."

With a first-inning single, Trout also set a franchise record by reaching base in his 28th consecutive game to start the season, topping Darin Erstad's 27 straight in 2000.

"That's why he's such a great hitter," Angels manager Brad Ausmus said. "Even when he's not necessarily making his best contact, he's still on base and allowing guys to drive him in."

Randal Grichuk and Rowdy Tellez homered for the Blue Jays, who had won nine of 12 before losing the first two in this three-game series.

"I didn't have a great feel, but it was just a weird night," Stroman said. "A lot of weird things happened. I'm not even slightly worried about it. You're going to have games like this. Some of those ground balls could have gone right at guys."

After Luke Bard threw a perfect first inning as the Angels' opener, Felix Pena (1-1) retired his first nine batters. The right-hander still hasn't pitched longer than five innings this season, but he earned his first win in eight appearances since Sept. 12.

Bard is the fourth straight opener to throw a perfect first inning for the Angels.

"Pena came in and picked up where Bard left off," manager Brad Ausmus said. "Throwing a lot of strikes, getting a lot of swings and misses." 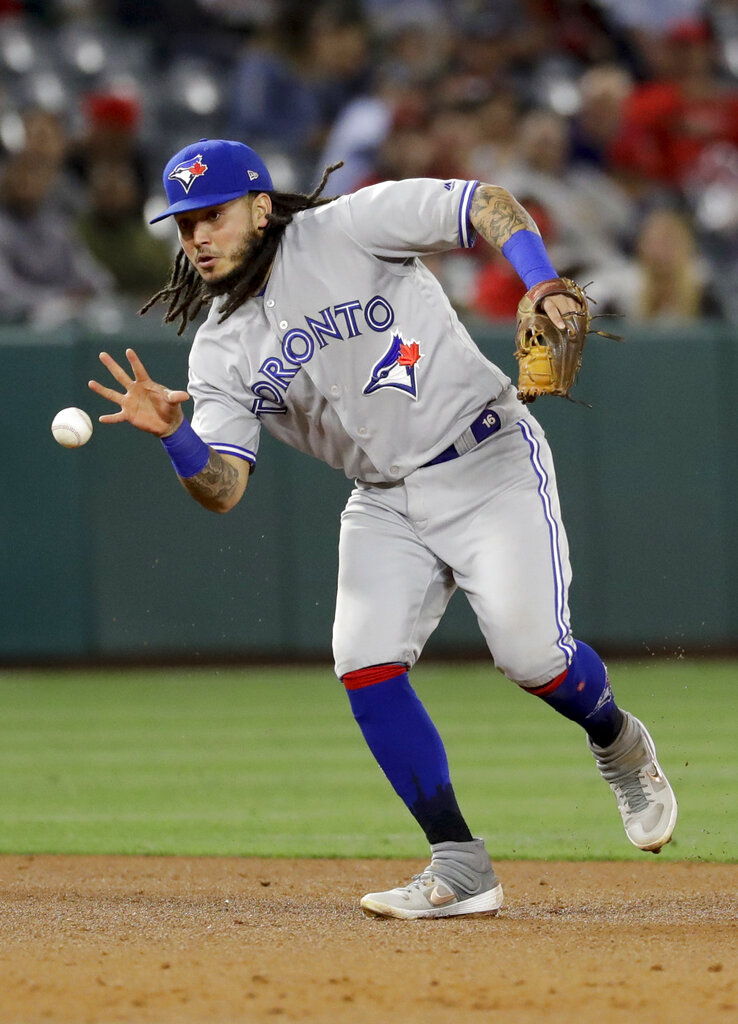 The 39-year-old Pujols no longer runs the bases with youthful abandon, yet he scored from first on Kole Calhoun's double and Billy McKinney's error in right in the fifth inning, even running through a stop sign from third base coach Mike Gallego.

Pujols drove in the Angels' first run with a long flyout in the first inning. The 19-year veteran is on the verge of becoming the third player with 2,000 RBIs since they became an official statistic, joining Hank Aaron and Alex Rodriguez.

Guerrero went 0 for 4 with two strikeouts in the second road game of his big league career at his father's longtime home ballpark. The 20-year-old prodigy barely missed his first career homer when his high fly to left only reached the warning track in the eighth.

Although Guerrero made a couple of sharp plays in the field, the third baseman also was given his first big league error when he failed to snag Pujols' chopper in the fifth. 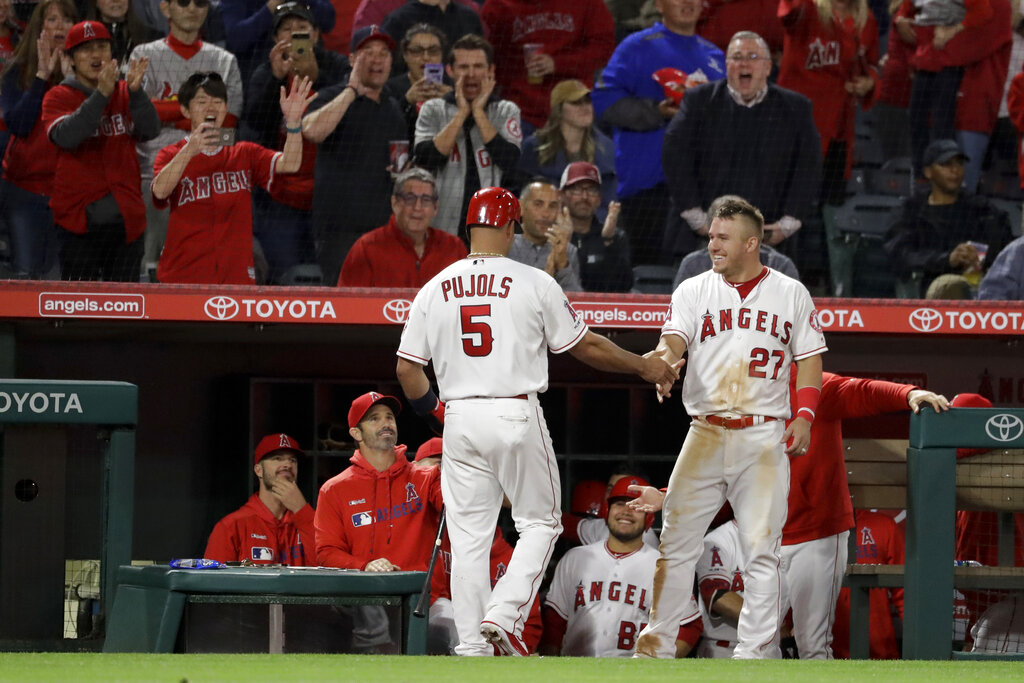 Los Angeles Angels' Albert Pujols returns to the dugout after scoring on a double by Kole Calhoun during the fifth inning of the team's baseball game against the Toronto Blue Jays in Anaheim, Calif., Wednesday, May 1, 2019.

Ty Buttrey got six outs for his first save of the season, retiring Freddy Galvis on a fly with two runners on to end it. Ausmus hoped Buttrey could grind his way to the end in a bid to save Hansel Robles and other relievers for Thursday.

Angels: Right-hander J.C. Ramirez is scheduled to face hitters Thursday for the first time since Tommy John surgery. He is expected back in June. ... Shohei Ohtani faced live pitching again in a simulated game. The AL Rookie of the Year could make his post-Tommy John debut next week.

Tyler Skaggs (2-2, 3.15 ERA) makes just his second home start of the season when the Angels go for the sweep. He faces Toronto's Aaron Sanchez (3-1, 2.32), who has never beaten the Angels in three career starts.