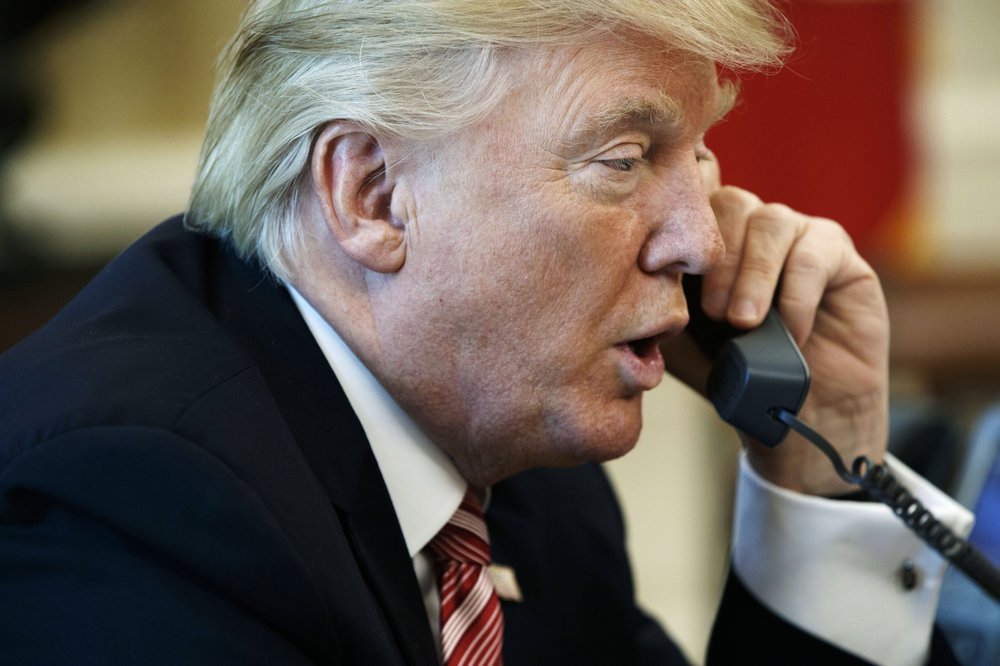 In this June 27, 2017, file photo, President Donald Trump talks on the telephone in the Oval Office of the White House in Washington. (Photo: AP)

President Donald Trump’s request of a “favor” from his Ukrainian counterpart, in a line that helped to launch the impeachment process, tops a Yale Law School librarian’s list of the most notable quotes of 2019.

Trump said, “I would like you to do us a favor, though,” in the now-infamous July 25 phone call with President Volodymr Zelenskiy.

The list assembled by Fred Shapiro, an associate director at the library, is an annual update to “The Yale Book of Quotations,” which was first published in 2006.

Also represented on the 2019 list are quotes from candidates running for president in 2020, the struggle over Brexit, and activist Greta Thunberg’s scolding of world leaders on climate change.

Shapiro said he picks quotes that are not necessarily admirable or eloquent, but rather because they are famous or particularly revealing of the spirit of the times. ____

1. “I would like you to do us a favor, though.” — President Donald Trump, memorandum of a telephone conversation with Ukrainian President Volodymr Zelenskiy, July 25.

2. “We are at the beginning of mass extinction. And all you can talk about is money and fairy tales of eternal economic growth. How dare you!” — environmental activist Greta Thunberg, speech at United Nations Climate Action Summit, New York, Sept. 23.

3. “When we’re dancing with the angels, the question will be asked: ‘In 2019, what did we do to make sure we kept our democracy intact? Did we stand on the sidelines and say nothing?’” — The US Rep. Elijah Cummings, closing statement at the public hearing of Michael Cohen before House of Representatives Oversight Committee, Feb. 27.

4. “I would rather be dead in a ditch” than ask the European Union for a delay in Brexit — U.K. Prime Minister Boris Johnson, remarks at the police training center in Wakefield, England, Sept. 5.

5. “The Prime Minister’s advice to Her Majesty was unlawful, void and of no effect.” — Supreme Court of the United Kingdom President Brenda Hale, Baroness Hale of Richmond, judgment in case of R (Miller) v. The Prime Minister, Sept. 24.

6. “If we had had confidence that the president clearly did not commit a crime, we would have said so.” — Special Counsel Robert Mueller, remarks at the Department of Justice, May 29.