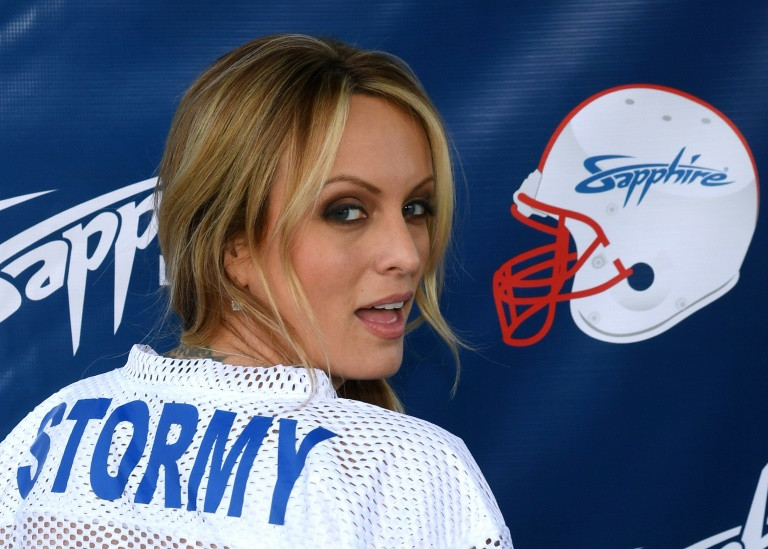 Long-time Trump attorney Michael Cohen said he was not reimbursed for the payment to the actress, whose real name is Stephanie Clifford and who goes by the stage name of Stormy Daniels.

Cohen told the New York Times, which first reported the story on Tuesday, that the payment was legal. He declined to give details such as why he made it, or if Trump was aware of the payment at the time.

"Neither the Trump Organization nor the Trump campaign was a party to the transaction with Ms. Clifford, and neither reimbursed me for the payment, either directly or indirectly," Cohen said, according to the Times.

"The payment to Ms. Clifford was lawful, and was not a campaign contribution or a campaign expenditure by anyone."

US media reports have said the payment was made one month before the November 2016 election to keep the liaison quiet.

Trump was a private citizen when the 2006 sexual encounter with Clifford allegedly took place.

He was married at the time and his wife Melania had given birth to their son less than four months earlier.

The payment was first reported last month by the Wall Street Journal. Cohen's statement to the Times marked the first time he acknowledged a role in what he termed a "private transaction."

Cohen's revelation comes after the watchdog group Common Cause filed a federal complaint in January arguing that the payout may have violated campaign finance rules.

Based on publicly available information, Common Cause said they have "reason to believe" that money was "an unreported in-kind expenditure ... because the funds were paid for the purpose of influencing the 2016 presidential general," the group said in their legal filing.

The alleged violation of federal campaign finance law "undermines the integrity of democracy in the United States," a letter signed by Paul S. Ryan of Common Cause reads.

Cohen told the Times that Common Cause's claims "are factually unsupported and without legal merit," and he has filed a response with the Federal Election Commission.

Trump, through his lawyers, and Clifford, 38, have both denied anything ever went on between them.

But last month the celebrity magazine In Touch published a 2011 interview with Clifford in which she expounds at length and in detail on their relationship and what she described as their "textbook generic" sex.

In that interview, Clifford said she met Trump at a celebrity golf tournament in 2006 and had a sexual encounter with him then.

She said she spoke with Trump on the phone or saw him in person for about a year.

The In Touch interview, which had not been published before, was conducted before Clifford's alleged signing of a secrecy agreement in October 2016.

Clifford has been taking advantage of her new-found notoriety.

In a recent appearance on the late night TV talk show "Jimmy Kimmel Live" -- right after Trump delivered his State of the Union address -- Clifford deflected questions about the alleged affair and whether she had signed a non-disclosure agreement.

"You're so smart, Jimmy," Clifford answered.

Later in the interview, Kimmel asks, "Have you ever made love to someone whose name rhymes with Lonald Lump?"

"I'll call you whatever you want me to call you, baby," Clifford responded.