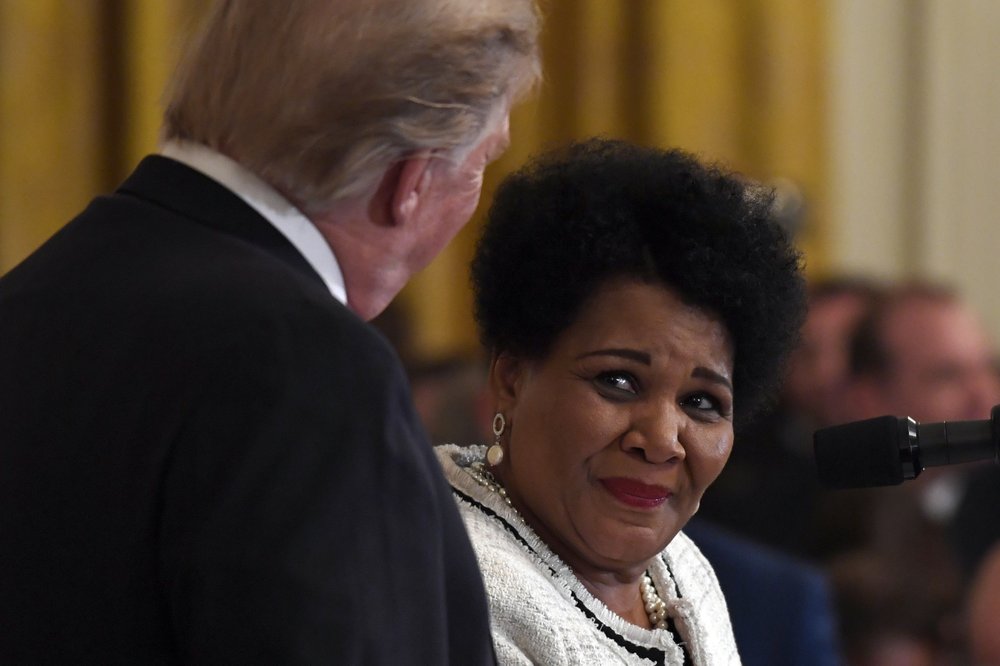 For the majority of people of color who believe Donald Trump is a racist unworthy of reelection, the Republican president can point to Alice Marie Johnson.

The 64-year-old African American great-grandmother spent 21 years in prison for a nonviolent drug offense before Trump commuted her sentence in 2018. She then became the unwitting star of his reelection campaign’s $10-million Super Bowl ad, which featured footage of Johnson’s emotional release from prison as she praised “Donald John Trump.”

“I’m an African American woman and he signed my paper. How could I turn around and say he’s a racist?” Johnson said in an interview this past week. “I believe in judging people by the things that they’ve done.”

As the next phase of the 2020 presidential campaign begins, Trump’s team is betting that his actions, more than his words, on issues such as criminal justice, education, and abortion will allow him to chip away at the Democrats’ overwhelming advantage with African Americans, Latinos, and women.

The high-stakes effort is backed by tens of millions of dollars, an expansive field program and a sophisticated digital operation aimed at peeling away even a narrow slice of the voters who make up the backbone of the Democratic Party’s political base.

Trump’s strategy is complicated by his leadership on the coronavirus pandemic that has taken a disproportionately devastating toll on minority communities. His divisive record on immigration and race is hard to overlook. He said there were “very fine people on both sides” of the deadly protests in Charlottesville, Virginia, in 2017 against white supremacists, and his administration has separated thousands of immigrant children from their parents at the Mexican border.

In an interview, NAACP President Derrick Johnson seized on Trump’s coronavirus response and the related impact on the African American community, predicting that the president’s inability to control the outbreak would “overshadow any other issue” this fall.

“Everything lies at the feet of the president,” Johnson said. “It’s not a partisan criticism, it’s a leadership criticism. This nation is lacking the leadership necessary to contain this pandemic so that Americans across all communities are safe.”

Recent polls show that a majority of Americans agree that Trump’s response to the outbreak has been too slow.

Trump’s campaign team concedes that the pandemic has temporarily derailed its plans. The campaign was forced to delay the previously announced opening of “Black Voices for Trump” offices in 15 black communities, for example, relying instead on a series of phone and online “real talk” sessions to engage black voters. This past week, the campaign hosted calls with people of color in Pennsylvania and Wisconsin.

On the calls, Trump’s team noted that his administration has sent hundreds of millions of dollars to historically black colleges and universities and that more than $1 billion was set aside for HBCUs and minority-serving institutions as part of Congress’ coronavirus response package.

In late 2018, Trump signed into law a criminal justice bill that has led to the release of thousands of prisoners. His campaign reports that 90% of prisoners whose sentences were reduced as a result of the bill are African Americans. Trump also used his presidential power to grant clemency to a handful of people of color such as Johnson, who caught his attention with the help of reality television star Kim Kardashian.

In the interview, Alice Marie Johnson shared her excitement about being able to attend family Christmases, Fourths of July and her first family wedding at the end of the year. She drove a car for the first time in more than two decades last week. She’s eager to defend Trump against the fierce criticism he usually gets from communities of color.

Johnson has lost the right to vote because she is a convicted felon, and she declined to say whether she would vote for Trump if she could. But she offered a rosy assessment of Trump’s reelection outlook: “He’s changed the minds of a whole lot of people with his leadership.”

Some Democrats fear she may be right.

The most powerful super PAC in Democratic politics, Priorities USA, and one of the party’s most powerful union allies, the Service Employees International Union, are pouring millions of dollars into separate campaigns to win over black voters. They quietly acknowledge that Trump opens the general election phase of the campaign with a significant organizational and digital advantage.

They also report anecdotal evidence and internal polling suggesting that Trump’s standing with younger black men, in particular, is rising.

Gallup found that Trump’s approval rating stood at just 15% with black voters and 24% with Latinos immediately after he took office in 2017. Last month, the polling organization reported his approval with the same groups at 17% and 33% respectively.

Even a tiny improvement for Trump with such groups could prove devastating in their fight to defeat him this fall.

Trump eked out the narrowest of victories four years ago, relying on strong support from white working-class men and evangelicals, while Democrats failed to energize their own base of educated liberals, African Americans and Latinos.

Should he fail to improve among black and brown voters, his aggressive outreach planned for the weeks and months ahead could help him expand his coalition in other ways.

Democrats who studied Trump’s Super Bowl ad with Johnson found that it tested better among white women than black voters. The president’s party has struggled badly among suburban women in a series of elections since he took office, but it has yet to develop a cohesive message or strategy to reverse the trend.

During a discussion about the campaign’s outreach to women, Lara Trump, the president’s daughter-in-law and a campaign adviser, noted that some of the president’s closest advisers are women. She also said he’s been fighting to protect “the sanctity of life” by opposing abortion.

Alice Marie Johnson has stayed in close contact with Trump’s team. She attended two White House events in the days before the coronavirus outbreak exploded, and said she’s not opposed to appearing in future ads.

“He’s very compassionate with families,” Johnson said. “I think that was why he put me in the Super Bowl ad — it was me rejoining my family.”

“I know that I touched his heart,” she added.