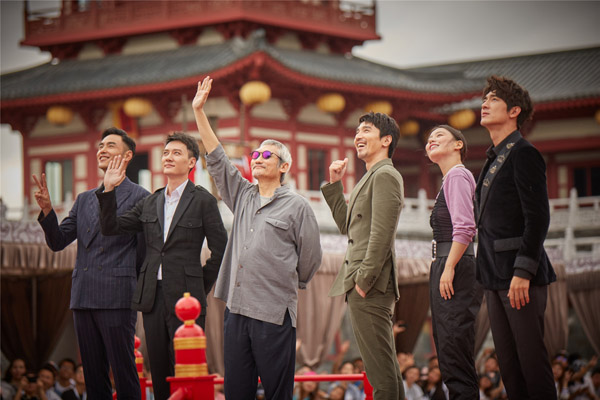 Director Tsui Hark (third from left) alongside cast members of the forthcoming fantasy film Detective Dee: The Four Heavenly Kings wave to a camera-installed drone during the film's premiere in Suzhou, Jiangsu province, on July 22. [Photo provided to China Daily]

Known for decades as the master of the visual feast, maverick director Tsui Hark is returning to our screens with his take on 7th-century China as the backdrop for his latest Detective Dee epic.

As the third installment of the franchise about the titular sleuth, Detective Dee: The Four Heavenly Kings will hit Chinese theaters on Friday.

Something akin to the Chinese version of Sherlock Holmes or Hercule Poirot, the role of Dee has been reprised by Taiwan actor Mark Chao, who faces off unprecedentedly powerful rivals in the new extravaganza.

Picking up from where Rise of the Sea Dragon left off, Tang emperor Li Zhi presents Dee with the dragon-taming mace, a token of supreme supervisory power that gives its owner the power to fend off anyone who covets the throne.

Regarding the gift as a threat to her ambitions to become the country's top ruler, the emperor's wife, Wu Zetian, assigns her top aide and a team of five sorcerers to steal the mace. But what instead unfolds is an even more thrilling conspiracy about an exiled rebel force from India which is plotting to take over the Tang empire. Wu is again played by award-winning actress Carina Lau.