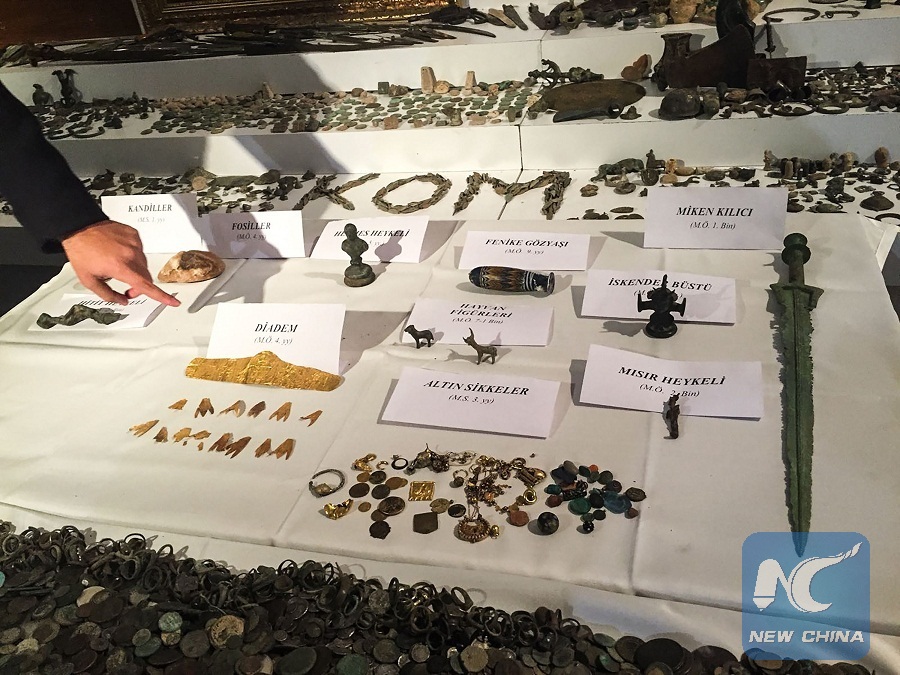 Turkish police confiscated thousands of historical artifacts in a giant operation against smugglers in Istanbul on December 21, 2017. Photo: AFP

Turkish police have seized tens of thousands of artifacts dating back to Anatolian, Greek and Egyptian civilizations in its largest operation to combat smuggling of ancient treasures in the past week.

Among the seized artifacts displayed on Thursday in Istanbul were a 3,000-year-old Mycenaean sword attributed to Achilles of Troy, a bust of Alexander the Great made upon the order of the ancient king during his India campaign, and a queen's crown adorned with golden leaves from the Hellenistic period.

Several fossils, as well as artifacts from Islam's early history in Anatolia, the cradle of many civilizations, were also seized.

During the major operation, police officers disguised as Arab tourists made contact with the chief of the smugglers who had a shop in Istanbul's Grand Bazaar, local media reported.

The historic Grand Bazaar, the world's oldest covered bazaar and a major tourist venue, was a trade hub during the Ottoman Empire with its construction dating back to the middle of the 15th century.

Security forces had been monitoring the smuggling network for three months and launched the first raids on Dec. 12.

Acting on the information extracted from captured suspects, they identified more involved in the smuggling ring.

It was unclear how the gang obtained the artifacts, but security sources said the suspects were planning to smuggle them abroad. The seized artifacts will be handed over to the Istanbul Museum of Archaeology.

"The retrieved artifacts are more valuable than the inventory of an average-size museum," the Istanbul police said in a statement.

The Turkish Archeological Association told Xinhua that it took police and archeological experts days to determine the exact period and draw an inventory of the seized artifacts as "they were so many in a single operation".

Ankara has been fighting for the return of stolen pieces home and abroad. Over the past decade and a half, an increasing number of antique gold coins have been smuggled to the U.S. from Turkey, according to an investigation by the specialized news portal Live Science.

Turkey boasts about 3,000 ancient cities from 42 civilizations, and relies on its rich historical heritage to attract millions of foreigners each year.

"It is certainly a big victory of a single state against smugglers who take the riches of our country for granted. It will be an example to those who consider repeating such a crime," a source from the Turkish Ministry of Culture and Tourism told Xinhua.

"This operation is the result of enhanced vigilance and cooperation in Turkey among different state institutions such as our ministry and different branches of the police to combat illegal antiquities smuggling," he said on condition of anonymity.

In September, Turkey recovered the Roman sarcophagus of Hercules from Switzerland after it was smuggled from the ancient city of Perge in the southern Antalya Province half a century ago.

The sarcophagus, which portrays the 12 labors of Hercules, is now on display in the Antalya Museum. The cultural relic was returned to Turkey following an order by a Swiss public prosecutor in 2015.

In addition, Turkey is also fighting to prevent the smuggling of artifacts to and from Syria, its war-torn neighbor in the south.

Experts say a large number of artifacts were stolen from museums and other facilities amid the turmoil of the Syrian civil war starting six years ago, as smugglers are seeking to sell them in Syria or transfer them to other countries.

Border security and customs officials have been trained to deal with cross-border smugglings, and a list of stolen relics missing in Syria were delivered to experts, border officials and private collectors to be identified.

Unfortunately, looting or the illicit removal of artifacts from sites is still alive, especially in rural and remote areas in Turkey.

Meanwhile, the role of education in preventing illegal archeological looting and smuggling cannot be overstated.

"We cannot emphasize enough the need to incorporate the love of and respect for archeology and ancient history in textbooks and in the official curriculum of schools," Soner Atesogullari, head of the Turkish Archeological Society, told Xinhua.

"If there is increasing awareness of preventing smuggling the country's riches and treasures to foreign countries, it could only prove beneficial for the future," he said.