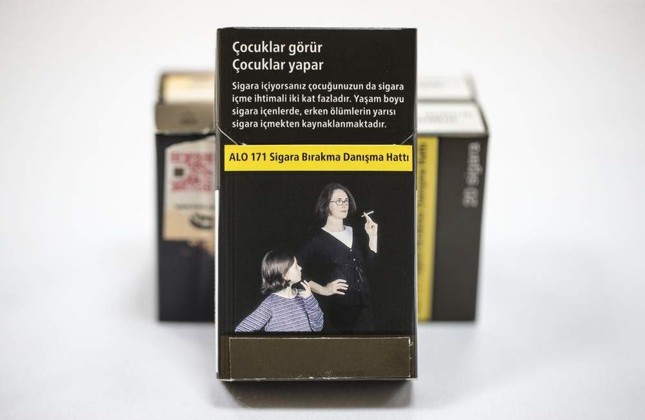 Plain packs will be mandatory starting next month. (Photo: AP)

ISTANBUL, Dec. 5 (Xinhua) -- In a tobacco shop at the iconic Taksim Square in central Istanbul, a couple of men were examining a pack of cigarettes.

They were trying to figure out its brand, as there was no logo, sign or a determinant color. Instead, on the packet was a large picture of a disturbing, diseased human mouth with rotten teeth and an infected tongue.

Ekrem Unlu, owner of the shop, said the pack was the first sample under Turkey's new regulation on plain and standardized packaging of all tobacco products including cigarettes and hookah, which went into effect on Thursday.

Turkey initiated a nationwide smoking ban in public places like restaurants and bars in 2009.

In a written statement, the Ministry of Agriculture and Forestry said writing styles as well as mandatory information on tobacco products are regulated, with dark brown being defined as the single color for all.

"The old boxes were identified by their logos, colors and signs," Unlu said. "However, as you can see, the new boxes contain only the names of the brands written at the bottom with considerably small font."

In contrast, the pictorial warning space is increased to 85 percent on both sides, up from 65 percent, showing disturbing photos of patients who are seriously ill from smoking.

"I'm frustrated by these photos. They make me depressed," said Gokhan Sener, a smoker, as he tried not to look at the photo on the box.

According to Unlu, in most countries in Europe, the photos on the tobacco packages are not as disturbing as in Turkey.

"In that sense, Turkey has become one of the few countries in the world," he said.

Under the new regulation, each package displays one of the 14 new warning messages, such as "Smoking slows blood flow and causes sexual impotence," "Smokers die young," "Smoking leads to premature birth in pregnancy," and "Smoking kills -- immediately quit smoking!"

"The detailed information about tar deposit, nicotine and carbon monoxide rates have been removed," said Unlu. "So that smokers can no longer buy boxes according to their substance rates."

Instead, on the boxes is the warning, "Tobacco smoke contains more than 70 substances known to cause cancer."

In the view of Tangul Yilmaz, a woman in her 60s, smokers are aware of everything, and no warning is needed for them.

She believes, however, the photos of ill children who were severely affected by smoke would be an uttermost deterrent for mothers.

Yilmaz quit smoking for a while, but restarted it recently, taking 10 to 20 cigarettes per day.

"They put something genuinely serious in it to make us addicted," she said, describing her smoke-free days as "delighted."

By taking the new regulation, Turkey is following suit with Britain, France, Canada and Australia, the Turkish ministry said.

Koca voiced his belief that the new move will reduce smoking rates, as it eliminates the entire attractiveness of the old packages.

"Within this framework, we want to develop an awareness and a repulsive and subconscious approach to the harm of cigarettes," Koca was quoted as saying by Haberglobal, an online news portal.