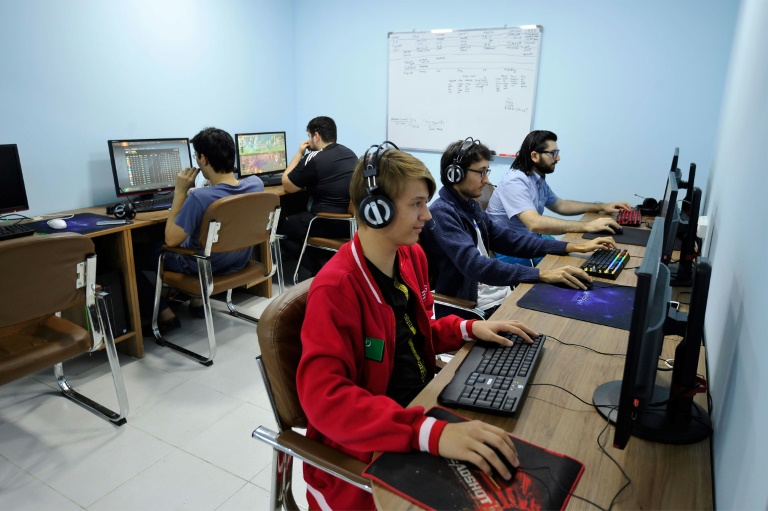 Reclusive, gas-rich Turkmenistan is dipping its toe into the world of eSports having got a taste for gaming at a showcase sporting event it held last year.

The Central Asian country is in the process of forming a national eSports team that will represent it in events devoted to Counter-Strike, Dota 2, Hearthstone and other popular computer game titles.

Denis Oglodin, who plays under the gaming name Den4EZ, has already earned the right to wear the republic's colours after his five-man team triumphed in a national contest for Dota 2 -- a multi-player battle game -- on Friday.

"I've been into computers since I was four. Now I spend 12-15 hours behind a computer," Oglodin, a 17-year-old student at an IT college in Ashgabat, told AFP.

"My parents understand me and aren't bothered by it. My goal (in gaming) is money and glory," he said.

That eSports have arrived in authoritarian Turkmenistan, a country of around five million people which was practically offline just over a decade ago, testifies to gaming's global pull.

The multi-billion dollar industry has even attracted interest from the International Olympic Committee (IOC), and the 2022 Asian Games in Hangzhou could see medals doled out for gaming in spite of opposition from proponents of traditional sports.

For Emil Gasanov, who at 38 is currently the oldest member of the eSports delegation that will represent Turkmenistan in a forthcoming Central Asian tournament, gaming's growing global prestige is exciting to see.

"My hobby has turned into a profession," says Gasanov, who founded one of the capital Ashgabat's first computer game clubs in 1998 and now coaches younger gamers like Oglodin for a privately-sponsored cyber collective called Galkynysh.

Some of the players from Galkynysh competed in an exhibition eSports tournament held in Ashgabat during the 2017 Asian Indoor and Martial Arts Games, a secondary sporting event backed by the Olympic Council of Asia.

Those games also saw Kenneth Fok elected as head of the Asian Electronic Sports Federation, which has emerged as an important advocate for Olympic status thanks to gaming's strong popularity across the continent.

Turkmenistan's eSports adventure was given a boost by the creation of a new national federation earlier this year that has backing from the culture and sports ministry.

Its chief Mekan Eyeberdiev estimates that there are several thousand eSports enthusiasts in the country, 70 percent of whom are students at schools and universities.

"Our task is to popularise this sport in Turkmenistan," Eyeberdiev told AFP, adding that he expected "conservative views" of gaming as a hobby rather than a sport to fade over time.

Obstacles to the growth of a national gaming culture include internet speeds and costs in an economically depressed country where less than one percent of the population was online before authoritarian leader Saparmurat Niyazov died in 2006.

Now authorities claim there are over two million users, but a standard fixed line connection of 256 kilobytes per second costs around 190 manats per month for Ashgabat residents, or $54 according to the official rate, which is prohibitive for many Turkmen.

Overall, however, Turkmenistan could be climbing aboard the eSports train at just the right time.

Vitalii Volochai, a Ukrainian sportscaster with 10 years of experience commentating on Dota 2 tournaments, says the World Electronic Sports Games held for the first time in January last year are offering gamers from smaller countries a chance to shine that they did not have before.

The event, backed by Chinese tech giant Alibaba, is the closest thing eSports has to a football World Cup equivalent, with players competing in national teams and a prize pot of up to $1.5 million per competition.

Dota 2's sponsorship-soaked equivalent of the Champions League, The International, offers even greater winnings than that.

Given broad censorship in Turkmenistan, it is perhaps surprising that the state is throwing its weight behind eSports, some of which feature graphic violence.

That is certainly something that bothers the IOC, whose president Thomas Bach spoke of a "red line" for video games involving killing earlier this year while remaining generally upbeat on the possibility of including them in the Olympic movement.

Volochai, whose Twitter handle has 213,000 followers, says the debate over Olympic recognition is not something most gamers are losing sleep over, however.

"We don't really need the IOC or Olympics -- they need us," Volochai told AFP.