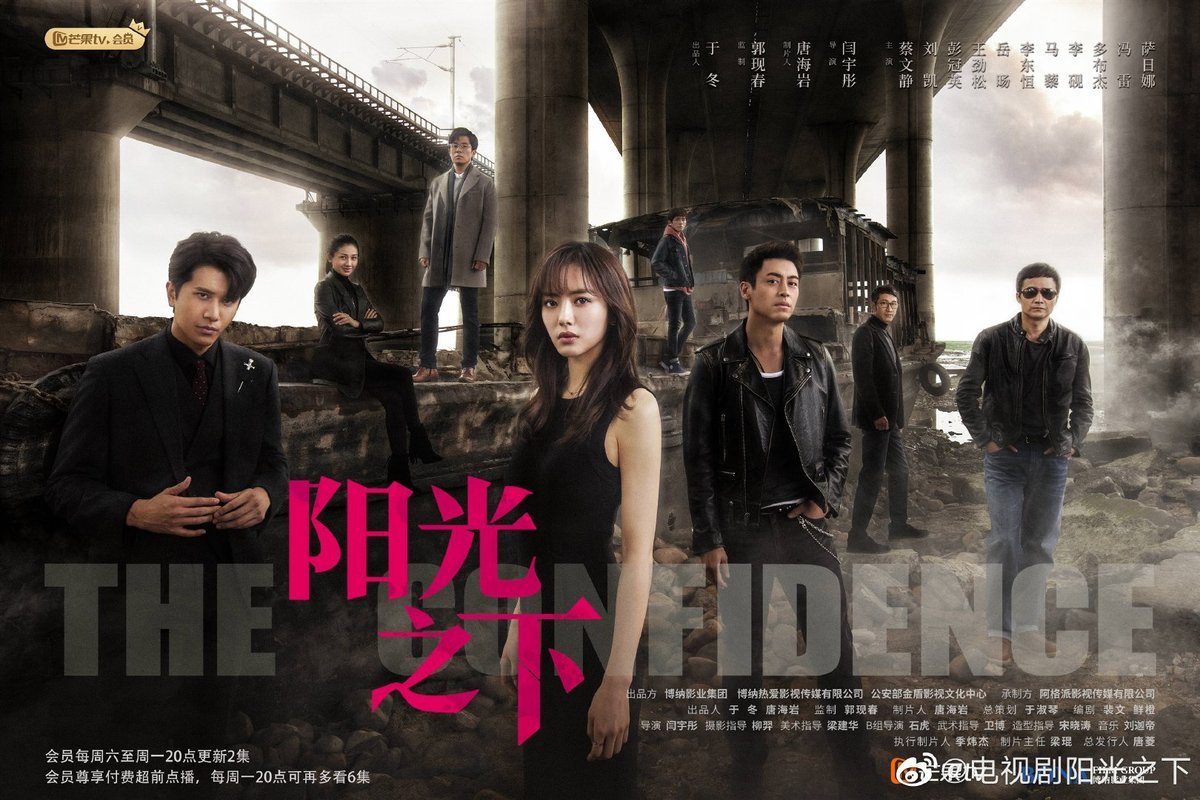 Adapted from the novel The Controllers written by Xian Cheng, The Confidence tells a story of justice triumphing over evil. The heroine Ke Ying fights against a criminal group with wits and courage in order to protect herself and her family, and she joins hands with the hero Xiaowu, a takeaway deliveryman who provides clues for the police. They secretly collect evidence from the criminal group and assist the police and the investigation team to prevent the criminal group from fleeing with enormous sums of money. After experiencing many difficulties, they finally capture the criminals and return to their normal lives.

The Controllers is a romantic novel, while The Confidence is a TV series focusing on criminal investigation. The TV drama follows Xiaowu's development from a takeaway deliveryman to a police undercover agent and the assistance of Ke Ying as the main focus, and touches less on the relationship between Feng Xiaosheng (Shen Shijie in reality) and Ke Ying. The adapted plot leaves more space for the game between justice and evil, which further sublimates the theme of cracking down on criminal activities and highlights the resolution of Chinese police and relevant departments to uphold fairness, justice and the rule of law.

The character who differs the most from the novel is Xiaowu. In the TV series, he is forced to become a member of the violent debt collection group, but he is smart and kind by nature. Under the influence and cultivation of police officer Chen Jinyan, he becomes an undercover agent in the criminal gang to provide clues for the police.

In the final plot, the power of the criminal group headed by Shen Shijie is weakening day by day. Xiaowu could have chosen to escape from the dangerous situation, but he still lurks beside Shen, with the purpose of punishing him according to the law and claiming justice for police officer Chen and other victims. He also does it out of his own conscience. Although he is just an ordinary person, he still hopes to make his small contribution to maintaining fairness and justice.

In addition, Mrs. Lian, the vice-mayor, greatly impressed me. She sheltered the criminal group, embezzled public money, took bribes and planned to abscond overseas. But she finally chose to surrender after her daughter's persuasion. She told her daughter in prison that she could finally sleep well and did not need sleeping pills anymore. As she said, "it feels good to be who I am." If she had lived with integrity and kindness before, and not been seduced by money and power, she would not have been forced to bear so much pressure. We determine our own lives and futures. If we choose to live in the warm sunshine, we will not be afraid of the cold wind in the dark.

In the current society, Chinese people resent corruption the most. In order to ensure the long-term stability of the Party and the country, we must punish both those who take bribes and those who offer them. Meanwhile, we need to improve Party and State oversight systems to ensure that power is exercised under public oversight and in broad daylight, and make sure that officials are honest, government is upright, and political affairs are handled with integrity.

The name of this TV series reflects China's confidence and firm determination to combat evil and maintain social harmony and stability. China upholds the rule of law where all are equal before the law and no extrajudicial privilege exists. Laws must be followed and those who violate them held accountable. As described in the TV series, Chinese police and relevant government departments are making great efforts to crack down on criminal activities in accordance with the law, in an effort to uphold the rule of law, fairness and justice, while also safeguarding China's security.

No matter how dark the night is, the sun will eventually shine on the earth. We should have the confidence to believe that everyone can live in the light.