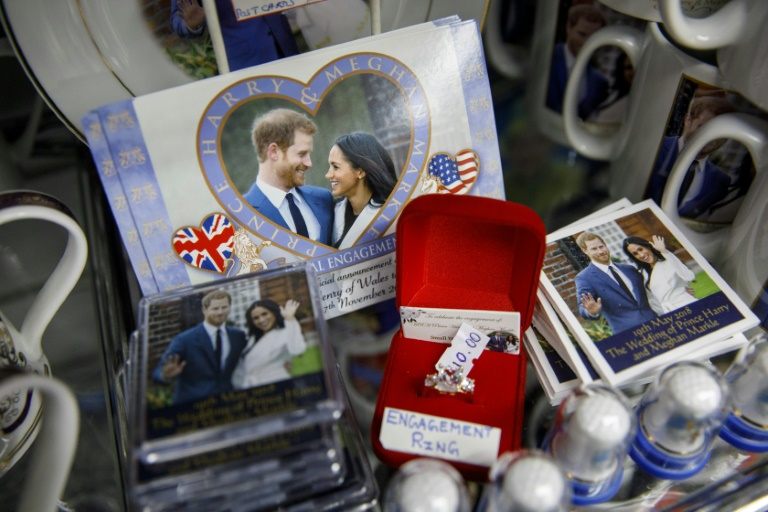 The world has gone crazy for the love story of Prince Harry and divorced mixed-race actress Meghan Markle (Photo: AFP)

An avalanche of royal documentaries is set to flood schedules across the world in the run-up to the marriage of Britain's Prince Harry and the American actress Meghan Markle next month.

"The world has gone crazy for the royal wedding," said Nick Bullen, the king of British royal TV, who has nearly nine hours of programmes in the pipeline for National Geographic, America's Fox network and Britain's ITV.

Rival shows such as "Invitation to a Royal Wedding", about the behind-the-scenes planning for the big day, are among a raft being snapped up by buyers at MIPTV, the world's top TV market in Cannes, France.

"Kate and William was big," said Bullen, referring to the 2011 wedding of the second in line to the throne to the Duchess of Cambridge. "But the Meghan factor has been huge. This is now an American story, one of their own, an American princess," he added.

"The last American to marry into the royal family was Wallace Simpson and look what happened there. That was quite a big world story."

Markle is like nothing the British royal family has ever seen before, Bullen told AFP.

We now have a divorced mixed race actress. She is beautiful, clever and opinionated. She is bringing something to the House of Windsor that has been missing for an awful long time. She is making the Windsors feel relevant to an audience that hadn't considered them before."

African, black and ethnic minority audiences are now relating to the royals in a way they never did before, said the head of Spun Gold films.

That comes on top of "the whole new generation who have been brought to the royals" through the runaway success of "The Crown", Netflix's number one series, Bullen insisted.

His company's history of the family, "The Royal House of Windsor" was also a big surprise hit on the online platform, showing the curiosity they now spark with young audiences.

"The Queen's Wikipedia page has reported record traffic after 'The Crown' as viewers check the plot with the facts," he added.

Bullen, whose company won a BAFTA award for its documentary on the Queen's 90th birthday, said for royal programmes to work they had to have real insight.

"We don't make toadying TV, some people have. But in a world of fake news you need truth at the heart of it, and if you have that you have a hit show."

But he admitted that the Palace had to be kept onside "to keep making these programmes. We keep them in the loop. You have to play with a very straight bat."

Among the other new royal docs being previewed at Cannes is a highly unusual and unexpectedly touching portrait of the Queen.

"The Queen's Green Planet" reveals her lifelong passion for trees, with a "relaxed and funny" monarch taking the naturalist Sir David Attenborough on a tour of the gardens of Buckingham Palace.

The pair, both 91, were born within three weeks of his each other, and have a wonderful screen chemistry, director Jane Treays told AFP.

"They laughed and were quite playful with each other. They have known each other a long time and because of that, we see quite surprising things like her real passion for trees.

"She has spent her life planting trees, and so have her ancestors. It was very beautiful and touching to see how she relates to them, and how much they mean to her. She has a particular love of some London plane trees planted by Queen Victoria", her great-great-grandmother.

The film, made by ITN to highlight the Queen's bid to build a network of global protected forests, will be broadcast in Britain on April 16.

In one hilarious moment, the Queen reveals that her huge collection of new varieties of plants came from people who were unsure of what to get her.

"I've been quite difficult to give presents to," she quipped, "so they've said, 'Oh, let's give her a plant.'"