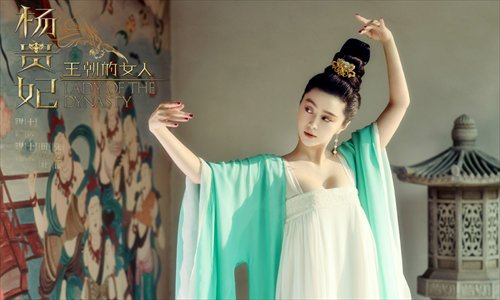 A still from Lady of the Dynasty, starring Fan Bingbing. (Photo: CFP)

China's top television regulator on Tuesday announced that companies and organizations which had overseas sponsorships or made low-quality programs cannot renew their programming license, which observers and employees said would help purify the industry.The National Radio and Television Administration (NRTA) released a regulation on Tuesday, stating that television dramas and program producers should not accept overseas investments, or have shareholders of foreign background. Providing content for overseas broadcasts, attending foreign competitions and festivals without prior approval is also forbidden, the regulation said. Wang Sixin, a media law professor at the Communication University of China in Beijing, told the Global Times on Thursday that the notice is a reminder to domestic companies to be mindful of international cooperation. He noted that "ideological infiltration and money laundering are the biggest concerns in absorbing foreign capital." According to the NRTA, those who made vulgar programs or "have a wrong orientation, negative social impact and poor reviews" cannot renew their license. Companies and organizations that did not pay off their taxes, or participated in fabricating viewership will also not be allowed to renew their license this year. The crackdown on tax evasion in the film and TV industry was sparked by actress Fan Bingbing, who finally paid over 800 million yuan ($116 million). A campaign launched in October asked industry practitioners to make remedial payments to tax authorities before December 31, 2018 to avoid administrative punishment and penalties.Companies and organizations which fail to finish any work in two years are also banned from getting a new license. Li Jian, an employee at a Beijing-based TV drama studio, hailed the regulation as "a filter to identify bad fish in troubled waters." "People rushed to the industry around 2016 amid the nation's supportive policies, such as tax exemptions, but many of them were poorly staffed and unprofessional in making programs," Li told the Global Times on Thursday. "The regulation can weed out the faddish, so the true gold can shine," Li said.  NRTA records show that 8,563 enterprises and organizations received a TV program license in 2015. The number increased to 10,232 in 2016 and almost doubled in two years, reaching 18,728 in 2018. The TV industry has been growing rapidly in recent years, and this appears to be a good time to set the standards straight. Studios following laws  are the source of calm and sustainable development of the industry.