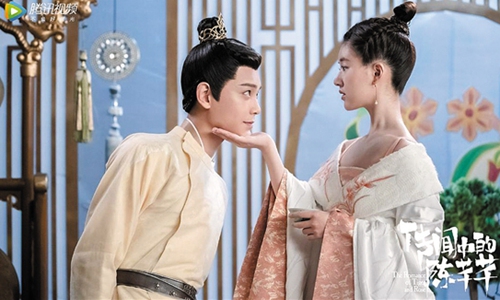 Promotional material of The Romance of Tiger and Rose. (Photo: Sina Weibo)

Chinese online costume drama The Romance of Tiger and Rose has gained a considerable following among Chinese netizens with its creative and romantic plotlines which have tackled some hot social issues such as gender inequality, low birthrate and women's rights.

The 24-episode drama that premiered on May 18 on Tencent Video tells the story of a screenwriter who ends up falling into the very ancient Chinese period drama she is writing a script for. There she finds herself in the role of a supporting character named Chen Qianqian, who is supposed to be poisoned by the male protagonist Han Shuo in the third episode. In order to survive, she works to alter the plot and, after getting involved in a series of hilarious stories, ends up becoming the show's lead female character.

Although the series is a low-budget online drama, it has managed to earn itself a 7.4/10 score on Chinese review site Douban and 897 million views on Tencent Video as of Tuesday, according to Chinese ticketing platform Maoyan.

Many Chinese netizens have found themselves entranced by the drama's interesting premise, the romance that develops between Chen and Han as well as the humorous characters.

In the country where Chen lives, women are the backbone of society while men are in a lower position;while the country from which Han comes is consistent with that in ancient China, where the idea that men are superior to women was prevalent. In Han's country, women are not allowed to work after getting married but must stay home to raise their children, which leads to low marriage and birth rates in his country.

Wu Yu, a 27-year-old white-collar worker in Beijing and a fan of the drama, told the Global Times on Tuesday that although the drama's settings and props are very simple and a bit shabby, the acting and the unique premise have made her very keen about the show.

However, some viewers also think the drama is just trying to use social issues to attract attention.

"Although The Romance of Tiger and Rose responds to current hot spots in society, it has not grasped their importance," Shi Wenxue, a film critic living in Beijing, told the Global Times on Tuesday. He added that while the drama seems to advocate women's rights by flipping gender roles, what it really should be pushing is the concept of gender equality.

Wu echoed Shi's view by saying that "We should not always define ourselves as either men or women, but to think of ourselves as a person, what do we want to do? I think it is totally fine and understandable if a man prefers to raise children at home."