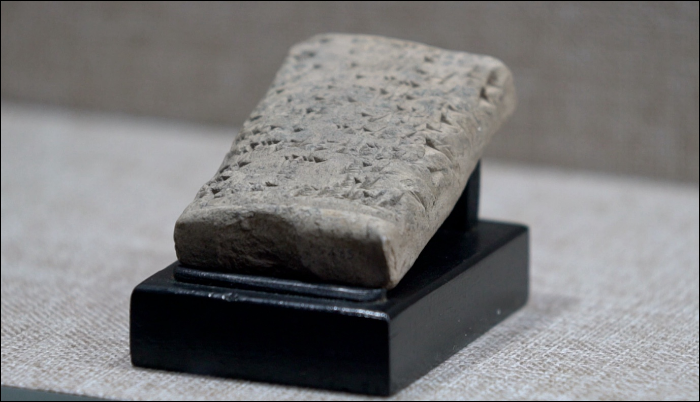 A letter was written on clay by the Old Babylonian King Hammurabi to his official officer in which he said he has returned a piece of the field to its original owner. (Photo: CGTN)

An exhibition featuring two Bronze Age Civilizations – Mesopotamia and the Chengdu Plain – is underway in the southwestern Chinese city of Chengdu, which is impressing the visitors with exquisite artifacts of thousands of years.

"We are trying to tell the public via this exhibition that we should further our understanding of our own civilization from a broader perspective by placing it into the global civilization system and exploring their connections," Zhou Jing, deputy curator of the Sichuan University Museum, where the event takes place, told CGTN.

The visitors can have a glimpse of the highly advanced civilization in ancient Western Asia through scores of antiquities from the Bible Lands Museum in Jerusalem and Yale University's Peabody Museum – a letter written on clay by the Old Babylonian King Hammurabi, Sumerian administrative tablets and cylinder seals, among others.

"I'm impressed by the little exquisite goat. It reminds me of a golden calf exhibited in the Jinsha Site Museum. So I think people of different civilizations and races are consistent in their pursuit of beauty," said Li Ke, a frequent museum-goer.

Also on display are some relics from China's Sanxingdui Museum and the Jinsha Site Museum both in Sichuan Province, including giant masks and jadeware, which form an important part of ancient Chinese civilization.

"After looking around this museum, I'm really informed now about the culture of this particular place (Sanxingdui) that has seen such a rich history," said Narender Kumar, an Indian visitor.

Though the two civilizations are quite far from each other, both chronologically and geographically, experts say, they share quite a few common characteristics.

Wang Xianhua, the chief consultant of the exhibition, said the structural similarities and cultural relevance can be seen from different aspects, such as their cosmological concepts of the universe, or the social governance model.

"Imagine if people from the societies of Mesopotamia and the Chengdu Plain met each other, I believe they would understand each other. In this exhibit, we intentionally select several comparable elements to inspire people to think," said Wang, the director of the Institute for the Global History of Civilizations at Shanghai International Studies University.

Wang said he hopes this exhibition can also serve as a significant attempt to bridge different contemporary cultures, such as those in China and Israel, especially at a time when the concept of "a community of a shared future for mankind" begins to prevail.